2.1 The development of a marine spatial plan is a complex process, combining science, management and politics (Olsen et al., 2014). Undertaking marine spatial planning incorporates ecological, economic and social data to mitigate human impacts on the marine environment and to inform decision-making (Jarvis et al, 2015). It is starting to be introduced from an almost zero baseline (Glegg, 2014). The last fifteen years or so has seen a marked change from management of individual marine sectors, e.g. shipping, military zones, aquaculture, to a more integrated strategic approach (see Douvere, 2008). The evolution of marine spatial planning has therefore been developed out of the need to manage growing use, and therefore at times conflict, between different marine users. This has been coupled with the growing recognition that the marine environment requires protection measures to ensure its ecological quality is maintained and where required, enhanced.

2.2 A key driver for marine planning in Europe is the Marine Strategy Framework Directive ( MSFD) [1] (2008). This set eleven ‘Good Environmental Status Descriptors’ that aim to achieve Good Environmental Status ( GES) of the EU's marine waters by 2020. It also aims to protect the resource base upon which marine-related economic and social activities depend. It is the first EU legislative instrument related to the protection of marine biodiversity, as it contains the explicit regulatory objective that "biodiversity is maintained by 2020", as the cornerstone for achieving GES. The Directive enshrines in a legislative framework the ecosystem approach to the management of human activities having an impact on the marine environment, integrating the concepts of environmental protection and sustainable use. In addition, this was more recently followed by the EU Directive on establishing a framework for maritime spatial planning [2] (2014). This requires member states, other than those landlocked, to produce a maritime spatial plan by March 2021. At UK level, these aims are supported by High Level Marine Objectives ( HLMO) in the UK Marine Policy Statement [3] (2011).

2.3 At the Scottish level, marine planning was trialled in 2006 – 2010 via the Scottish Sustainable Marine Environment Initiative ( SSMEI) project, which was a unique and innovative approach to marine planning in Scotland. It aimed to develop and test new approaches to improve the sustainable management of Scotland's marine environment through the establishment of pilot projects. Designed to build upon and complement existing UK marine initiatives such as the Marine Management Organisation ( MMO) marine planning projects, it aimed to gain an understanding of the nature, value, and management needs of Scotland's marine environment. It also aimed to identify alternative management approaches, with a view to ensuring new management initiatives and possible future legislation resulting in a truly sustainable framework. Four pilot areas were involved: The Firth of Clyde, Shetland Isles, The Sound of Mull and the Berwickshire coast [4] .

2.4 The main driver for regional planning in Scotland is the Marine (Scotland) Act 2010 [5] , which in turn led to the production of Scotland’s National Marine Plan [6] in March 2015. The Pentland Firth and Orkney Waters Marine Spatial Plan ( PFOW MSP) was developed in line with these documents and was also able to draw upon the progress already made by other work in this evolving field of work. Some of the most useful examples are shown in Table1 below, showing both theoretical and practical examples of marine planning.

Stages undertaken to develop the plan

2.5 In order to develop the Plan, the following stages were undertaken as discussed below and summarised in Figures 1 & 2. Marine Scotland initiated a project to pilot marine spatial planning in the PFOW area after discussions between Scottish Government, the Crown Estate, Highland Council and Orkney Islands Council. The main issue discussed was the emerging potential for wave and tidal energy developments and the need to explore marine planning as a tool to minimise conflict and promote sustainable use of the seas.

2.6 The first stage of the project developed a marine spatial plan framework [7] (2010/2011), which defined the overall three stage process used to develop the Plan (see Section 6). This included an interactions matrix that aimed to identify where an interaction was likely to occur between different marine sectors and activities. It also identified the likely extent of the interaction as small, medium or large but did not provide any assessment of whether an interaction was positive or negative.

2.7 The framework was accompanied by regional locational guidance. This aimed to provide guidance to marine renewable energy developers on potential areas of opportunity and progress the marine spatial planning process to enable stakeholders and decision makers to consider wider marine issues.

2.8 In April 2012, a working group was set up that included Marine Scotland and the two local planning authorities, Orkney Islands Council and the Highland Council to progress Stages 2 and 3 of the framework. The aim having the local authorities as part of this group was to provide local knowledge and bridge the gap between national government and local communities. Within a few months, a Plan Scheme (a proxy for a Statement of Public Participation as required by the Marine (Scotland) Act 2010) was produced. It set out the proposed indicative timeline and processes for developing the marine spatial Plan. This was circulated via a data base of stakeholders, which was set up and added to throughout the plan-making process. It was made up of over 250 representatives from a wide range of organisations and individuals with an interest in at least one element of the marine activities covered in the Plan.

2.9 Before the Plan was drafted, a series of options for the type of issues that should be covered were consulted upon in July 2013. This was in the form of a Planning Issues and Options Consultation Paper (known as the ‘ PIOP’). This was circulated to all the stakeholders and a series of public events were held in Caithness and Orkney. These included round-table workshops with representatives of many of the key industries, statutory agencies, local councillors, environmental and leisure non-governmental organisations ( NGO) and interested individuals. The information gathered greatly helped in shaping the draft Plan and ensured public engagement from an early opportunity (see Section 8 for further information).

2.10 The marine plan was then drafted by the working group which consisted of one full time member of staff from Marine Scotland and two 0.5 full-time equivalent ( FTE) staff from Orkney Islands Council and Highland Council respectively (see Section 3). It was underpinned by a series of documents, including those statutorily required and others developed to inform the plan-making process. These included a Sustainability Appraisal consisting of a Strategic Environmental Assessment, Socio-Economic Assessment and a Habitats Regulations Appraisal Record; a Business and Regulatory Impact Assessment ( BRIA), an Equality Impact Assessment ( EQIA), a Socio-Economic Baseline Review, Regional Locational Guidance and a Post Adoption Statement. These were produced with significant input from other Scottish Government staff (see Sections 3 & 7 & Appendix 4 for more details).

2.11 The following Sections 3 - 8 provide information about the lessons learned from developing this marine spatial plan, split by key themes that should be considered when developing a subsequent statutory regional marine plan. Each section lists then discusses the detailed processes and effectiveness of each of these elements and general considerations. This is followed by a wider discussion then a list of supporting evidence: where applicable, details of this evidence can be found in the appendices. Given the integrated nature of the process of developing a marine plan there will be an element of cross-over in the topics covered. However, this only highlights the need for careful planning of all the elements required to produce an effective, integrated marine plan with appropriate stakeholder and community engagement.

2.12 Sections 9 - 10 discuss the lessons learned in relation to the effectiveness of the overall plan-making process and future considerations, followed by conclusions and a summary of key challenges and what worked well in Section 1. 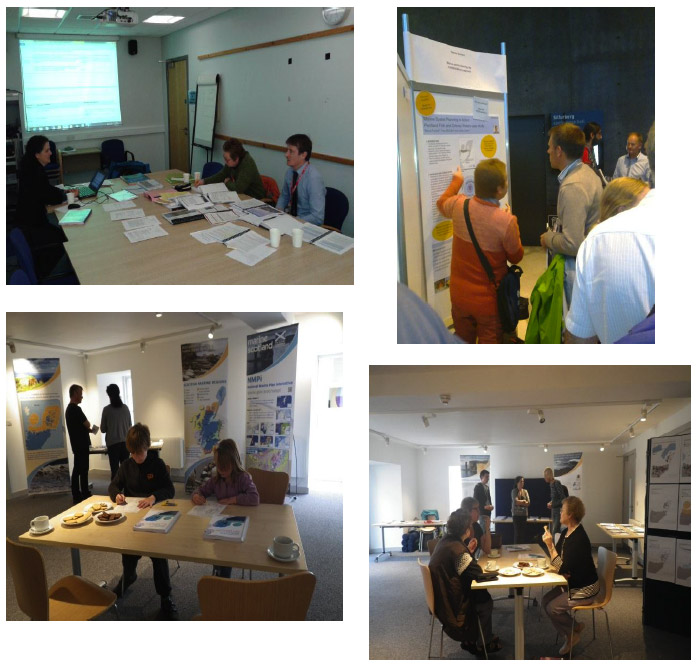 Clockwise from top left: Working group, Reaching out to international audiences in Reykjavik, Engaging audiences of all ages in Stromness.