Figure B.1. Plan showing the location of geophysical traverses on a proposed turbine base for the Farr Wind Farm, Scotland. These included Ground Penetrating Radar ( GPR), resistivity R and P-wave Seismic

Geophysical survey techniques may provide an alternative non-intrusive method for investigating peat environments. These technologies measure the vertical and lateral variation of physical properties of the ground. They are particularly useful in areas where biodiversity and other environmental issues preclude the use of more invasive methods (such as trial pits and drilling), although in general, geophysical methods should be used to support more traditional intrusive techniques.

The type of instrument, methodology and resulting interpretation will depend upon the anticipated physical properties of the peat, underlying geology, anticipated depth of the peat-substrate interface, topography, hydrogeology, and the presence of fences, cables and underground utilities which may cause geophysical noise.

This consists of a radar antenna transmitting electromagnetic energy in pulse form. Measurements are taken of the time taken for the radar pulse to be reflected from a stratigraphic interface. Partial reflections occur at interfaces with different geoelectrical properties (within the solid and superficial geology). Information is provided on the depth to bedrock ( i.e. thickness of peat and superficial deposits). In general, clay-rich and water saturated soils have a lower penetration than gravel and dry soils. However, signal penetration and resolution limits are also influenced by the frequency of the transmitted electromagnetic pulse. High frequencies give better resolution and shallow penetration. Lower frequencies give lower resolution and deeper penetration.

This method measures small changes in the electrical resistance of the ground between an electrode rray; this provides an indication of the depth to the base of the peat. For example, the two-dimensional Wenner resistivity array may be used, whereby four electrodes are placed in a line in the ground and a current is passed through the two outer electrodes. The potential difference is measured across the two inner electrodes and the resistivity is calculated.

This method measures the velocity of refracted seismic waves through superficial deposits and bedrock. The sonic pulse is artificially introduced into the ground. Readings are taken using geophones connected via a multi-core cable to a seismograph. This determines the depth to, and nature of the superficial deposit/bedrock interface. Stiffer and stronger materials usually have higher seismic velocities, while soft, loose or fractured deposits have lower velocities.

The magnetometry method involves the measurement of variations in the magnetic field of the Earth caused by local differences in the magnetisation of the subsurface rocks, for instance where the minerals magnetite or hematite are present. The standard instrument is the proton magnetometer. The instrumentation has a microprocessor control to record the data for downloading to a computer at suitable points in the survey. Other types of magnetometer include magnetic balance, fluxgate and nuclear resonance. A magnetic survey is rapid and easy to carry out and a site can be surveyed with a close grid spacing (often 1m) at low cost.

The gravity method involves the measurement of variations in the gravity field of the Earth caused by local differences in the density of the subsurface rocks. Microgravity surveys, using the La Coste Romberg system, have been used in the detection of natural cavities and voids (or pipes).

Figure B1. Plan showing the location of geophysical traverses on a proposed turbine base at the Farr Wind Farm, Scotland. These included Ground Penetrating radar ( GPR), resistivity (R) and P-wave Seismic. 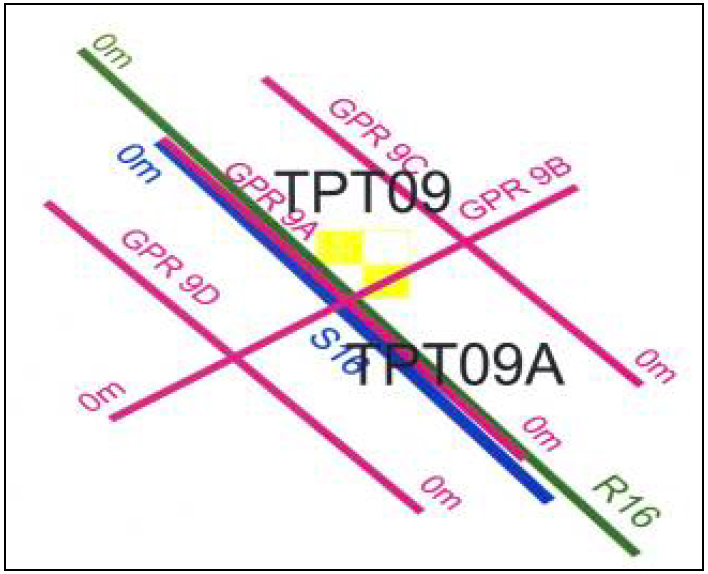 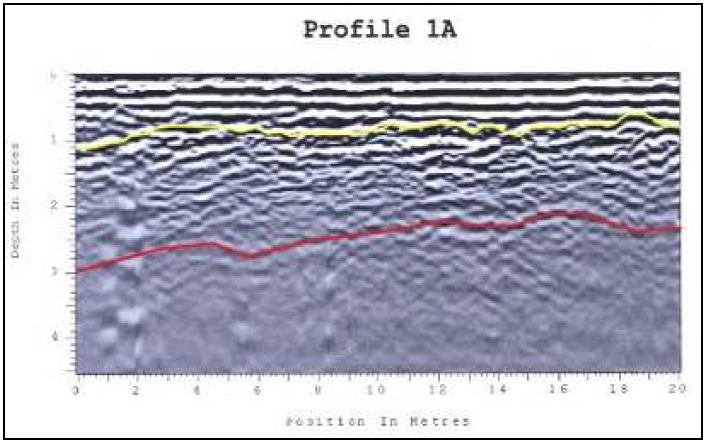 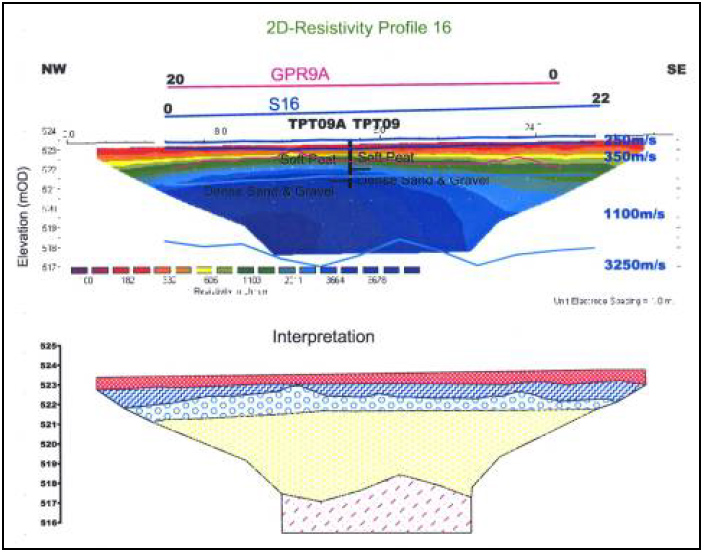