"We chose Ward 10, a medical ward with a mix of specialties (including Rheumatology, Infectious Diseases, Gastroenterology and Haematology) because its complexity made it an ideal exemplar ward. The Senior Charge Nurse was very motivated and improvement-focused, having already introduced new ways of working to prepare for the move to the new hospital. We began implementing Daily Dynamic Discharge on this ward in September 2016."

The hospital's Health Intelligence Analyst produced an activity profile for the ward focussing on the daily admissions and discharges across the week. In common with the rest of the hospital, the largest number of discharges from Ward 10 occurred on Fridays. The main reasons for this was that the weekly ward multidisciplinary team meetings took place on Thursdays. Actions from these meetings were addressed which resulted in patients being ready for discharge on Fridays.

"The data has always been readily available via the dashboard, but seeing it in front of them in black and white really brought home to staff the urgent need for change."
Bill Mitchell, Health Intelligence Analyst

Figure 4: Ward 10, Admission and Discharge Numbers By Day of Week 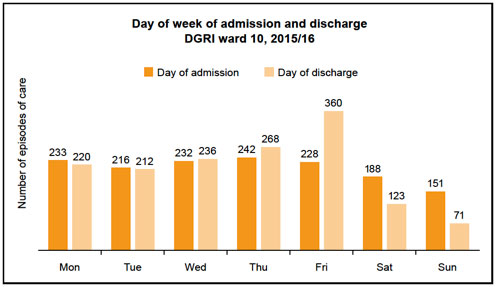 The data showed that demand outstripped capacity on four days per week, with the site relying on the additional Friday capacity to make it through the weekend. 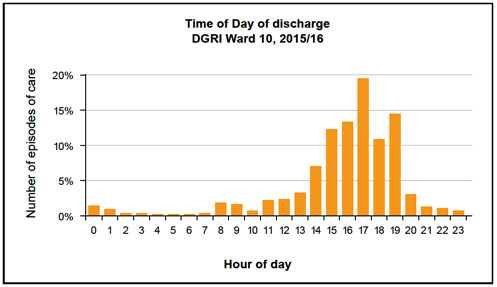 The majority of Ward 10 discharges took place in the afternoon and early evening, with a peak of 71% between 3pm and 8pm.