In August 2018, the Scottish Government launched its Suicide Prevention Action Plan; Every Life Matters[1]. This built on and succeeded previous Scottish Government strategies, the Choose Life strategy and action plan (2002–2013)[2] and the Suicide Prevention Strategy (2013–2016)[3]. Many individuals, communities and organisations have worked tirelessly to prevent suicide for many years in Scotland and those efforts have been described by other nations as an exemplar. Every Life Matters is the product of extensive engagement with people affected by suicide, people in local government, mental health and suicide prevention organisations, academics and members of the public.

The National Suicide Prevention Leadership Group (NSPLG) was established in September 2018 by the Scottish Government to support the delivery of Every Life Matters. Membership reflects a broad range of delivery partners involved in suicide prevention, and includes those with lived experience of the impacts of suicide. Our remit, minutes and other publications of interest are available online[4]. We report and make recommendations to Scottish Ministers, and to COSLA on matters under the responsibility of local government.

From the outset, we have sought to ensure that the voices of those affected by suicide are central to our work. Two members of our group have joined us because of their lived experience and with the support of the Health and Social Care Alliance, we have been able to discuss our work directly with people who are living with the impact of suicide. We have now established a Lived Experience Panel and Network to maintain that broad engagement throughout our work. This will include those who have been bereaved by suicide; are caring for someone who has attempted suicide or has suicidal thoughts; and/or have experience of suicidal thoughts or attempted suicide themselves. This Panel and Network will be hosted by a collaboration of third sector Mental Health organisations: SAMH, Samaritans, Support in Mind (Scotland) and Penumbra.

To support our work, we have established an Academic Advisory Group (AAG), drawing on the wealth of academic and research expertise in Scotland. It aims to keep the NSPLG informed of cumulative and recent research findings as well as contributing to the development, implementation and evaluation of Every Life Matters. The AAG is co-Chaired by Professor Rory O'Connor of the University of Glasgow and Emeritus Professor Steve Platt of the University of Edinburgh. 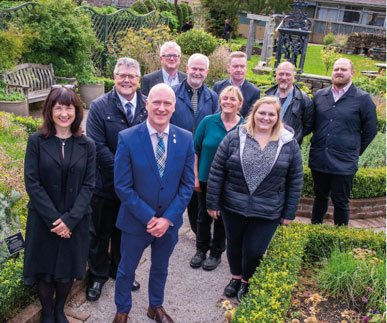 We believe that public health reform in Scotland presents a further opportunity to take a comprehensive whole system approach to suicide prevention. If we place suicide in the context of efforts to improve physical, mental and social wellbeing and resilience, then suicide prevention will be part of all we do.

We welcome the forthcoming launch of Public Health Scotland on 1 April 2020. This will be Scotland's lead national agency for improving and protecting health and wellbeing and its leadership role in suicide prevention for Scotland will therefore be critical.

Suicide rate has reduced by 19% over the past 10 years.

Between 2002-2006 and 2013-2017, the national rate of deaths from suicide has decreased by 20%. However, while it is welcome to see such a clear overall reduction in suicides, the National Records of Scotland (NRS) recently published data on the number of probable suicides in Scotland 2018[6] which showed a 15% rise in probable suicides between 2017 and 2018. We must acknowledge that a single year of data should not be over-interpreted: several years of data would be required in order to establish a clear trend. Nevertheless, an increase such as that seen between 2017 and 2018 is highly unusual and a similar increase has also been observed in England and Wales.

The increase in suicide in the 15-34 age groups, particularly among women, is a notable change in 2018 compared to 2017. However, the highest numbers and rates of suicide continue to be found in the 35-54 age groups for both women and men. We believe it is important to maintain a focus on the latter group whilst also devising strategies and mechanisms of support for young people, particularly young women.

To help drive progress, Every Life Matters sets out an ambitious target to reduce the rate of suicide in Scotland by a further 20% by 2022 (from a 2017 baseline), extending beyond the World Health Organization 2013 target of a global 10% reduction by 2020.

We have found that people affected by suicide and involved in suicide prevention appreciate the power of an ambitious target in focusing effort and resources. Nevertheless, the 2018 NRS data[7] demonstrates how the scale of the challenge has increased. We consider that this context underlines the importance of striving to make suicide prevention everyone's business and of maintaining our shared ambition to save lives.

For our part, we will continue to focus on the vision of Every Life Matters where suicide is preventable and no longer stigmatised. And of a Scotland where help and support is available to anyone contemplating suicide and to those who have lost a loved one to suicide. We believe it is important to evaluate the effectiveness and progress of Every Life Matters and its 10 actions, and we will identify any additional actions as appropriate, supporting Scottish Government, COSLA and other partners to redouble their suicide prevention efforts over the life of the action plan.

The annual report from the Scottish Suicide Information Database (ScotSID) will be available in coming months[8]. NHS National Services Scotland (NSS) have been exploring how to make ScotSID more interactive and intend to engage with users of the data to that end. We welcome this approach; local data to support local suicide prevention planning is essential and we will be monitoring developments closely.

Recommendation 1: We recommend to the Scottish Government and COSLA that the progress and effectiveness of Every Life Matters and its 10 actions are evaluated, in line with World Health Organization advice.

Recommendation 2: We recommend to the Scottish Government and COSLA that the provision of timely and accessible data about suicides must improve. Suicide prevention planning at a local and national level is dependent on good information and the ability to share it appropriately. The development of ScotSID as an interactive and local resource should be supported with appropriate engagement and barriers to sharing information should be tackled with vigour.