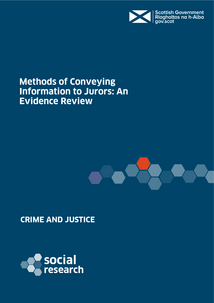 The purpose of this review is to identify methods by which juror recall and understanding of evidence and directions might be enhanced, and to evaluate both the empirical evidence ( i.e. the academic literature) relating to these methods' effectiveness and the extent to which they have been adopted in other jurisdictions. The rationale for the review is that there is evidence to suggest that jurors face considerable challenges in recalling both the evidence and the legal directions in a criminal trial and that they struggle to understand legal directions. The deliberation process - whereby individual jurors pool their knowledge - assists to some degree in terms of remembering the evidence but it is less effective at improving the comprehension of legal directions.

Eight methods of improving memory and/or comprehension are identified and discussed: trial transcripts, juror note-taking, audio-visual and digital presentation methods, juror questions, pre-instruction, plain language directions, written directions and structured decision aids (routes to verdict). Aside from juror note-taking, none of these methods are routinely used in Scotland at present.

The review draws on empirical research relating to the eight techniques identified above, primarily from 2000 onwards, but it also includes a number of significant studies published prior to this date. It covers the main English speaking jurisdictions that use juries in criminal cases, namely England and Wales, Ireland, Northern Ireland, Canada, the Australian jurisdictions, New Zealand, and the US jurisdictions. It includes Government evaluations, reports by independent research institutes, and peer-reviewed studies conducted by academic researchers, often but not exclusively published in psychology journals.

The empirical studies have used two main methods: field studies and mock jury studies. Field studies are undertaken with real jurors who have sat on real criminal cases. Mock jury studies simulate the experience of sitting on a jury by recruiting members of the public to act as jurors and asking them to engage with simulated trial materials. Both types of study can provide useful evidence, but mock jury studies need to be carefully evaluated in terms of the realism of their research methods.

Key Findings from the Empirical Evidence

The empirical evidence suggests that the most effective ways of enhancing juror memory and understanding are juror note-taking, pre-instruction, plain language directions (including written directions) and the use of structured decision aids (routes to verdict). Each of these methods targets different issues (some improve memory, some improve understanding and application of legal tests) and there is evidence to suggest that they are best used in combination, rather than as alternatives.

Juror note-taking refers to the practice of encouraging jurors to take notes during the trial and providing them with materials to do so. There is a substantial body of evidence from good quality empirical studies to suggest that this improves juror memory of the evidence. Recent studies have suggested that providing jurors with trial-ordered notebooks (structured notebooks that help jurors to organise their notes) is particularly beneficial in this respect and may assist jurors who are not skilled at note-taking. These findings are particularly pertinent in the Scottish context, where trial judges do not routinely summarise the evidence, and so jurors need to rely more heavily on their memory than they might have to in some other jurisdictions.

Pre-instruction refers to the practice of directing jurors on the substantive legal issues in the case before evidence is led. There is a considerable body of evidence from good quality empirical studies to suggest that this improves comprehension and memory of the evidence. Despite concerns that it might cause jurors to reach their verdict decisions prematurely, there is no evidence that this is the case.

Written directions involve providing jurors with a written copy of the legal directions in the case. There is a substantial body of evidence from good quality empirical studies to suggest that this is highly beneficial not only in terms of memory but also in terms of understanding. There is also considerable evidence that jurors who are provided with written directions find them useful. Improvements in understanding tend to be limited to improvements in simple comprehension - in other words, they help jurors to remember and re-state those directions. The evidence on whether they help jurors to gain a deeper understanding of directions is more equivocal.

A structured decision aid (referred to here as a 'route to verdict') is a series of primarily factual questions - which might be presented as a series of written questions or in diagrammatic or flowchart form - that gradually lead jurors to a legally justified verdict. Routes to verdict are a relatively recent innovation and the evidence base is still developing. The evidence that does exist (particularly from the better designed studies) suggests that, compared to simply giving jurors a written copy of the trial judge's directions, routes to verdict are more effective at improving 'applied' comprehension - that is jurors' ability to correctly apply legal tests to the evidence. Oral directions should be tailored to the route to verdict provided, otherwise there is a danger that jurors ignore the route to verdict.

In terms of other methods of conveying information to jurors, there is little empirical evidence relating to the provision of trial transcripts to jurors. The evidence that does exist suggests that juror note-taking is more effective as a memory aid than providing a full transcript of the evidence. There is also only a small evidence base on the use of audio-visual methods of conveying information. The evidence that does exist shows that this can be helpful in improving juror memory for both evidence and legal directions (although in relation to directions, the more obvious way to target this is through written directions or structured decision aids). There is a lack of evidence at the time of writing on the use of digital decision aids, such as providing information to jurors via a tablet or laptop, although there is a study in progress on this issue. The only mock jury study that has examined the effect of allowing jurors to ask questions during the trial concluded that it did not improve juror comprehension of scientific evidence.

Reform and Practice in Comparable Jurisdictions

It is possible to determine where particular techniques have become established or explicitly sanctioned in other jurisdictions through a range of sources such as standard judicial instructions, the reported decisions of the courts, recommendations from official bodies, surveys of judges, or specific provisions in legislation or court rules. A review of these sources was undertaken in a range of jurisdictions, namely Australia, Canada, England and Wales, Ireland, New Zealand and the US. This indicated that juror note-taking and using written structured decision aids are well-established across the jurisdictions surveyed, with some jurisdictions using additional written directions to capture points that are not contained in the structured decision aid. Pre-instruction is also clearly established as good practice in a number of jurisdictions.

The provision of transcripts to the jury has become more common in recent years, but remains the exception rather than the rule and has been resisted in a number of jurisdictions. The practice of jurors asking questions is generally discouraged across the jurisdictions surveyed. There is limited available evidence on the use of audio-visual methods of conveying information and plain language directions, although this may reflect only which practices are recorded in the materials surveyed rather than suggesting such methods are not used.

None of these techniques, with the exception of juror note-taking, is established practice in Scotland, although occasional use has been made of written directions.