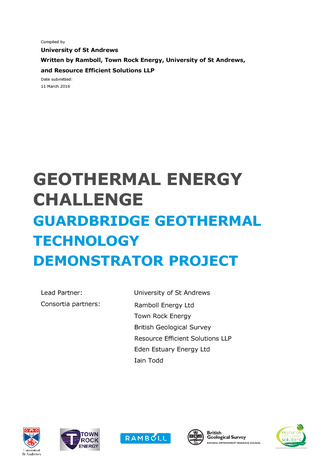 Once all nearby areas of demand had been identified, a preliminary network layout was drawn in ArcGIS. This network targeted all of the key points of heat demand that had been shown in the analysis of the heat map data and was designed in separate phases to evaluate different scales of network build out. These different phases and areas can be seen below in Fig. 6.1. 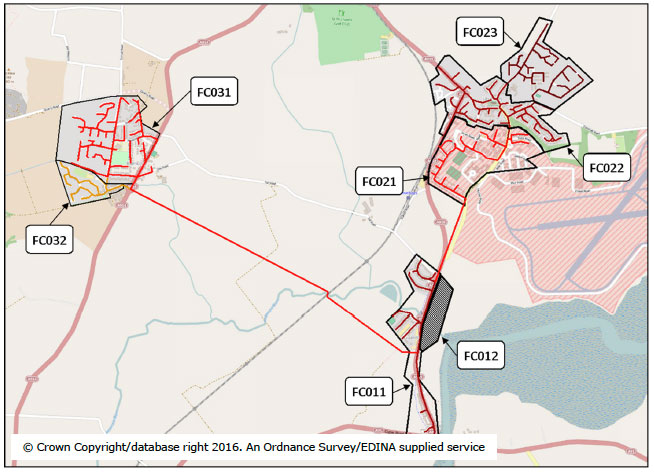 For any build-out scenario, this section of network would likely be the first as it is located next to the site of the Guardbridge Energy Centre. There is a relatively small demand from the residential properties in Guardbridge itself, although there are plans for more housing to be built in the coming years. While this provides a good starting point, a large part of the network demand will come from the future developments at the old paper mill site. This will come in two phases, the first of which is due to be completed in 2017, and a second is scheduled for some time after 2020.

This option is the second phase of development at the Guardbridge site. The site will consist mostly of research and commercial space and is estimated to have a total demand of approximately 4,500 MWh. Such a large demand close to the site of heat generation should be an advantage to any network.

Although supplying Leuchars would require a large amount of connecting pipework, the military housing particularly represents a good source of potential demand and has the advantage of being a single customer which can provide better demand security. An extension into the military base also has the advantage of opening up the network to supply residential demand throughout Leuchars and could help to make full use of the site's geothermal potential.

The second phase of the Leuchars expansion would reach out in either direction along the main road through the town centre. This has the potential to supply both residential and local commercial customers and as the main connecting pipework is already in place, should help to raise the linear heat density ( LHD) of the system as a whole.

Phase three of the Leuchars expansion spreads out to the northeast to reach the local primary school and an area of council-style blocks of houses that should have a relatively high heat demand density. While there is good demand in this area, it should be noted that the area is less densely packed than the rest of Leuchars and so it may not be economically viable to extend the network this far for a lower than usual demand.

To the west of Guardbridge is Balmullo, a residential area of moderate density with a significant annual heat demand of approximately 8.5 GWh. However, the connecting pipeline required to get to Balmullo is almost 7 km in length, and although the majority of this could be done through soft ground, the railway line to cross is a major issue as discussed in Section 5.1.

This second phase in the Balmullo arm of the network is a small extension into an estate of newer build private properties. These are large houses and so the area has a good level of heat demand density, however these figures could be based on benchmarks and in reality newer builds will be more energy efficient and will likely not be willing to pay again for a new source of heating.

The District Heating Opportunity Assessment Tool ( DHOAT) developed by Ramboll for the Scottish Government was used to analyse the heat map data and preliminary network designs. This tool provides clear indications of what the peak and annual demands would be at each stage of the network's development, as well as providing a preliminary set of key performance indicator ( KPI) data, including:

The outputs of each scenario can be compared against one another to determine which would be most suitable for the heating network. This decision is based on both the technical figures derived from early modelling, as well as knowledge of the local property types, potential connection issues and any commercial and construction hurdles, such as the railway line that would have to be crossed to reach Balmullo. Another useful KPI to determine the performance of the proposed networks is Linear Heat Density ( LHD); this is a ratio of demand to pipe length (MWh/m) and can provide a good early stage indication of whether the network has enough demand to justify the initial capital costs of pipe installation.

Table 6.1 presents the initial analysis for the proposed networks. There is a significant variation in the linear heat density between the various options that show quite clearly how additional transmission pipe can significantly decrease the potential of a network. The table also provides approximate estimates of the required primary heat supply capacity which will later be compared against the predicted heating potential of the geothermal resource under Guardbridge, in order to determine what extent of network would be feasible.

The LHD for the first Leuchars connection is low in comparison to the two residential extensions (Table 6.1); this is because it bears the burden of the initial transmission pipe to reach Leuchars and so has a large section of network with no customers. However, provided there was enough heat available, this network option would allow the better performing sections to connect, improving the networks overall LHD and so its apparent poor performance should not be a reason to discount it from the study.

Similarly, the two phases of network in Balmullo have very different values for their linear heat density. However in this case, the first network actually reaches most of the demand in Balmullo and so the phase two extension would not provide enough demand to raise this significantly. Coupled with the additional hurdle of negotiating a railway crossing, a heat supply to Balmullo is not considered in any more detail in this report.