1.1 Purpose of the guidance

This guidance sets out the process that responsible authorities should follow when developing and implementing their Surface Water Management Plans ( SWMPs). SWMPs should reduce the risk of surface water flooding in the most sustainable way as required by the Flood Risk Management (Scotland) Act 2009 (the “ FRM Act”).

The principles advocated can be applied to manage surface water flooding in any area and at any geographical scale. Nevertheless, responsible authorities should prioritise planning in those areas identified through the Flood Risk Management Strategies ( FRM Strategies) and Local Flood Risk Management Plans ( LFRMPs) as being at greatest risk of surface water flooding.

This guidance has been developed by the Scottish Advisory and Implementation Forum for Flooding ( SAIFF), which includes representatives of Scottish Government, local authorities, Scottish Water and the Scottish Environment Protection Agency ( SEPA).

The FRM Act established a six-year cyclical planning process for assessing and sustainably managing flood risk. Its aim is to reduce the adverse consequences of flooding from all sources, including surface water flooding ( Figure 1.1). The FRM Act requires SEPA to produce FRM Strategies and lead local authorities to produce LFRMPs.

The first FRM Strategies published in December 2015 [1] identify around 100 towns and cities where SWMPs are required.

Surface water flooding is a significant problem in Scotland. The FRM Strategies published by SEPA in 2015 estimate that it is responsible for 23% of annual average flood damage (see Box 1.1 and Figure 1.2 for further information). Moreover, the risk of surface water flooding is likely to increase in the future as a result of climate change, the loss of green space in urban areas and, potentially, new development. It is therefore important that land use planning policies take such risks into account when considering new development ( Figure 1.3). 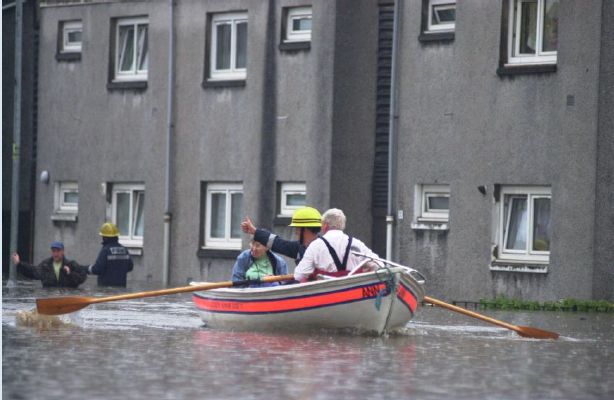 Flooding in Cockenzie Street, Glasgow 2002.
Photograph courtesy of The Herald and Times. 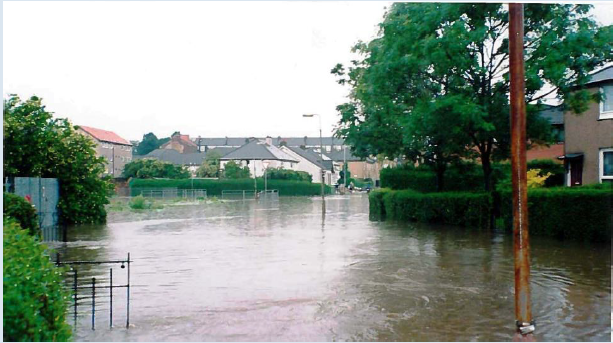 Significant surface water flooding occurred in Glasgow on 30 July 2002, when around 75mm of rain fell in ten hours. The storm had a number of high intensity periods of rainfall interspersed with periods of low or no rainfall. Within the periods of high intensity rainfall, intensities equivalent to 94.5mm per hour were recorded (but for a very short period of time). This rainfall event was estimated to be a 1:100 year return period. Most of the resultant flooding was caused by surface water including surface water run-off, flooding from sewers and other artificial drainage systems and flooding from small urban watercourses.

The East End of Glasgow was the worst affected, with 200 people evacuated from their homes. Flooding and landslides disrupted rail travel, closing routes on the West Coast and Glasgow to Edinburgh via Carstairs lines as well as Queen Street station. A number of roads were also badly affected, including the A82 and A8. The cost of the damage was estimated to be in the region of £100 million.

1.4 What is surface water flooding?

In natural (undeveloped) catchments, when rain falls some of the water will evaporate directly back into the atmosphere (evaporation) and some will infiltrate the ground; some of the latter will then be taken up by vegetation and evaporate back into the atmosphere (transpiration). Any excess surface water run-off will then drain, via a network of smaller drainage channels, watercourses and lochs, to the sea. During higher rainfall, watercourses can reach their bankfull capacity and overflow on to floodplains ( Figure 1.4).

Development and urbanisation has fundamentally altered this natural drainage process. Removing vegetation and building over green space reduces infiltration and evapotranspiration. This increases both the volume and rate of surface water run-off in urban areas. This increased run-off, combined with the replacement (or removal) of some watercourses and other natural drainage features with drains and culverts (that have a finite capacity), causes flooding, when surface water cannot reach watercourses or the drainage network, or when the drainage network capacity is exceeded. When the surface water run-off reaches watercourses, it can also exacerbate river flooding ( Figure 1.4).

For the purpose of this guidance, the term surface water flooding includes flooding from the following sources:

It is not possible to build underground urban drainage systems that are large enough to accommodate the most extreme rainfall events. Instead extreme rainfall and resultant surface water run-off must be managed safely above ground avoiding harm to people, homes, businesses and other adverse impacts of flooding.

Co-ordination between authorities using multidisciplinary teams (including landscape architects) is important to ensure that surface water management infrastructure integrates with and enhances the urban landscape. This is essential to ensure that management of surface water realises multiple benefits e.g. contributing to providing attractive and inviting places for people, managing rainfall and surface water flooding, reducing surface water in the sewers, improving the quality of the water environment, increasing biodiversity and making the urban environment more adaptable to future change. To help achieve this, the principles of sustainable surface water management set out in Table 1.1 should be followed (see examples in Figures 1.5, 1.6).

Good examples can be seen in Denmark and the Netherlands where landscape architects have led on the design of multifunctional urban landscapes using nature-based solutions that deliver these multiple benefits, including management of rain and surface water flooding (Boxes 1.2, 1.3).

Figure 1.6 Design for all rainfall events 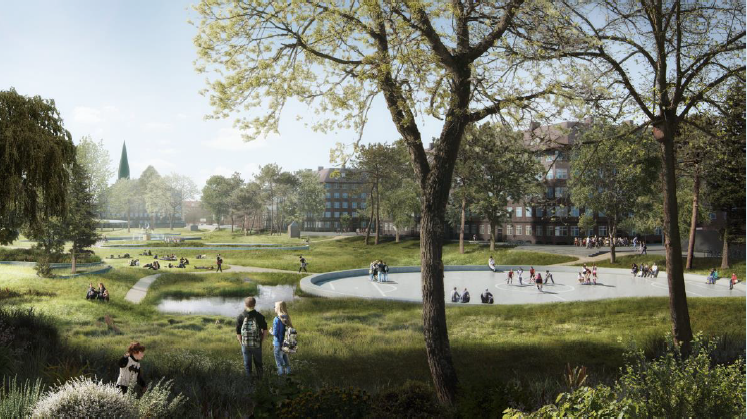 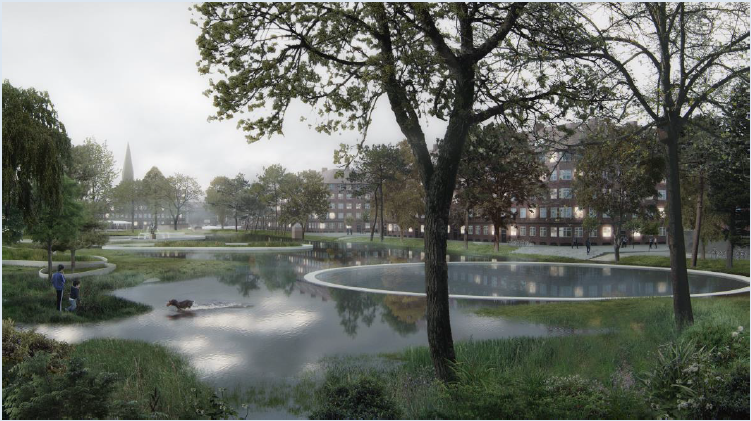 Proposals for the Nørrebro neighbourhood of Copenhagen by SLA landscape architects
http://www.sla.dk/en/projects/hanstavsenspark 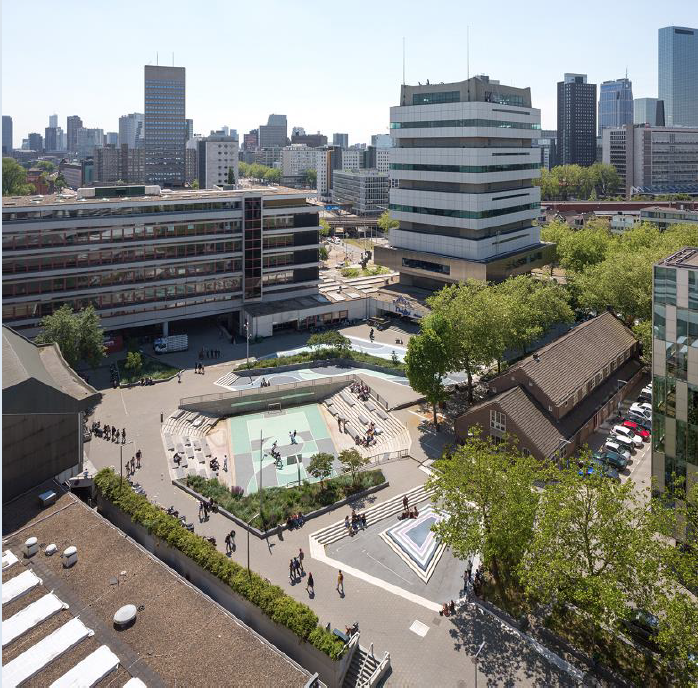 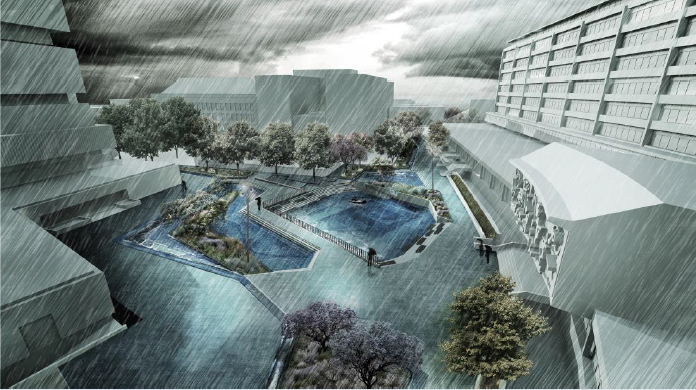