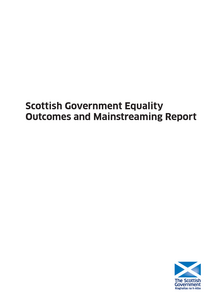 2.1 The Scottish Government is committed to improving the outcomes for the people of Scotland, and to addressing the significant inequalities that we know exist in Scottish society. Our policies and programmes reflect that ambition but we know that there is more that we can do. The Equality Outcomes that we set will help us to make further progress and to make a difference.

2.2 The Scottish Government has developed a set of outcomes which cover the following protected characteristics:

2.3 Our intention is to improve data collection and evaluation, transparency and accountability. Our Equality Outcomes add value to work already in progress and provide real opportunity to examine our role as an employer and as a public policy maker. They are positioned at the heart of our improvement agenda to raise the standard of performance against the Equality duty.

2.4 "Equality Outcome" means a result that the Scottish Government aims to achieve in order to further one or more of the needs mentioned in section 149(1) of the Equality Act 2010.

2.5 Equality Outcomes in this report generally are set to cover the functions for which that body is responsible. So our outcomes do not cover activity for which other public bodies are responsible. Local authorities, health boards and other public authorities covered by the legislation will set outcomes which relate to their responsibilities.

2.6 "Equality duty" means the duty to have due regard to the need to eliminate unlawful discrimination, advance equality of opportunity and foster good relations.

2.7 The public sector landscape is changing and the Scottish Government believes the public sector equality duty is important in its work to progress reform and improve public services, to make the shift towards prevention and to respond to difficult economic conditions.

2.8 Communities are facing difficult times and now more than ever it is important to ensure that policies for which we are responsible and practices over which we have influence are taking account of their needs and experiences. Our outcomes are designed to support improvement in both policy and practice.

2.9 We believe that equality should be an integral part of our business and that our equality outcomes should be similarly integral to our business performance. As such our Equality Outcomes are designed to align with the Government's economic strategy and our strategic objectives. They contribute to the Scottish Government's National Performance Framework and in particular to the delivery of the National Outcome: 'we have tackled the significant inequalities in Scottish society'. Links to National Outcomes are contained within each Equality Outcome.

2.10 The Scottish Government aspires to a more diverse workforce but at this time of constrained resources the opportunities to realise that ambition are limited. Nevertheless our People Strategy is designed to support the organisation through this period and ensure that employees have an environment within which they can thrive. The public sector equality duty with the equality outcomes identified will be another helpful driver.

Involving Others in the Development of Equality Outcomes

2.11 The Scottish Government supports a number of national intermediary organisations to promote equality, challenge discrimination and work closely with equality communities to improve their life chances and opportunities. We value their engagement with us and the insight they provide through our on-going dialogue and collaboration.

2.12 We met with intermediary organisations throughout the development process.

We explored with them, early on, our approach to setting the outcomes and sought their views on priorities, issues and evidence. A number provided supporting evidence ahead of hosting events with equality communities.

2.13 A programme of events hosted by different communities was organised to discuss the outcomes and the priorities communities saw over the next four years. Headline data was provided for these meetings to aid discussion.

2.15 In addition we welcome the consultation carried out by the Scottish Women's Convention with their local networks to support the process. We welcome the helpful input from the Black Leaders' network and CRER, and the consideration given by the Interfaith Scotland. We also acknowledge the national engagement and research carried out by the Equality Network. The findings have, along with the Scottish Government evidence reviews and engagement sessions, informed decisions on the development of the Outcomes.

2.16 More broadly we have drawn on the work of others such as the Scottish Parliament's Equal Opportunities Committee, the STUC Women's Committee and Independent Living Programme and from the material and discussion at the Women's Employment Summit held in September 2012.

2.17 The Scottish Government Diversity Team consulted with staff networks, Human Resources and trade unions with a particular emphasis on the priorities and issues for our role as an employer.

2.18 The Scottish Government has conducted a series of evidence reviews to inform the development of the Equality Outcomes. Individual evidence reviews have been developed to explore experiences and outcomes for each relevant protected characteristic. Each review reports on the available evidence on a range of policy areas including poverty, health, crime and transport.

Deciding on the Outcomes

2.19 The Equality Outcomes do not cover all that we do on equality neither do they indicate all that is important on equality. They are areas of activity on which we believe there should be some focus over the coming four years because:

a) they are issues raised by communities and translated into outcomes appropriate to our functions, competencies and responsibilities; or

b) they are issues of process and practice which need to be addressed for the effective implementation of duty and to improve our performance on the duty; or

c) the available evidence shows that there are key issues that need to be addressed.

2.20 A number of issues raised during the discussions have been included in the outcomes:

2.21 We realise that there are significant issues in policy areas which have not been touched by the outcomes. Work will continue in these areas as it will across the Government more widely. Our approach to embedding equality across Government is outlined in part 1 of this report.

2.22 There were a number of issues which were raised during discussions but which are not being taken forward as outcomes:

Addressing the Gaps in Data

2.23 Significant progress has been made in the collection and dissemination of equality data but there remain gaps. This is a matter of concern to equality interests and public bodies alike. We have not made equality data an outcome but this may be an area for consideration as part of the proposals for supporting the delivery of the public sector equality duty which Ministers are duty bound to publish by the end of December 2013. 2

2.24 Implementation plans will be developed with each of the relevant policy areas within the Scottish Government. Oversight of the outcome delivery will be undertaken by the Mainstreaming Equality Team.

2.25 Our Equality Outcomes will provide a real opportunity to use the principles of the improvement framework to embed our statutory duties across the organisation and to add value to our mainstreaming agenda.

2.26 Over the next period we will want to consider:

a) with equality communities how best to engage around developing and implementing the outcomes;

b) taking stock of the range of outcomes published across the public sector;

c) how we might improve and support better delivery of the public sector equality duty including the focus of the Ministerial proposals for publication in December 2013;

d) the development of a longer-term strategic approach to equality including the identification of appropriate equality indicators.

2.27 We will report on progress towards each of the Equality Outcomes before the end of April 2015.

* All figures are percentages of known staff responses for the Scottish Government Main Bargaining Unit.
** Not published to preserve confidentiality
*** Our current targets reflect the data from Census 2001. We will revise these once data from Census 2011 becomes available.
**** No target set

Violence against women is reduced

Progress is made towards the reduction in violence against women by 2017 through a strategic and co-ordinated approach by agencies and women's organisations.

Gypsies/Travellers experience less discrimination and more positive attitudes towards their culture and way of life by 2017.

Women's position in the economy and in employment is improved in the long term and reflected more comprehensively in Scottish Government economic policy and strategies by 2017.

Disabled people have improved access to justice and to advice in relation to their rights by 2017.

Within the longer term outcome that all children and young people will be able to make the most of the education opportunities available to them to reach their full potential, there will be progress by 2017 in the experience of those with protected characteristics who are currently disadvantaged or underperforming.