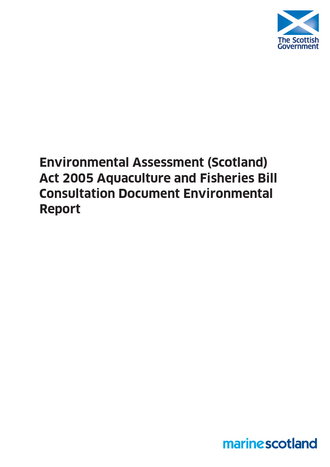 8.2 In addition to transferring live fish between farm cages and, sometimes, between farm management areas, wellboats are commonly used for transporting smolts to ongrowing sites and harvest fish to slaughter, with approximately 70% of Scottish salmon production being collected by direct harvest wellboats as of 2006 [37] . So called "dead-boats" are regularly used for the on-site slaughter and transport of harvested salmon to processing plants. All wastes from dead-boats, including wastewater, are required to be disposed of on land under the Pollution Prevention and Control ( PPC) permit. No discharges to sea should be made from these vessels.

8.3 The CoGP details a cleaning and decontamination regime for wellboats, particularly when transporting fish or moving between FMAs [38] . While regulatory controls and codes of practice [39] are in place for the management and monitoring of sea-lice and diseases in farmed stock in Scotland, the cage to cage, farm to farm and farm to processing plant transfers of fish remain a potential vector for the transmission of sea-lice and pathogens [40] , particularly where vessels collect and deliver fish from multiple sites in separate FMAs. Risks are lower for fish movements within defined FMAs established for the management of sea-lice, disease control and biosecurity, compared with fish movements between separate management areas.

8.4 While wellboats can be equipped with oxygenation systems and sensors enabling continuous monitoring of dissolved oxygen, temperature and carbon dioxide in holding bay waters [48] , it is understood that it may be common practice for wellboat operators to open the valves or "flush" the water in the holding bays to allow fresh oxygenated water in during the transport of live fish. Although the CoGP states that transport water should not be discharged en route directly into natural watercourses and that wellboats must travel with valves closed and not undertake water exchange when within 5km of any finfish farm site, no monitoring controls are in place and this remains a potential source of sea-lice and/or pathogen transmission.

8.5 Our understanding is that in-bath treatments are the most common means of sea-lice and pathogen treatment on Scottish salmon farms, but that wellboats are also used for sea-lice treatment. This method can increase the efficacy of therapeutant and reduce the quantity required, as the salmon are exposed to a bath treatment in as little as one-third of the water that would be used in cage treatments using a tarp [41] . In this process, the boat is positioned adjacent to the sea cage and the salmon are loaded from the cages into its holding bay for therapeutant application. After the treatment is finished, the treated fish are unloaded and returned to the sea cage, and the residual treatment water is discharged from the wellboat at this location.

8.6 As well as the permitted discharge of therapeutant, the discharged treatment water may also typically include dead and surviving sea-lice. Given that this discharge is local, the likelihood of transmission of lice or pathogens between farms and the wider marine environment is considered to be the same as for in-bath treatments done within the cages.

8.7 The proposed provisions include powers to Scottish Ministers to provide for controls on discharges from wellboats.

8.8 The proposed introduction of additional controls for wellboat discharges and species movements are intended to control and manage sea-lice and pathogens associated with finfish aquaculture. Wellboats have been identified as a potential pathway for the transmission of sea-lice and pathogens.

8.9 Improved control of sea-lice and pathogens has the potential for significant environmental benefit, since these can adversely affect wild salmonid populations.

8.10 As no significant negative effects from these provisions have been identified, no mitigation measures are required. Given the high-level nature of the provisions, enhancement measures have not been proposed at this stage of the Bill's development.

Effects of Continuing the Status Quo

8.11 Continuing the current situation would result in the continuing risk that sea-lice may be discharged from wellboats, which would have adverse implications for wild salmonid populations.