Under the Scotland Act, heat policy, energy efficiency and building standards are devolved, however regulation of energy markets, oil and gas, electricity and gas networks and consumer protection remain reserved to the UK Government. As such, the Scottish Government can set standards for energy efficiency, regulate technical aspects of district heating, and can introduce measures to decarbonise heat in buildings not using mains gas. It is not, however, within the Scottish Government's competence to require the decarbonisation of the heat supply of those currently using mains gas. In this area, we continue to work with the UK Government to identify and investigate the best way forward. The UK Government recently published an overview of current evidence on decarbonising heat[7]. We have also recently published our Vision for Scotland's electricity and gas networks between 2019 and 2030[8] which discusses the potential role of the gas network in providing low carbon heat in the future.

Our Climate Change Plan and Heat Policy Statement[9] outline our overarching approach to decarbonising heat, based on the hierarchy shown. (Figure 2).

The Scottish Government has been consistent in its support for energy efficiency and low carbon heat, and continues to focus its efforts where it has control of the necessary levers. As such, over the short- to medium-term we are focussing on improving the energy efficiency of all buildings, deploying appropriate low carbon heat solutions in individual buildings that do not use mains gas and developing heat networks where appropriate. 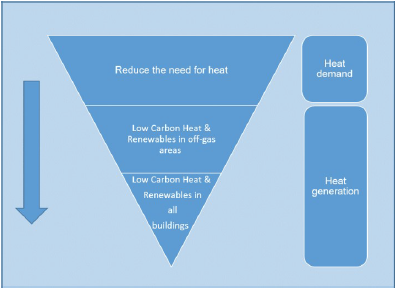 Reducing demand for heat, by making buildings and heating systems more efficient, is one of the most cost-effective ways to reduce emissions and bills, as well as to protect against future changes in energy prices. That is why we continue to invest heavily in improving the energy efficiency of Scotland's buildings and by 2021 we will have allocated over £1 billion since 2009 to improving energy efficiency and tackling fuel poverty. Last year we launched Energy Efficient Scotland[10] which, over the next 20 years, will transform our building stock so that it is warmer, greener and more efficient. Energy Efficient Scotland includes a framework of energy efficiency standards which will see all homes improved to meet EPC Band C by 2040, where technically feasible and cost effective, as well as all technically feasible and cost effective improvements applied to non-domestic buildings.

Our programmes and policies aim to create a favourable climate for investing in low carbon heat solutions. We currently make available a range of support including low cost loans and free impartial advice to householders and businesses, enabling them to switch to low carbon heat.

In recent years, we have put in place a range of support programmes, including:

The Scottish Government is committed to eradicating fuel poverty and through the Fuel Poverty (Definition, Target & Strategy) (Scotland) Bill sets a new target that in 2040 no more than 5% of households in Scotland are in fuel poverty; and places a duty on Scottish Ministers to produce a long-term fuel poverty strategy.

In 2017, 24.9% of households were estimated to be living in fuel poverty, under the current definition[11]. The fuel poverty rate is affected by levels of household income, energy prices, the energy efficiency of housing, and energy behaviours at home.

Decarbonising the heat supply to off gas buildings has the potential to affect the fuel poverty rate; attempts to address fuel poverty can also affect the drive to lower carbon emissions. When planning the implementation of heating systems that are fit for the future it is appropriate to consider all heating systems including those using high carbon fuels like oil and LPG but also those using electricity.

This call for evidence is concerned with all properties that do not use mains gas for heat, including those currently using electric heating systems. Homes using electricity for heat currently have extremely high levels of fuel poverty (52%)[13]. These homes are within the scope of this call as although they use electricity and thus are moving toward low carbon heat already, their levels of fuel poverty may mean that their existing heating system could need upgrading if fuel poverty targets are to be achieved. The decarbonisation of all heat and the achievement of fuel poverty targets will require wholesale changes in how buildings are heated across Scotland. If low carbon and fuel poverty targets are to be achieved it is appropriate to take a holistic view across the system and to plan for the affordable, low carbon system of the future. It is also appropriate to consider the network and generation infrastructure requirements of the future with planning for this inherently linked to the scale and type of electric heating.

Scotland's building stock is extremely varied in terms of building type, construction method, age and energy efficiency rating. Natural gas is used to supply the majority of heat in Scotland, but electricity and heating oil also account for significant shares. In recent years, renewable sources have met an increasing proportion of heat demand and in 2017 accounted for an estimated 5.9% - 6.1% of non-electrical heat demand. The main renewable sources currently, in terms of capacity, are biomass (including CHP), heat pumps and energy from waste.[14]

Electricity is the primary heating fuel of 12% of Scottish households.[15] Electricity in Scotland is becoming increasingly low carbon, and by 2032 electricity generation is predicted to be largely decarbonised, therefore contributing to the supply of low carbon heat.

The remainder of this section provides a breakdown of heat supply across the domestic, non-domestic and industrial sectors and looks at the current market for low carbon heat in Scotland, giving a sense of the scale of the challenge ahead.

The majority of these properties use electrical heating systems, with the remainder, using heating oil, LPG or solid fuels as their primary heat source (excluding properties connected to district heating networks). Homes using high carbon fuels like oil, LPG and coal are much more common in remote and rural areas, with properties not connected to the gas grid in urban areas predominantly using electricity for heat.[17]

We do not currently have sufficient evidence to compare the relative energy efficiency of off gas and on gas non-domestic properties. However, recent Scottish Government analysis estimated that almost three in four of all non-domestic premises have a current EPC band of E or worse with 5 percent banded B or better[24].

A minority of non-domestic buildings will be used by industrial or manufacturing businesses to house their operations, processes or production lines. Heating these premises to create adequate conditions for the internal comfort of employees is part of heating Scotland's non-domestic building stock. There will be varied requirements on internal conditions that industrial premises have due to the specific nature of processes taking place within these buildings, however we do not have specific information on this.

Industrial heat consumption for process energy will often be the main reason for energy consumption at a site. These processes often include significant quantities of heat which, if captured and used, could help the competitiveness of industrial business by providing a revenue stream.

Fuel diversification is one method of reducing emissions from industry, in particular the energy intensive industrial sector (EII), and this could include using natural gas or LNG instead of solid fuels. Options to switch could be enabled by gas grid extension. There could be opportunities for buildings and industrial users to share the benefits from extended infrastructure. Significant EII demand could be a catalyst - creating connections between industrial sites and adjacent communities and helping to embed the energy transition.

Looking ahead, hydrogen as a fuel could meet some industrial demands albeit this would depend on a degree of repurposed infrastructure. A paper on how to decarbonise Scotland's industrial sectors and sites will be published for discussion in 2019. It will cover how to incentivise a wide range of methods to decarbonise including industrial heat recovery, energy efficiency measures and innovative technologies such as carbon capture and storage.