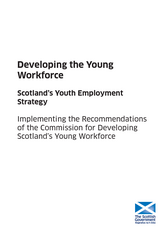 Access to Work Based Learning for All Young People

Now is the time to more actively target Modern Apprenticeships towards supporting economic growth and areas of the labour market where the long term prospects of young apprentices are greatest.
Education Working for All!

Modern Apprenticeships ( MAs) are widely recognised as being an excellent opportunity to gain skills, experience and a qualification while in employment. They support the development of our collective skills base and in doing so can contribute to economic development.

The Commission's report recognises the success and the potential of the MA programme and the Government's plans to build on this by expanding the MA offer to create more opportunities and to better align the programme with key sectors and areas of economic growth. Modern Apprenticeships are driven by employer demand and are well respected and understood.

In expanding the MA offer, the Government will also ensure that there are clear routes into apprenticeships in key and growth areas, for those in school through foundation apprenticeships and for those not in schools through early stage pre-apprenticeships. Working with partners, the Government will also look to break down some of the pre-conceptions surrounding the programme and in doing so encourage groups that are currently under-represented to participate in future. This includes challenging gender and cultural stereotypes and removing barriers where they exist for those who require additional support.

A new supervisory board, led by employers will ensure that Modern Apprenticeships continue to be closely linked to areas of economic growth and job opportunities. This will be guided by Skills Investments Plans and Regional Skills Assessments which will for the first time provide a regional level assessment that allows employers and providers to develop opportunities that will lead to sustained employment by making better informed decisions on which Modern Apprenticeships ( MAs) should be supported.

An increased focus on higher level apprenticeships, particularly in STEM subjects, will encourage alternative models and improved pathways for progression to degree-level qualifications in a work-based setting.

Young people, parents, carers, teachers and practitioners and employers are all crucial to the development of Modern Apprenticeships and success will depend on ensuring that they are central to what is offered and how it is delivered and promoted.

Enhancing the perception of Modern Apprenticeships and other vocational and work-based learning is critical to the success of this work. This will involve close engagement with those participating in the scheme, as well as the engagement of parents, teachers and practitioners and other influencers to understand better the benefits of these options to both those who participate and for their employers.

There will be a concerted effort of promotional activity to support this change which will look to ensure fair access and to encourage more employers, particularly small and medium enterprises ( SME) to participate and gain the benefits of doing so.

Developing the young workforce in Scotland requires a long term effort across many parts of the education system and among employers. In terms of Modern Apprenticeships, over the seven years of this young workforce programme, young people, their parents, teachers and practitioners, those working in colleges, training providers and employers will be able to see the following headline changes:

In year one, we will establish the demand for further expansion so that activity can be targeted in key areas. We will develop and test new approaches such as foundation and advanced apprenticeships and will look to create new initiatives to encourage more people from under-represented groups to take part.

In year two, the new Modern Apprenticeship Supervisory Board will be established to help shape progress on expansion plans. We will evaluate early activity through foundation and advanced apprenticeship pathfinder activity and consider how successful programmes can be expanded further. New quality assurance processes will be in place alongside new incentives to encourage small and medium enterprise to take on more apprentices. Parents, and young people will have a greater awareness of and understanding of the opportunities brought by participating in the different levels of Modern Apprenticeships.

In year three, equality action plans will be put in place and the number of MA opportunities will be increasing, with a greater proportion at higher levels and in STEM. Alignment with industry needs will continually improve as the use of Skills Investment Plans and Regional Skills Assessments becomes more embedded and the influence of the Supervisory Board is felt more strongly. It will be easier for young people to find Modern Apprenticeship vacancies through the relaunched My World of Work.

In year four, the number of MA opportunities will continue to increase and participation from under-represented groups will be improving. Pilot activity will continue to be evaluated - particularly around foundation apprenticeships and early stage pathways with successful activity continuing to be rolled out.

In year seven, there will be at least 30,000 new Modern Apprenticeship starts each year. The system will be tested and its impact will be established. There will be evidence of increased employer satisfaction, more young people completing vocational qualifications, more achieving at a higher level and more successful progression into and within employment.

Key themes and milestones for apprenticeships

Achieving our ambitions for the young workforce requires a focus on the following themes in relation to apprenticeships:

The milestones set out below detail what this will involve over the lifetime of the programme.

Education Working for All! Recommendations

KPI 6 - Increase the percentage of employers recruiting young people directly from education to 35 per cent by 2018.

KPI 9 - Increase the number of MA starts from minority ethnic communities to equal the population share by 2021.

KPI 10 - Increase the employment rate for young disabled people to the population average by 2021.

KPI 11 - Increase positive destinations for looked after children by 4 percentage point per annum resulting in parity by 2021.