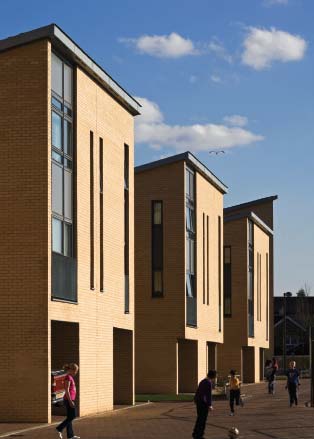 Good street design can promote a better quality of living for everyone. Sustainable patterns of behaviour can be influenced greatly by the intelligent design of streets. It is therefore essential that all parties involved in street design ensure that streets contribute as positively to their environment as is possible.

In the more recent past, vehicle movement has often dominated the design of streets, resulting in many streets being out of context with their location and overly influenced by prescriptive standards. The prime concern of Designing Streets, in contrast, is to reverse this trend and shift the focus firmly back to the creation of successful places through good street design.

A 'sense of place'

Consider the place before vehicle movement

Providing for movement along a street is vital, but it should not be considered independently of the street's other functions. The need to cater for motor vehicles is well understood by designers, but the passage of people on foot and cycle has often been neglected. Walking and cycling are important modes of travel, offering a more sustainable alternative to the car, making a positive contribution to the overall character of a place, public health, social interaction and to tackling climate change through reductions in carbon emissions.

Achieving the right balance between place and movement

Streets should no longer be designed by assuming 'place' to be automatically subservient to 'movement'.

Good street design demands that issues of place and movement are considered together. The status of a street is dependent on its relative importance within a network in terms of both these considerations, and its status should commonly determine the design approach taken. It is only by considering both functions that the right balance will be achieved, but the focus of street design should be on creating a positive sense of place that is supported by an appropriate movement pattern. Other than in the design of motorways and some other inter-urban roads, it is seldom appropriate to focus solely on either place or movement functions, even in streets carrying heavier volumes of traffic, such as high streets.

In new developments, locations with a relatively high place function would be those where people are likely to gather and interact with each other, such as outside schools, in local town and district centres or near parades of shops. Streets that pass through these areas need to reflect the importance of these places in their design, which in new developments should be identified at the masterplan/scheme design stage.

Defining the relative importance of particular streets/roads in terms of place and movement functions should inform subsequent design choices. For example:

This way of looking at streets can be expressed as a two-dimensional matrix (right) where the axes are defined in terms of place and movement. Areas where people are likely to gather and interact with each other will have a high place function.

Once the relative significance of the movement and place functions has been established, it is possible to set objectives for particular parts of a network. This will allow the local authority to select appropriate design criteria for creating new links or for changing existing ones.

Movement and place considerations are important in determining the appropriate design speeds, speed limits and urban structure, along with the level of adjacent development and traffic composition.

Street design guidance, as
set out in this document, can
be a material consideration
in determining planning
applications and appeals

Planning Permission may be refused and the refusal defended at appeal or local review solely on design grounds.

Designing Streets is national planning policy and its policies should be taken into account by local authorities when determining planning applications and producing guidance. Designing Places and Designing Streets stand together as the two key design policy statements for Scotland. 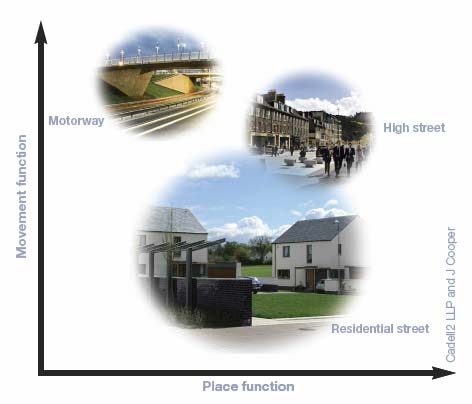