Progress and the state of the epidemic

The WHO declared the Coronavirus disease (COVID-19) a global pandemic on 11 March 2020. After taking firm action to stop the spread of the virus by implementing a nationwide lockdown, the Scottish Government published the Coronavirus (COVID-19): Framework for Decision Making in April, setting out our principles and approach for responding to the epidemic. These principles and approach have served us well and continue to guide our strategic response to the epidemic.

In May 2020, we published Coronavirus: Scotland’s Route Map Through and Out of the Crisis which set out a clear path for cautiously easing restrictions ranging from Lockdown to Phase 4 – the point at which the virus would no longer be considered a significant threat to public health. Progress through the Route Map phases was based on meeting epidemiological conditions, and decisions on which measures to ease were informed by assessments of the four harms caused by the virus, reflecting the multi-faceted nature of the crisis.

Our progress was deliberately careful and incremental, with Scotland progressing to Phase 1 on 28 May, followed by gradual progress through Phases 2 and 3 during the summer months. Due to the collective effort, resilience and sacrifices of people across Scotland, we managed to suppress the virus to a very low level during the summer of 2020.  Between 3 June and 3 August daily reported cases remained below 50. The weekly seven day incidence rate per 100,000 was below 10 from 28 May until 21 August. The number of daily hospital admissions for COVID also remained below 10 between 6 June and 24 August and there was a total of 15 ICU admissions from 1 June to 1 September. Between 25 June and 25 August only 10 deaths were recorded of people who had tested positive for the virus and for many days during this period no deaths were recorded at all. As well as suppressing the virus, we enabled 96% of the Scottish economy to re-open, albeit with various restrictions remaining in place. 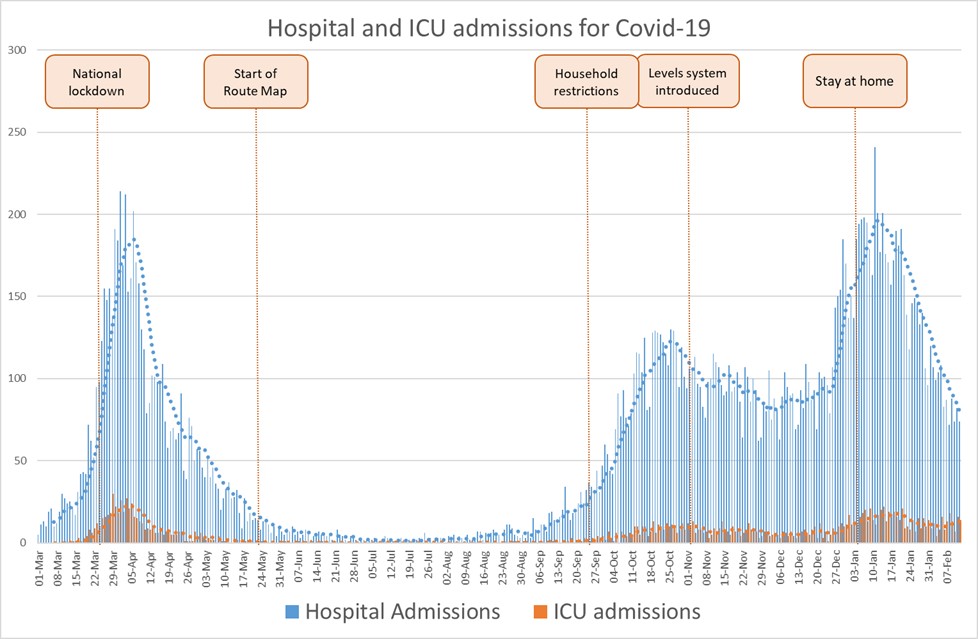 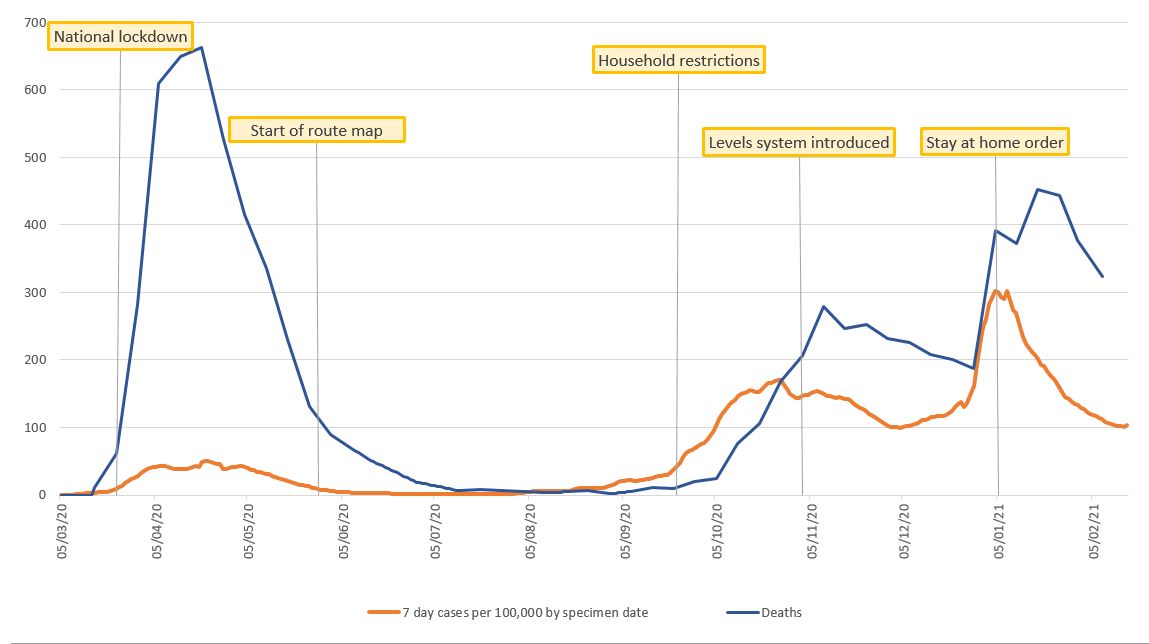 In the late summer and autumn we saw a return to schools, colleges and universities, but we also saw the virus begin to return, driven by cross-border importation of the virus despite our attempts to limit such importation. As Figure 5 below shows, not only did the virus return but genomic sequencing revealed that new variants emerged and one in particular became dominant in Scotland during the autumn. (See 20A.EU1 in Figure 5,below.)

Figure 5: Diversity of the SARS-CoV-2 sequenced in Scotland during the 1st and 2nd Waves 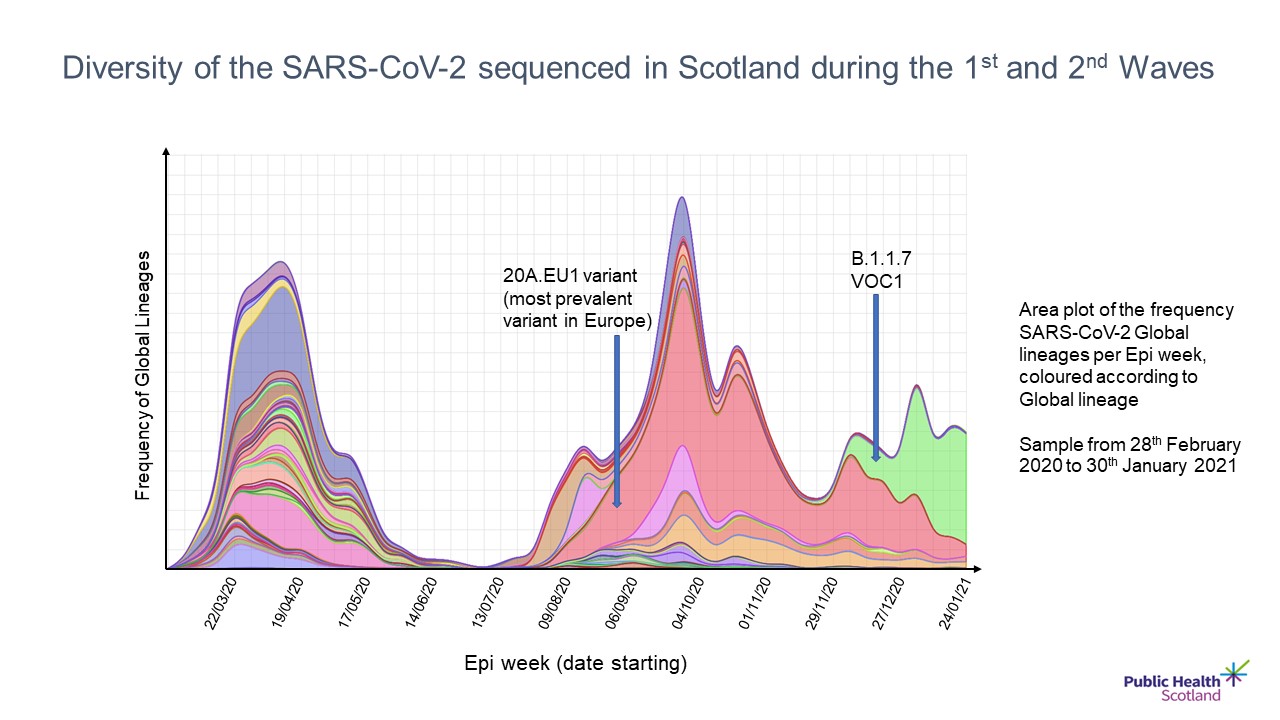 Initially we suppressed these outbreaks through Test & Protect and bespoke responses (for example, around Gretna, in Aberdeen, and later, from September, across an expanding section of the West of Scotland). However, in the wake of developments across most of Western Europe, the virus continued to spread throughout Scotland in what became the second wave that is still with us as we publish this update. In response, we moved quickly to impose ‘Reset’ restrictions across the country in October, with tougher restrictions in the Central Belt where prevalence was higher than in the other areas of Scotland.

In late October we published Coronavirus (COVID-19): Scotland’s Strategic Framework, setting out our integrated plan for addressing the rising tide of the epidemic, setting out not only our plans for a graduated and proportionate system of restrictions reflecting local prevalence (the Levels) but also our plans for vaccination, for expanded testing, maintenance of adherence to guidance and regulations and support for those affected by the crisis.

We used our experience from both easing restrictions over the spring and summer and from outbreak management in the autumn to develop a new, strategic approach to outbreak management based on five graduated levels of protection ranging from Level 0 (as close to normality as possible) to Level 4 (severe restrictions). Local areas were then allocated to these levels according to judgements about their epidemiological position. Domestic and international travel restrictions supported the approach by restricting the spread of the virus from high to low prevalence areas.

The levels were designed to support our strategic aim of suppressing the virus while restoring as much normality to people’s lives as possible. (As shown in Box 3 on p.44, the World Health Organisation subsequently published interim guidance that accorded closely with our approach in Scotland, including five levels (0-4), similar types of metrics to guide allocations of local areas to levels, and travel restrictions).

In Scotland, the introduction of the ‘Reset’ restrictions in October, which coincided with school holidays and broadly matched Levels 2 (non-Central Belt) and 3 (Central Belt), followed by the introduction of the Levels system succeeded in arresting a rapidly deteriorating trend of infections and send it back into decline. Reported case rates nationally fell by over 40% from the peak of 170 case per 100,000 on 25 October to 99 cases per 100,000 by 4 December and other epidemiological indicators such as hospitalisations and deaths also improved considerably. Importantly, in accordance with respective protection levels and epidemiological conditions, varying levels of economic and social activity were able to continue across the country, consistent with the two elements of our strategic intent.

While the overall direction was positive, the experience of areas varied across the country and, towards the end of November, a number of areas in the Central Belt were moved into the highest level of restriction (Level 4). This coincided with the period during which we now know that the new, much more transmissible and potentially more harmful variant (B.1.1.7) was taking root in Scotland (see Figure 5).

Concerningly, beginning in December, the levels – as originally designed –  became less effective in suppressing the virus, largely as a consequence of the increased transmissibility of the new variant. The protection levels were designed at a time when the variants in Scotland were much less transmissible: the new variant therefore reduced the protective effect of the levels and the situation deteriorated.

To respond to this deterioration, a strengthened Level 4 was introduced across most of Scotland (with the exception of some island communities) on Boxing Day, and strengthened further, including with a Stay at Home requirement, on 5 January 2021. These tougher restrictions have put the epidemic in Scotland back into decline, but at a severe cost to the economy and broader society, and involved the closure of schools to most children.

The new, more transmissible variant (B.1.1.7) has now become the dominant variant in Scotland. Furthermore, other new variants have been identified which pose new risks to Scotland (including around the potential for vaccine escape) and have required tighter measures to limit the importation of the virus, including new variants, from abroad. In response, we have adapted and will continue to adapt our approach for managing the epidemic, as set out in the sections: protective measures and levels system and importation measures.

One further development that was expected when we published the original Strategic Framework but has since become a positive reality is the roll-out of our vaccination programme. The rapid progress of this programme and the excellent rate of take up by people across Scotland heralds two hugely significant benefits. Firstly, it should significantly reduce mortality and morbidity from COVID. And secondly, while this is as yet uncertain, we hope it will significantly reduce transmission of the virus, which will mean that, as vaccines are rolled out further, fewer restrictions will be required to achieve the same degree of suppression of the virus assuming that adherence to remaining restrictions is maintained. These factors, while retaining a degree of uncertainty, have helped to shape our planning for the management of the epidemic over the period ahead as set out in the following sections.