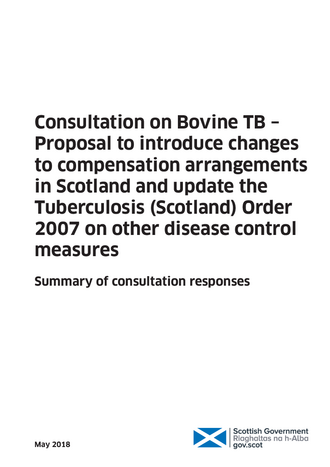 The Scottish Government recently consulted on a number of changes to the Tuberculosis (Scotland) Order 2007 ("the TB Order"); including proposals to introduce changes to the requirements for post movement testing and to the way we pay compensation where the provisions of the TB Order have been breached. We also proposed the introduction of a cap on compensation payments similar to that already in place elsewhere in the UK.

Similar TB measures already introduced by both Defra and the Welsh Government highlighted the need to review both the Scottish TB Order and compensation system to ensure they continue to incentivise compliance and best practice while still being financially sustainable in the future.

The Scottish Government is committed to a comprehensive, practical and proportionate programme of actions that will help maintain our current low levels of TB and to safeguard our Officially TB Free status. We have therefore considered whether there is scope to implement further TB control measures that will encourage farmers to follow good farming practices in order to keep disease out of their herds.

A total of 15 written responses were received to the consultation and these were sorted into the following respondent groups: