Contents
CONSULTATION ON THE ALLOCATION OF SCOTTISH FISH QUOTAS
Summary 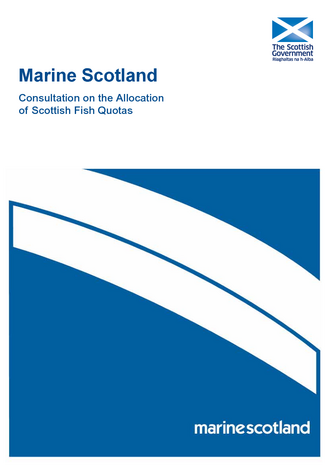 What the consultation is about

This consultation is about how the Scottish Government should allocate the fish quota that is made available to Scotland. The Government is holding a consultation now because fishermen have raised concerns about the present system of allocation.

The Government believes that quotas must be managed in the common interest, and wishes to encourage quotas to be held by those who can fish them. We want through this consultation to consider if the system needs to change to better pursue these aims and the Government's wider policy objectives.

There are essentially three options:

The consultation is about fish quota for vessels that are in the membership of a Fish Producer Organisation ( PO) and vessels of 10 metres and under (10mu) that are not.

At least while the consultation continues, there will be a moratorium on the permanent transfer of FQA units from Scottish to non-Scottish fishing licences. The moratorium has no effect on in year leasing of quota: this can continue as normal.

The Scottish Government's principal policy objective is to enable the fish catching sector and associated onshore enterprises to make an increasing contribution to Scotland's sustainable economic growth, in a way that reduces inequalities and disparities between the regions of Scotland. More specifically, the Government's aims are to:

The Government is focussed in particular in this consultation on how it might be possible to sustain the role of smaller family and local fish catching businesses in the Scottish industry.

The consultation considers the status quo, improvements to it and also new bases and systems of quota allocation, and assesses the extent to which different options might pursue the Government's objectives effectively.

The present system of quota allocation is based on the Fixed Quota Allocation ( FQA) system, which has applied in Scotland and across the UK since 1999. In 1999, allocations to licences were determined based on catches recorded between 1994-1996. The FQA system and the UK Fisheries Administrations allowed for transfers of allocation units between licences, and there have been large movements of units since 1999, including when vessels were decommissioned in the last decade.

The main argument for retaining the status quo is that the fixed nature of allocations has provided a stable and resilient system through which the fishing industry has been able to develop and adapt during fluctuating economic and biological conditions. It is also argued that the FQA system has allowed family businesses, POs and community organisations, including local authorities, to build up holdings of quota, and thus support the success of fishing businesses and communities.

Improvements to the status quo

It is possible that the Government's objectives could be pursued more effectively by making improvements to the status quo system.

The Government considers that there are changes that could be made to improve the FQA system. These include:

Options for new bases and systems of allocation

The Government also invites discussion of whether a new basis or system of quota allocation is necessary to pursue its policy objectives effectively.

By including consideration of this possibility the Government is seeking to establish what views there are in general about the need for such reform. If, after considering responses to the consultation, the Government decides that a new basis or system is necessary, there will be a further period of consultation to determine the exact methods by which quotas would be allocated in future.

There are three broad options Two involve new bases for allocation and a third is about moving to a new system. The options for new bases are:

Re-basing allocations to a more recent reference period would result in a larger proportion of Scottish vessels being allocated FQAs that more closely matched their share of recent fishing activity, thus reducing the need for them to lease in additional quota. This change could achieve one of the Government's important policy objectives, which is to see quota in the hands of active fishermen.

A rolling reference period could achieve this improvement too and also make it easier for new businesses to build up a quota allocation, which would be generated over a number of years by their own fishing activity, rather than - as is the case now - by having to acquire allocation units. New businesses would probably still have to lease in quota at first, but would then build up an allocation. A rolling reference period might therefore undermine substantially the basis for trade in quota allocations.

To avoid undermining positive features of the status quo, such as community quota schemes, it would be possible to undertake re-allocation on a selective basis, which might exclude these holdings from a re-allocation process. It would also be possible to include some quota stocks in a re-allocation exercise, but exclude others, where it might be considered that the status quo system was pursuing the Government's objectives effectively. One could, for example, deal with whitefish, Nephrops and / or pelagic stocks in different ways

There is also a third option, to move to:

Moving to a wholly new system of collective allocation and management of quota provides the opportunity to 'go back to the drawing board' and design a fresh approach to distributing quota, explicitly grounded in all five objectives of the Government outlined above. There are clear attractions in the idea of being able to develop and shape - through careful, measured and full engagement with the fishing industry - such a 'fresh start'. It would also require a strong commitment to and belief in the idea that such fundamental change will ultimately deliver broader benefits for the long term, despite the prospect of disruption in the short term.

If the Government decides to implement improvements to the present FQA system, but keep FQAs as the essential basis for allocations, it is proposed that changes could first come into effect for the 2016 quota allocation year.

If instead the Government decides to allocate quotas on a new basis or through a new system it is proposed that there be a 7 year notice period so that changes could first come into effect in 2021. Until then, the Scottish Government would continue with its present allocation policy.

Subject to agreement with the UK Fisheries Administrations, it would also be planned to lift the present moratorium on transfers of FQA units from Scottish licences when the modified or new system comes into effect, in 2016 or 2021.

Quota allocation and management for inshore (10 metres and under) fishing

The position of 10mu vessels not in membership of a PO is considered separately. This is because fishing by these vessels has been subject since 1999 to a different regime, which does not involve individual allocations or FQAs. Catches of quota stocks taken by these vessels are managed in general through a combination of national quota pools and periodic catch limits enforced through vessel licences.

The consultation considers whether improvements can be made to the system of 10mu quota management. In particular, consideration is given to the option of developing more local quota pools, which might also involve a more prominent management role for Inshore Fisheries Groups ( IFGs). The extent to which the 10mu group could be integrated more closely with POs is also considered.

It is envisaged that IFGs and the Inshore Fisheries Management and Conservation ( IFMAC) group will be involved in the development of any change proposals for 10mu quota allocation and management.

Responses to the consultation

This document includes a number of specific consultation questions in relation to which the Government seeks views. Annex A describes the Scottish Government Consultation Process. Annex B is the Consultation Response Form.

We are inviting responses to the consultation by 17 October 2014. Please send your response to: