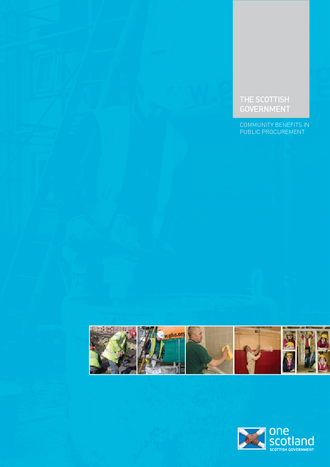 3 the Current Legal Situation of Community Benefits in Procurement

Much of the legislation governing procurement in the Scotland derives from European Community law, which is based on EC Treaty principles of:

These principles are intended to remove barriers to trade between the member States and create a free internal market within the EU by facilitating contractors from all over the EU to bid for the same public contracts. These aims are balanced increasingly with other objectives including the protection of the environment, combating social exclusion and deprivation, and consumer protection.

As stated in the OGC Note, Social Issues in Purchasing: "the new Directive makes explicit the scope to take social and environmental issues into account at the relevant phases of the procurement process". The Consolidated Directive says much more on the subject of social and environmental considerations than its preceding directives, both in its non-binding but influential recitals and its articles which are now implemented in the Public Contracts (Scotland) Regulations 2006.

Recital 1 of the Consolidated Directive states: " This Directive is based on Court of Justice case-law, in particular case-law on award criteria, which clarifies the possibilities for the contracting authorities to meet the needs of the public concerned, including in the environmental and/or social area, provided that such criteria are linked to the subject-matter of the contract, donot confer an unrestricted freedom of choice on the contracting authority, are expressly mentioned and comply with [Treaty Obligations]". Case law relating to use of Social Clauses is contained in Appendix 6.

There are recitals which support other environmental and social issues, such as sheltered workshops, environmental requirements and the involvement of small and medium-sized undertakings in the public contracts procurement market. These areas are addressed in separate policy guidance. Specifically in the context of this report, Recital 33 states:

"Contract performance conditions are compatible with this Directive provided that they are not directly or indirectly discriminatory and are indicated in the contract notice or in the contract documents. They may, in particular, be intended to favour on-site vocational training, the employment of people experiencing particular difficulty in achieving integration, the fight against unemployment or the protection of the environment. For instance, mention may be made, amongst other things, of the requirements - applicable during performance of the contract - to recruit long-term job-seekers or to implement training measures for the unemployed or young persons, to comply in substance with the provisions of the basic International Labour Organisation ( ILO) Conventions, assuming that such provisions have not been implemented innational law, and to recruit more handicapped persons than are required under national legislation."

In Recital 46 there is the following acknowledgement:

Article 26 of the Consolidated Directive has this express provision:

This is translated in the Public Contracts (Scotland) Regulations 2006 by regulation 39 which states:

This section implements the European framework and Purchasers should refer to the the guidance available, such as the Scottish Procurement Directorate's "Social Issues in Public Procurement", in applying it to their own procurement practices.

The extent to which public bodies and contracting authorities can include social requirements into their contracts depends on:

Contracting authorities such as local authorities and Non Departmental Public Bodies ( NDPBs) have their powers for the most part set out in statute. In considering whether a contracting authority is able to promote social policy initiatives through public procurement, the following issues have to be addressed:

Local authorities are subject to a statutory framework that is worth considering in a little more detail given their purchasing strengths.

Local authorities may use only those powers conferred upon them by statute, and may use those powers only for the purposes contemplated by the statute.

Under Part 3 of the Local Government in Scotland Act 2003 a local authority has an express power to do anything that it considers likely to achieve the well-being of the whole or any part of its area and/or all or some of the persons within that area.

The terms and conditions of employment by contractors of their workers or the … arrangements for the …training… of or other opportunities afforded to their workforces.
LGA 1988 S.17(5)(a)

However, section 7 of the Local Government in Scotland Act 2003 sets aside the above constraint in the following circumstances:

It is therefore suggested that a council is free to include matters related to the recruitment and training of the contractor's workforce where these workforce matters are a contract condition and do not hinder the authority from achieving 'best value'. In addition such provisions must be consistent with national and EU procurement law, in particular the EC principle of equal treatment.

Under Part I of the Local Government in Scotland Act 2003 a council has a duty to make arrangements which secure best value, defined as "continuous improvement in the performance of the authority's functions". This includes a requirement for councils to " maintain an appropriate balance among:

(a) the quality of its performance of its functions;
(b) the cost to the authority of that performance;
(c) the cost to persons of any service provided by it for them on a wholly or partly rechargeable basis." (section1(3) Local Government in Scotland Act 2003).

Furthermore, "in maintaining that balance, the local authority shall have regard to -

(a) efficiency;
(b) effectiveness;
(c) economy; and
(d) the need to meet the equal opportunity requirements" (section 1(4) Local Government in Scotland Act 2003).

Under section 1(5) of the Local Government in Scotland Act 2003 a council must discharge its best value duties "in a way which contributes to the achievement of sustainable development". This requirement is developed in statutory guidance provided by the Best Value Taskforce which states that a local authority which secures Best Value will be able to demonstrate contribution to the achievement of sustainable development, i.e. consideration of the social, economic and environmental impacts of activities and decisions both in the shorter and longer term.

Finally, section 1(6) provides that "in measuring the improvement of the performance of a local authority's functions for the purposes of this section, regard shall be had to the extent to which the outcomes of that performance have improved".

Scottish local authorities have therefore a strong statutory mandate to pursue targeted recruitment and training requirements in a way which meets its sustainable development responsibilities, including the pursuit of equal opportunities subject to compliance with EU treaty principles.

3.3.2 Government Departments and Other Public Bodies

The scope for other public bodies to promote environmental and social requirements will depend on their particular frameworks, statutory powers and the basis on which funding is provided. This is very straightforward for organisations engaged in regeneration such as housing action trusts and regional development agencies. However, it will require specific attention for each organisation involved. Many public bodies have broadly framed ancillary or subsidiary powers to their main functions. It is the policies they adopt which will therefore be of critical importance in setting the scope for procuring sustainability in its widest context.

Contract Authorities should seek legal advice to ensure that the community benefit clauses they wish to use are within the parameters of their competence and comply with EC Treaty principles.