Outcome 7: Our international networks are adaptable to climate change 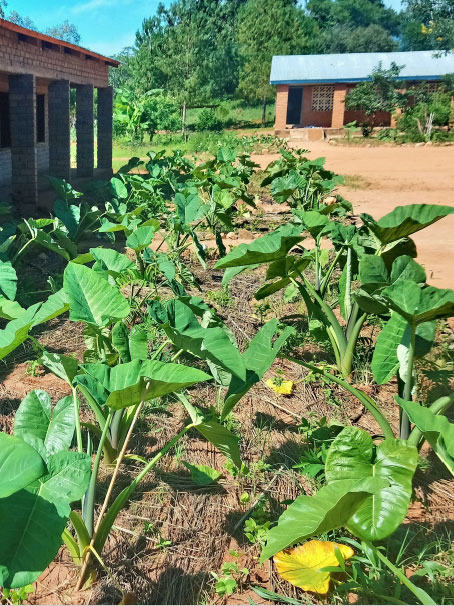 Scotland’s international networks are the interactions between Scotland and the rest of the world, and include food supply networks, international trade, governance, knowledge exchange, and development. 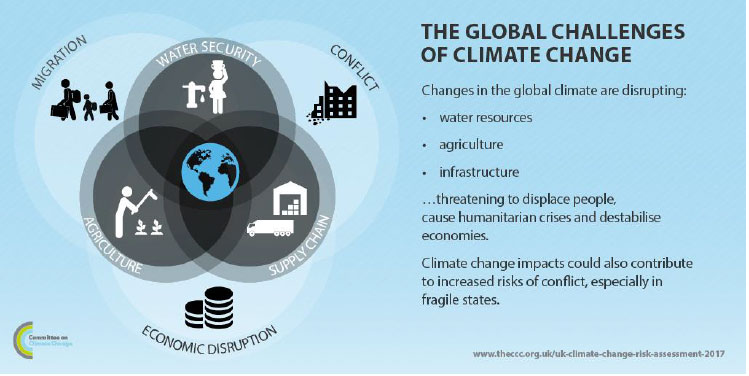 Image 7.2. The Global Challenges of Climate Change (© The CCC)

There are two strands to Scotland’s International Framework:

In addition, we place great importance on Scotland being a good global citizen. This means playing our part in tackling global challenges including poverty, injustice and inequality.

The International Development Fund (IDF) is at the forefront of our efforts, with annual funding of £10 million. The main aim is to support and empower our partner countries: Malawi, Rwanda, Zambia, and Pakistan. We have three funding streams under the IDF: development assistance (aid) projects; capacity strengthening initiatives; and commercial investment initiatives. Specifically relating to climate change, we currently provide additional annual funding to the Climate Justice Fund.

Scotland supports the Paris Agreement, which puts a strong emphasis on adaptation and resilience. Adaptation requires international cooperation and those who experience the greatest impact may need support to adapt. Climate change will impact how Scotland interacts and engages with the international community, and Scottish Ministers continue to actively participate in international climate change conferences, including championing climate justice.  In line with the aims of the Scottish Government's International Framework, we will share our experiences, values and expertise in areas such as justice, education, and climate change with a view to seeing the human rights of people across the world fully realised. Exchange of learning and knowledge will support countries to adapt, with positive indirect benefits for international governance and global political stability. We also want to learn from our international partners, ensuring that Scotland has the best possible evidence informing our adaptation action.

Scotland’s economic networks will also need to adapt. Trade patterns may change as the production of goods shifts with changing climate. Global transport infrastructure may be disrupted as sea levels rise and the risk of storms increases. There may also be opportunities for Scottish businesses to sell adaptation products and expertise internationally and make use of new trade routes to sell their goods.

Scotland’s international food networks will also need to adapt. The resilience of Scotland’s food system will depend on effective management of natural resources both here and overseas and on understanding and managing the response of international markets to climate risks. Food safety may also be affected as the risk of contamination increases in extreme weather events, such as flooding.

Where We Are Now

The following diagram outlines the structure of the International Chapter. The policies for this Outcome are set out under three Sub-Outcomes. The first focuses on climate change adaptation and imported food quality and safety, the second on Scotland’s role in international adaptation governance and the third focuses on the adaptive capacity of Scotland’s international trade. 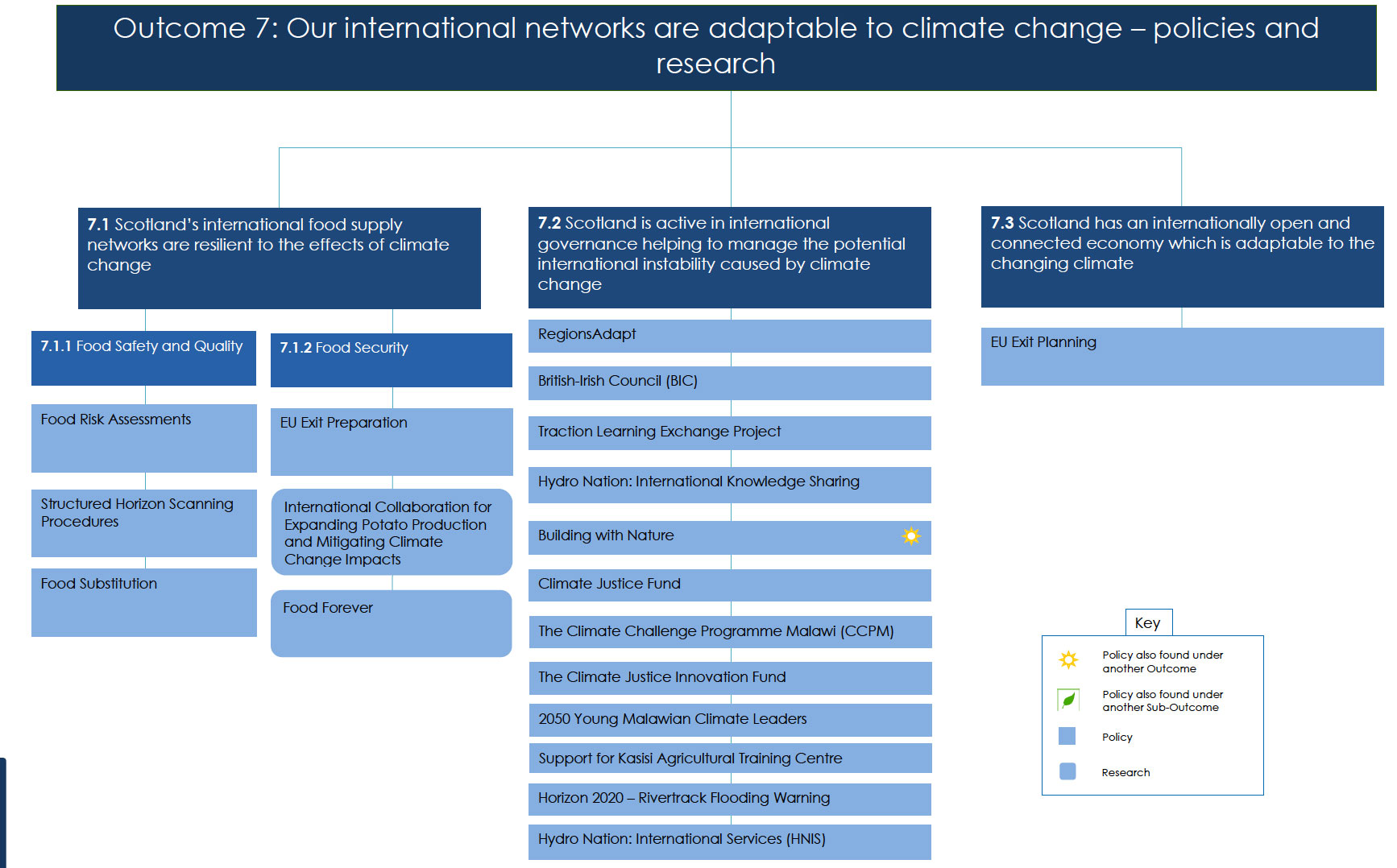 As Scotland’s climate changes, its international food supply networks may change. This includes disruption of transport routes and infrastructure as a result of increases in extreme weather and sea level rise. Trade patterns and international food production may be affected as extreme weather and water scarcity reduce the quantity and type of crops grown in different countries.

Scotland may also face new challenges associated with food safety and quality. Climate change could impact on imported food quality and safety in a variety of ways. Increased risk of flooding could increase the risk of environmental contamination. There may be additional risks from increased pesticide use in response to new pests and diseases; and transmission of diseases and toxicity through food. There may also be an increased risk of substitution of food in the supply chain if supplies are limited as a result of extreme weather.

Food Standards Scotland (FSS) is the public sector food body for Scotland and is responsible for the implementation and monitoring of food safety legislation. The Chemicals Regulation Division, part of the UK Government’s Healthy and Safety Executive, is responsible for ensuring the safe use of pesticides to protect the health of people and the environment. This includes monitoring levels of pesticide residue in both domestically produced and imported food.

As the climate changes, trade patterns and international food production may be affected. In some parts of the world, increasing heat, water scarcity and extreme weather may reduce the quantity and type of crops grown, as well as the productivity of the workforce. This may result in food price volatility or a reduction in the range of foods available. Scotland’s domestic food production may benefit from climate change due to warmer temperatures and longer growing seasons. Taking advantage of this may increase the resilience of Scotland’s food supply.

The link between drought tolerance in potato and virus pathogen spread in plants has been elucidated, allowing strategies for improved drought tolerance and reduced viral spread to be developed. The work is being extended via co-funding from the Global Challenge Research Fund (UKRI GCRF). In collaboration with partners in Kenya and Malawi, potato types carrying traits for heat tolerance, rapid maturity and virus resistance are being trialled, underpinning efforts to expand potato production in hot environments and mitigate potential impacts of climate change. All of these link to maintaining yield, reducing inputs, and increasing food security for climate change mitigation.

The diversity present in our crops and livestock, and the wild plants and animals that are their relatives, is key to addressing current and future food and climate related challenges. In Scotland, scientists in the SEFARI collective are working on a range of economically important species to understand their potential for adaptation and make better use of available genetic resources. To raise awareness and support this effort nationally and internationally, the Food Forever exhibition, developed in Scotland, will tour globally over the next five years.

The Scottish Government wants to be an active partner in international governance helping to influence the world around us on the issues that matter most. We want to be a good global citizen, making a distinctive contribution to addressing global challenges, sharing our knowledge, skills and technical expertise for global good. Scotland supports the Paris Agreement, which puts a strong emphasis on adaptation and resilience. All countries are expected to undertake adaptation planning and action, and communicate those actions to the global community. We continue to work with our international partners to champion a climate justice approach overseas. The policies below will set out how we will communicate and share our knowledge of climate change adaptation with the global community. 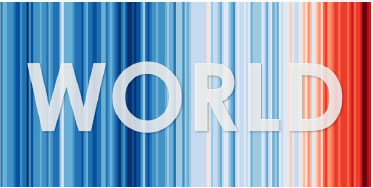 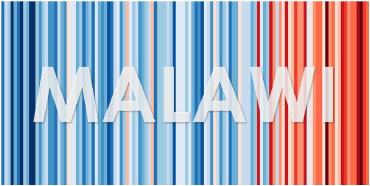 The Scottish Government’s Climate Justice Innovation Fund (CJIF) is one strand of the climate justice work that the Scottish Government carries out in Malawi. The Programme is designed to support small, innovative projects to test new strategies for approaching climate change issues.

One of these projects in Northern Malawi helps schools on the elevated Livingstonia plateau to grow their own food for the school feeding programme. Increases in rainfall and unpredictable weather patterns, partially resulting from climate change, have made access to these schools from nearby towns difficult, with access roads often damaged or washed away entirely. By growing food at the schools themselves, it’s possible for participants to adapt to this problem, whilst also providing the opportunity for schoolchildren to learn about agricultural techniques and the local ecology and climate.

Schools reported that by the second year of the project, they were able to feed the children entirely from food grown in school gardens and fields, and that teachers and parents worked co-operatively to maintain them. In addition to crops, schools are also growing tree seedlings to use in reforestation. This will increase local resilience against increased rainfall, as root systems can prevent soil from being washed away, which could otherwise lead to mudslides and flooding in valleys. 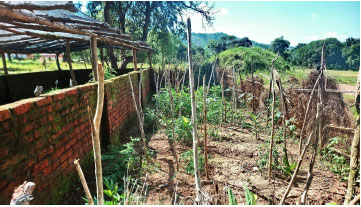 Sub-Outcome 7.3: Scotland has an internationally open and connected economy which is adaptable to the changing climate.

Climate change will impact on Scotland’s ability to import and export goods and services. Food and drink exports, including beverages (particularly whisky), fish, crustaceans and molluscs are significant for Scotland’s economy and are often important livelihoods for people living in rural and coastal communities. Maintaining our international connections, despite the disruption to trade that climate change may cause, will be vital to ensure Scotland’s economy remains open and connected.

Adapting to climate change requires action from across all areas of society. The choices and decision we all make in Scotland have impacts on other parts of the world. Consumers may want to consider shopping more locally which may reduce the pressure on long distance supply chains. Businesses may want to consider new markets and supply chain routes that are opened up as the climate changes.

1. Shop locally and seasonally. Increasing the amount of food that is grown and purchased locally and in season can help to increase the resilience of food supply networks, by making them shorter and less vulnerable to severe weather.

Monitoring and Evaluation is integral to the outcomes-based approach which encourages consideration at all stages of adaptation policy development. Further information including a general introduction to the framework, and a description of the foundation and principles can be found in the monitoring and evaluation introduction and Annex 3 respectively.

Key sources of existing monitoring evidence for Outcome 7 include: Food Standards Scotland, Health Protection Scotland, and Export Statistics Scotland. There is currently limited data available for some themes, but by identifying what we need to measure not just what we know we can, the framework highlights monitoring gaps which will be filled as more data and associated monitoring arrangements are developed.

Monitoring the Adaptation Process (‘What are we doing?’) The themes set out the structure to monitor the implementation of and output from adaptation policies and actions which support the Outcome. Indicators will include metrics of, for example: extent of monitoring of food borne disease, the reach of public awareness campaigns, and funding for climate change adaptation related projects in developing countries.

Monitoring the Sub-Outcomes (‘Is it working?’) The Sub-Outcome monitoring themes highlight the key components of each Sub-Outcome and provide the structure for evaluating progress. Indicators will include metrics of, for example: food borne disease, public awareness levels, and export statistics for climate vulnerable products.

Monitoring the outcome Monitoring at this high level will directly link the Outcome to wider government policy and the National Performance Framework by utilising relevant indicators already associated with these high-level monitoring frameworks. 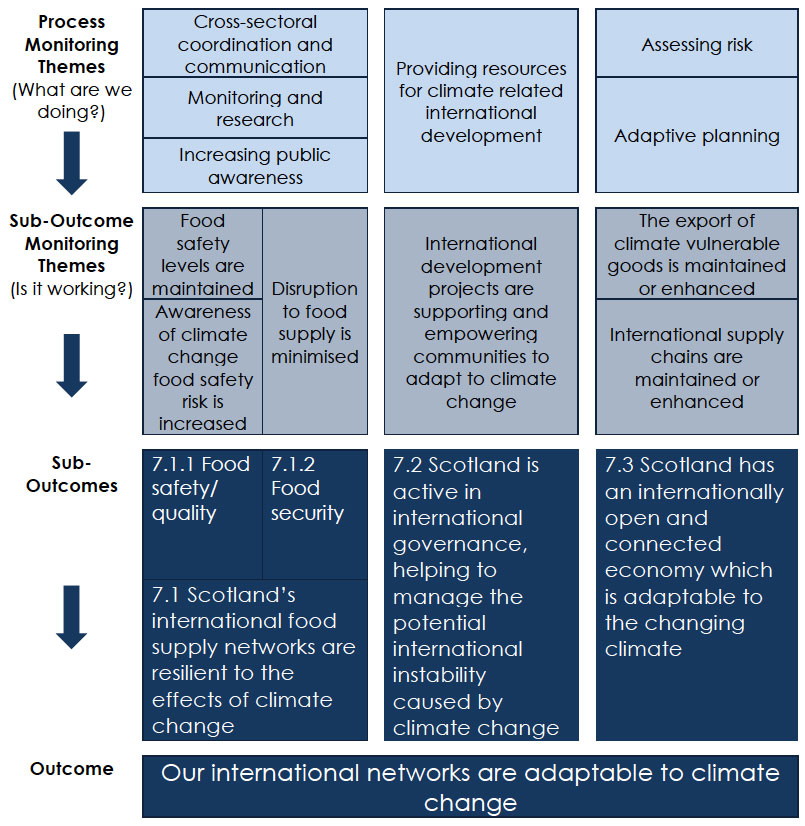 The UK Climate Change Risk Assessment risks that will be addressed by the policies presented in Outcome 7 are set out below:

Annex 1: Progress to Date
Outcome 6: Our coastal and marine environment is valued, enjoyed, protected and enhanced and has increased resilience to climate change