Statutory Requirements for the New Programme

Under the 2009 Act, the Programme must set out progress on the previous Programme, Scottish Ministers' objectives on adaptation, proposals and policies and their timescales, and arrangements for wider engagement.

The new Programme must address the risks for Scotland set out in the UK Climate Change Risk Assessment 2017 and its Evidence Report Summary for Scotland which identified six priority risk areas where action is needed in the next five years (Annex B).

The second Independent Assessment commissioned by Scottish Ministers from the Adaptation Committee will be a key component in the development of the second Adaptation Programme.

In line with the climate emergency, Scottish Ministers want the second statutory Adaptation Programme to deliver a step change in collaboration, and emphasise the wider co-benefits of climate action. We want to secure the benefits of a climate-ready and resilient nation for current and future generations.

Focusing on results, performance and measurement, we propose to build on the previous sector and risk-based approaches. We propose an outcomes-based approach, derived from both the UN Sustainable Development Goals and Scotland's National Performance Framework. For the first time, Scotland's Adaptation Programme will explore adaptation behaviour change – how individuals, communities and businesses make the most important choices in respect of our changing climate.

Our overarching vision is that we live in a Scotland where our built and natural places, supporting infrastructure, economy and society are climate ready, adaptable and resilient to climate change. We have developed a set of seven high level "outcomes" for the Programme, as set out in Diagrams A and B as follows: Diagram B: The new Adaptation Programme's Vision and Outcomes 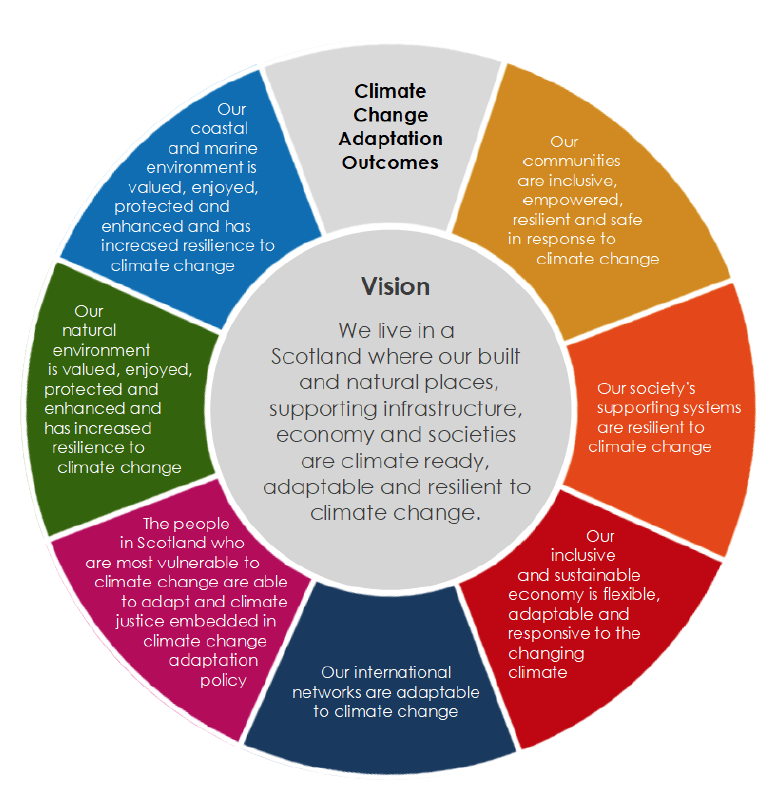 In developing the new Programme through engagement with stakeholders and the public during 2018 and 2019, the Scottish Government has completed:

The Scottish Government consult because we want better policy – and better outcomes as a result.

The Scottish Government received 73 consultation responses from 58 organisations, including a primary school, and 15 individuals.

Respondents said they want to see the vision for the Programme convey a strong sense of urgency and ambition, in line with the global climate emergency, and link to urgent mitigation action.

The responses strongly supported proposed key features of the new Programme - linking to the UN Sustainable Development Goals and Scotland's National Performance Framework; an outcome-based approach; the establishment of a National Forum for adaptation; the inclusion of behaviour change; the integration of monitoring and evaluation from the outset; and the content of the Strategic Environmental Assessment Report.

Responses had many constructive suggestions on making the Programme as cross-cutting and effective as possible. Views on the seven high-level outcomes and the list of supporting policies were generally supportive with many suggestions for additional policies reflecting specific sectoral interests. We have published non-confidential responses to the consultation and an analysis of the consultation responses.