Number of children on register is 3% lower than last year

Causes for concern relating to emotional abuse are the most prevalent

2016-17 was the fifth year that child protection data has been collected entirely at individual level. As the series has lengthened, more in-depth validation of the data has been possible, which gives a high level of confidence in its accuracy. Some of the 2016 figures in this publication have been revised as part of the 2017 validation process.

Children on the child protection register

(1) Full annual data by gender and age group from 2000 is available in main table 2.1 of the associated downloadable publication spreadsheet tables.
(2) Source: National Records of Scotland, 2016 mid-year population estimates.
(3) The All children rate shown in this table includes unborn children and a small number of young people over 16.

Chart 4: Concerns identified at the case conferences of children who were on the child protection register, 2017

Since 2012, multiple concerns can be recorded at each case conference (rather than just the main category of abuse). This means that the total number of concerns is larger than the total number of registrations, and that figures on concerns identified from 2012 onwards are not comparable to previous data on category of abuse/risk. For the 2,631 children on the child protection register at 31 July 2017, there were 6,410 concerns at the case conferences at which they were registered - an average of 2.4 concerns per conference. Chart 4 shows the most common concerns identified were emotional abuse (38% of case conferences recorded this concern), parental substance misuse (38%), and domestic abuse (37%), similar to last year's figures. Data is shown in full in AT4.3.

Child sexual abuse concerns recorded at case conferences rose 17% since 2016 but are still lower than in any year 2012-2015. There was also a rise in recording from 12 to 52 concerns in the new category of Child Sexual Exploitation, representing the first full year of data in this category. This is matched by a decrease in recording of Child Exploitation. The numbers for Child Trafficking were lower, and are grouped with Other Concerns in the publication.

The number of registrations to the child protection register increased between 2010 and 2014, but has been steady since. The proportion returning to the register after previously being deregistered is at 17% this year, and has consistently remained between 15 and 17% in recent years. Table 2.2 shows that the length of time between these periods of registration has decreased this year, with an increase in children being re-registered after a gap of less than 6 months.

Table 2.2: Number of registrations following an initial, pre-birth or transfer-in case conference by length of time since previous deregistration 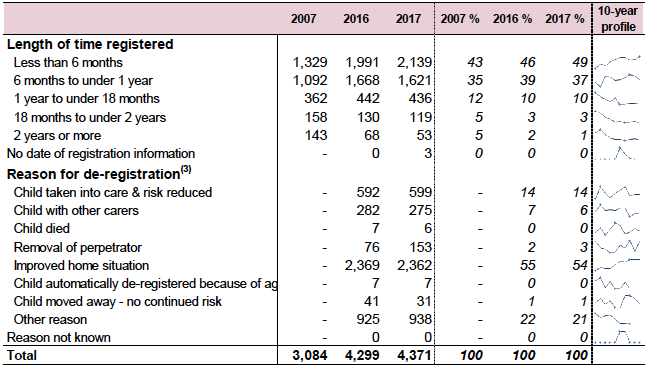 Chart 5: Percentage of deregistrations by length of time on the child protection register, 2007-2017 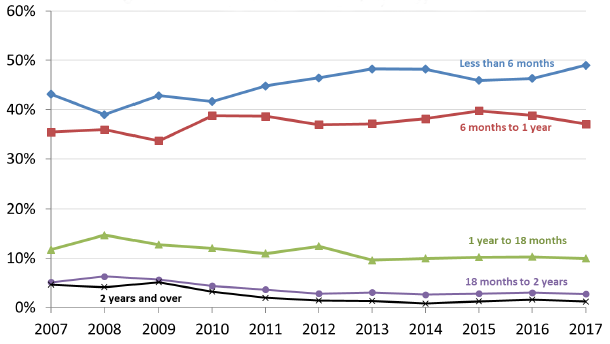 Similarly to registrations, the number of deregistrations from the child protection register increased between 2010 and 2015, but has decreased slightly in 2016 and 2017. There is a decrease in the percentage of children spending 6 months to under 1 year on the register, while the percentage of children spending under 6 months on the register has slightly increased. (Chart 5).

As is often the case, there is a lot of variability from year to year in the numbers of children on the child protection register at a local authority level due to the small numbers of children involved in each local authority. In many cases, there are no obvious reasons for changes, although in some areas, sibling groups entering and leaving the system has led to fluctuating numbers.

(1) Calculated using National Records of Scotland 2016 mid-year population estimates.
(2) The rate shown in this table includes unborn children who are on the register.

Child protection systems across the United Kingdom vary but are generally comparable. Scotland's collection year runs from 1 August to 31 July, so end‑year figures are typically reported at 31 July in this publication, while the collection year in England, Wales and Northern Ireland runs from 1 April to 31 March (so end-year figures are at 31 March). However, in Chart 6 we report the Scotland figures at the 31st March to allow comparison with the other countries.

(1) 2017 comparative data for Wales is not comparable to previous Welsh data due to a change in Welsh child protection data reporting and collection. This rate is based on experimental statistics. Details of the change are at http://gov.wales/docs/statistics/2017/171031-children-receiving-care-support-2016-17-en.pdf

Scotland has seen an increase in the proportion of children on the child protection register over the last decade, but this proportion remains notably low compared to the rest of the UK as Scotland did not have large increases in children on the register in 2007-2011 as seen in the rest of the UK. Northern Ireland has been the outlier in terms of its fluctuating trends over recent years. The decrease in the Welsh rate this year is likely due to a change in Welsh data collection procedures and does not reflect a change actual numbers.

There are links to the cross-UK data underlying Chart 6 in Background Note 1.8 and more information on the comparability of child protection data across the UK here: http://www.gov.scot/Topics/Statistics/Browse/Children/socialservicestats

Additional tables on child protection are available at: http://www.gov.scot/Topics/Statistics/Browse/Children/PubChildrenSocialWork