Annex C: Children’s Social Work Statistics 2016-17: Revision of data on time from registration for all deregistrations

An issue was identified with the statistics on length of time on the child protection register for the deregistrations reported for years 2013 to 2017[2]. The revised figures are reported in table 2.3 and chart 5 in this publication.

To produce the corrected data, review case conferences were eliminated from the analysis. Where a deregistration conference was present on a child's record, the time since the most recent registration event was calculated.

The issue affects the years between 2013 and 2017. Figures for years prior to this were based on summary figures reported by local authorities.

Chart A1: Comparison of Percentage of Children on the child protection register for 2 years or more

Chart A2: Comparison of Percentage of Children on the child protection register for 2 years or more

The response to the issue identified with the processing of this data followed the Scottish Government revisions and corrections policy. https://www.gov.srevisionscot/Resource/0045/00457524.pdf

The material was corrected on the website, and a note included alongside the publication to make it clear that this was done.

Users were notified of the correction through the Scotstat mailing list and the Local Authority Social work (LASWS) children and families group.

The processes used to produce the statistics were reviewed and instructions and code rewritten to incorporate a revised method for calculating the time from registration. In future, local authorities will be invited to check summary tables as part of the quality assurance process.

Table A1: Impact of correction on Table 2.3 (Number of de-registrations from the child protection register by length of time on register) 2013-2017 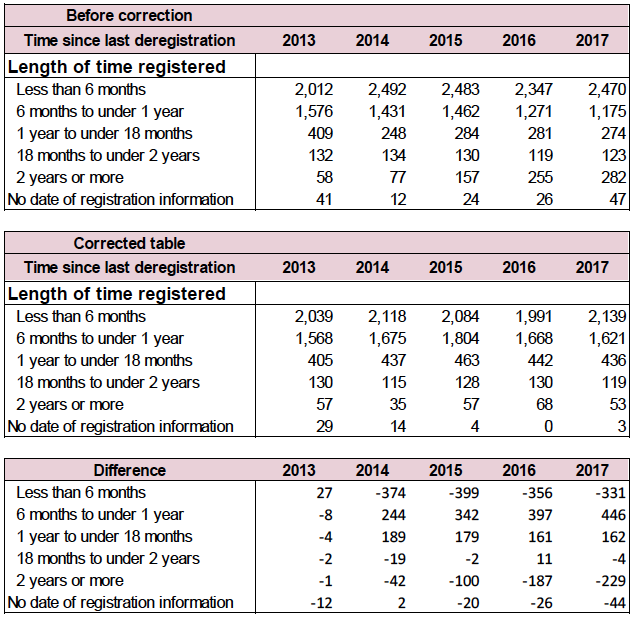