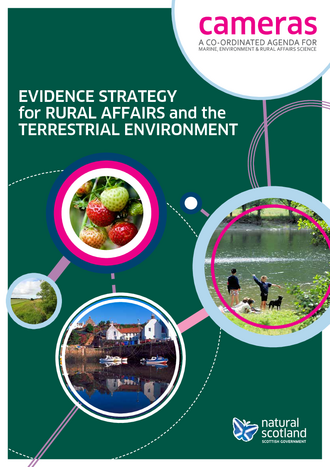 Annex A provides more detail of the areas of evidence need relevant to multiple partners under the five themes (Tables 1-5). The links to the four outcomes this strategy is seeking to support are identified in the left-hand column. The most important direct and indirect drivers of evidence needs are shown for each theme above the tables.

Major evidence users and providers are shown for each area of evidence need. Those shown in Annex A are restricted to CAMERAS partner organisations and other Scottish Government-supported initiatives and organisations. Additional evidence providers and users are expected to be identified and involved during development of evidence plans.

While implementation of this strategy will not involve every area of evidence need identified in the tables, CAMERAS partners can use the information collated here to inform their future science plans and to identify other partners interested in the same areas of work who may be potential collaborators or users of science outputs.

Annex A - Tables of Evidence Needs
Review and Indicators of Success