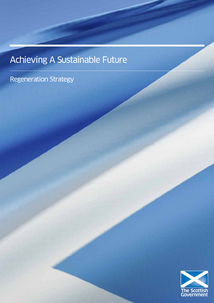 "There is a role for future national policy direction on regeneration to draw together the various strategies, frameworks, statements, guidance, and rationalise these into an overall framework" Discussion Paper Response

10. Respondents to Building a Sustainable Future indicated that it can be difficult to determine where regeneration policy 'fits' strategically within other Scottish Government strategies and policies. Other Government policies make a key contribution to regeneration as outlined below. The Regeneration Strategy does not seek to duplicate the content of these strategies and policies but to maximise their collective impact.

11. The list below is not exhaustive. It presents a snapshot of the priority areas where there is a close interaction with regeneration policy.

12. The Government Economic Strategy ( GES) reaffirms the Scottish Government's commitment to the overarching purpose: to focus government and public services on creating a more successful country, with opportunities for all of Scotland to flourish, through increasing sustainable economic growth.

13. Regeneration has an important contribution to make to the delivery of the Purpose. In particular, it supports the Purpose targets of cohesion (to reduce the disparity between the regions of Scotland) and solidarity (to reduce income inequalities), by tackling area inequality, addressing market failure, and increasing opportunities for areas of need to attract investment and jobs and to enhance the well-being of communities.

14. Regeneration will also contribute to the drivers of growth: Productivity, Competitiveness and Resource Efficiency; Participation in the Labour Market and Population Growth, by helping to realise the potential of our most disadvantaged communities.

15. The Government Economic Strategy focuses the action of government and the entire public sector on six Strategic Priorities. This includes a focus on Infrastructure Development and Place in order to drive sustainable economic growth and develop a more resilient and adaptable economy.

16. As set out in the Government Economic Strategy our approach to place is built upon a strategy that recognises the unique contribution - based on their own distinct characteristics and strengths - that every part of Scotland can make. This will ensure that all of Scotland can maximise its potential and that we can reduce disparities in economic performance.

17. Capital investment, including investment in infrastructure, transport and housing is important in driving forward development, delivering opportunities for sustainable economic growth, job creation, and connectivity. The Scottish Government is committed to ensuring that all of Scotland's communities, including our most disadvantaged areas, benefit from a range of investment opportunities as set out within the Government Economic Strategy, the Scottish Government's Infrastructure Investment Plan and the National Planning Framework. These strategies have a key role in supporting regeneration outcomes.

19. Scotland's towns and cities are the backbone of Scotland's economy. In particular, our cities play a vital role in driving forward economic growth. The more successful our cities and their city-regions are, the more successful Scotland will become. The Scottish Government's Cities Strategy (published in December 2011) sets out how we work with our cities and city regions to support more effective collaboration and optimise their contribution to Scotland. The challenges facing our most disadvantaged areas, particularly in relation to physical and economic issues, are often more concentrated in urban areas, particularly in cities. Regeneration must be tackled alongside wider economic development activity in order to secure the success of our cities and to ensure that Scotland's most disadvantaged areas are supported so that, in turn, they contribute to and benefit from economic growth.

20. Ensuring that people and places are well connected both physically and digitally can play an important role in delivering regeneration outcomes and sustainable communities.

21. The Strategic Transport Projects Review sets out recommendations based on a robust evidence-based assessment of our strategic road and rail networks over the next twenty years. Four recommendations were prioritised following its publication in 2008, including the Forth Replacement Crossing, Edinburgh to Glasgow Rail improvements, improvements to the Highland Main Line and to the railway between Aberdeen and Inverness. These and the remaining recommendations seek to ensure the strategic network fulfils the following functions:

22. As set out in Scotland's Digital Future: A Strategy for Scotland , we want to see all of Scotland, including our most rural and remote communities, equipped to take advantage of the digital revolution. Improving connectivity across Scotland will support future innovation in the digital economy and ensure Scotland's business base can remain competitive in the global digital environment. It will also play a critical role in driving rural economic growth and competitiveness, creating more and better jobs and opening up new opportunities for a different way of living and working that encourages strong and growing rural towns and villages and respects and protects our environment.

23. Encouraging greater digital participation and use of the internet in both rural and urban areas has the capacity not only to open up new economic opportunities but to achieve richer, more rewarding lives, from the greater consumer choice and keener pricing that can be obtained for purchasing, to the ability to make and maintain social connections.

24. Although concentrations of deprivation tend to be located in urban areas, the Scottish Government recognises that the problems facing some of our most vulnerable rural communities can also be significant. It is recognised that living in rural areas can present its own particular problems. These include remoteness, high fuel costs and access to public and private services. In 2011, the Scottish Government produced a paper entitled Our Rural Future which sets out the Government's response to the consultation, Speak Up for Rural Scotland.

25. The consultation asked for views on how best rural Scotland could contribute to the nation's sustainable economic growth set against a backdrop of reduced government expenditure, climate change and economic downturn. The paper identified the key priorities arising from the views of consultees, highlighting where action needs to be taken and commitments shared.

27. The Scottish Government has made provision for the allocation of funding for the Scottish Land Fund in the next three financial years (2012-15). Further details will be announced in due course.

28. Education plays an important part in building communities and in maximising the attainment and life changes of young people. This can be particularly important in rural areas in order to preserve, support and develop rural communities. This is being explored within the remit of the Commission on the Delivery of Rural Education.

29. Public services are part of the bedrock on which our society and future prosperity depends and they have a vital role to play in supporting economic development and regeneration. In June 2011, the Commission on the Future Delivery of Public Services (the 'Christie Commission') recommended actions to improve the quality of public services provided in Scotland and ensure their future financial sustainability.

30. In response to the Christie Commission's recommendations, the Government is committed to an ambitious programme of reform in public services built on four pillars:

31. A Cabinet sub-committee on public service reform has been convened to shape and co-ordinate progress across the Government's programme of improvement and reform.

32. The three Scottish Government social policy frameworks ( Equally Well, Achieving Our Potential and the Early Years Framework ), and Getting It Right For Every Child (GIRFEC), which provides the delivery framework for all services and agencies working with children and families, alongside Equal Communities in a Fairer Scotland , provide the strategic framework for tackling the long-standing inequalities that exist in Scotland. The Frameworks cover key actions being undertaken by the Scottish Government and its partners to tackle significant social problems experienced by some individuals and communities in Scotland. The Child Poverty Strategy for Scotland builds on the principles of these frameworks and sets out how the Scottish Government and its partners are focussing on maximising families' resources, improving child wellbeing and reducing the impact of poverty in children. More Choices More Chances, the Scottish Government's strategy for reducing the number of young people not in education, employment or training, sits alongside these frameworks and includes a focus on prevention, intervention and sustainability. Successful delivery of these Frameworks and policies has a significant impact on delivering regeneration activity and directly influences the success of this Regeneration Strategy.

33. In addition, the UK Government's reform of the welfare benefits system is being introduced against a backdrop of cuts to welfare benefits and, whilst streamlining processes, this is likely to have a negative effect on the most vulnerable. It is important that national strategies and local action plans are managed to take account of these changes and to mitigate their negative impact.

34. Scotland's communities should be vibrant and inclusive - a place where everyone feels they belong and can achieve their potential. Evidence suggests that there are high numbers of people in disadvantaged areas who are unable to work through ill-health or disability, alongside those who are either underemployed or employed in poor quality employment which does not offer prospects of progression. The economic downturn clearly presents greater risks for disadvantaged groups, and many of the UK Government's ongoing changes to the welfare system are likely to magnify these risks. This makes it even more important for policy makers and delivery partners to take account of the needs of diverse groups when designing and delivering policies. It is important that people are placed at the heart of delivery and that they have a voice so that their needs - and assets - are taken account of by decision makers.

35. The Scottish Government's Skills Strategy and the approach outlined in Achieving Our Potential focus efforts on improving the capacity of individuals to move into better quality work, and on measures to boost the supply of jobs and growth in particular geographical areas. In addition, the Scottish Government's Opportunities For All programme will guarantee all 16-19 year olds a place in post 16 education and training. This will help give young people the strongest start in working life and mitigate the risk and harm of youth unemployment.