This page details the methodology behind the Scottish Government Environmentally extended Input-Output model (EIO). This was developed during 2009 to estimate the Greenhouse Gas (GHG) reported in the first High Level Carbon Assessment of the Scottish Draft Budget 2010/11, published in September 2009.

In 2008 the Cabinet Secretary for Finance and Sustainable Growth made a commitment to publish estimates of the Green House Gas emissions associated with the planned government spending as detailed in the Scottish Government Draft Budget, scheduled for publication in September 2009. This fulfils the statutory requirement under Section 94 of the Climate Change (Scotland) Act 2009 to report upon the emissions impact of expenditure proposals.

A range of experts acknowledged in evidence to the Transport, Infrastructure and Climate Change Committee that the carbon assessment of spend is a complex process and that there is no single recognised estimation methodology. Recognising the challenging nature of the task, the Scottish Government convened an expert workshop at the end of November 2008 to discuss the merits and limitations of different methodologies, and identify the most appropriate way forward. Having considered a number of possibilities, Environmental Input-Output (EIO) analysis was identified by the contractors as providing the best option to provide a high level assessment of the impact of Government spending on emissions.

From 2010, there is a statutory requirement for the Scottish Government to publish GHG emissions estimates alongside their spending plans.

The methodology underpinning the latest Carbon Assessment of the 2022-23 Budget remains the same as for the Carbon Assessment of the 2020-21 Budget, the base year of Environmental Input-Output (EIO) model itself has been updated from 2015 to 2017.  This is possible because of the newly available input-output analytical tables covering the year 2017 for Scotland and the UK.  As usual the model has also been updated to use the latest available Greenhouse Gas emissions ratios and HM Treasury deflators.

GHG Effects estimates, based on this latest model are available on this page.

Overview of the Input-Output model

Input-Output (IO) is a generic term used to refer to a class of statistical tables within the IO framework. The tables provide a complete picture of the flows of goods and services in the economy for a given year. They detail the relationship between producers and consumers and the interdependencies of industries.

Symmetric tables (a.k.a. the Analytical Tables) are derived from the Supply and Use Tables and represent the modelling aspect of the IO framework.

In this analysis, the Symmetric Industry-by-Industry Leontief Inverse Tables have been used to estimate total industrial output as a result of changes in final uses.

The Input-Output methodology estimates the indirect output changes as a result of changes in final uses. Average industry-level environmental data are then used to estimate the environmental impacts per £1m sold by an industry. This is the greenhouse gas ratio or the emissions in tonnes of Carbon Dioxide equivalent gases for each £1m of output. Since the tables detail inter-industry purchases, it is possible to estimate the overall carbon impact required to meet changes in final uses by Government. Such extended tables are commonly referred to as Environmental Input-Output models. The application of IO models to assess environmental impacts is well established.

The high-level assessment of the Budget uses the Scottish Government Environmental Input-Output model for domestic emissions and a 'closed economy' UK model for emissions associated with imported goods and services. Ideally, country-specific IO tables and emission factors would be used for imports but the data required for such multi-region models were not available during the development of the Scottish Government EIO. The United Kingdom Input-Output model is therefore used as a proxy, given that the rest of the UK is Scotland's largest trading partner. The latest Scottish EIO is based on Scottish Government Input-Output tables for 2017 (published in November 2021), the UK EIO is based on the Office for National Statistics (ONS) United Kingdom Analytical Input-Output Tables for 2017 (both consistent with Blue Book 2020). The emissions to output ratios are derived from ONS Environmental Accounts, atmospheric emissions: greenhouse gases by industry and gas for 2015 (published September 2021), applied to industrial output figures from ONS UK Supply and Use tables for 2017 (again, Blue Book 2020 consistent).

Since the Scottish Budget planned spending relates to future years, all spending is deflated into 2017 prices before running the model. In the case of the latest published GHG effects - these are expressed in 2022/23 prices.

The published GHG effects detail the estimated direct and indirect greenhouse gas emissions (expressed in tonnes of carbon dioxide equivalent) as a result of £1m final uses from each of the 98 Input-Output industry categories. 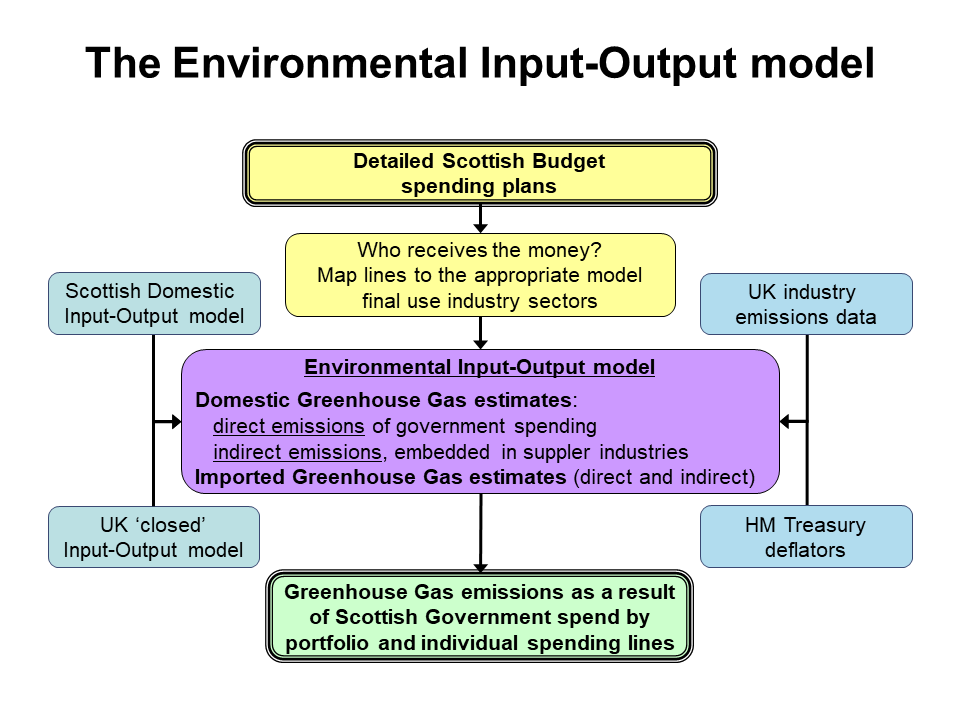 The High Level Carbon Assessment of the Draft Budget 2010/11 details the background, scope, results and detailed methodology. A useful summary paper of the methods applied was published by the University of Strathclyde Fraser of Allander Institute Economic Commentary February 2010, Vol 33, No 3, see pages 48 to 54.

The statutory requirement under Section 94 of the Climate Change (Scotland) Act 2009 to report upon the emissions impact of expenditure proposals.

The methodology and appropriateness for use were discussed at the Transport, Infrastructure and Climate Change Committee, on September 29th 2009. Details can be found in the official transcript.

Since publication the methodology and results have been presented and discussed at the Scottish Institute for Research in Economics Policy Forum in December 2009 and January 2010 as well as the ESRC/BRASS/RSA Workshop on methods for regional carbon and waste accounting: Perspectives from Scotland and Wales.

If you would like any further information please contact the Scottish Government Input-Output team using the details below.

Please contact the Input-Output team directly if you have any questions about the tables or require any help in using them.

We are especially interested in any work that you may be doing that uses any of the Supply, Use or Input-Output data. We would also be interested in any feedback concerning the layout and content of this web site or any other suggestions that you have.