Giving regard to global changes, it is relatively safe to assume that the technology landscape in which we operate will continue on its path of fundamental change. The biggest shift is anticipated to be in the private consumer space where there are already over 100,000 health-related apps available across Apple and Android, and with an increasing number of wearables, connected devices and trackers being used by the general population.

In January 2016, the Kings Fund published their view on eight technologies which are already being deployed in the NHS and internationally and which are most likely to change health and care over the next few years e.g. Smartphones, digital therapeutics such as computerised cognitive behaviour therapy, big data, connected communities. All of these are progressing in Scotland to an extent, however none are systematically deployed in our health and care system today.

"Some have described the smartphone as the new stethoscope, the difference being that the patient has one too." [5]

The uptake of consumer devices and options (privately purchased by individuals as part of their day to day living) will create a corresponding challenge for public sector services as our citizens will increasingly expect two things to be in place:

"The use of technologies such as smart phones, social networks and internet applications is not only changing the way we communicate, but is also providing innovative ways for us to monitor our health and well-being and giving us greater access to information. Together these advancements are leading to a convergence of people, information, technology and connectivity to improve health care and health outcomes." [6]

This three-year international programme was set up to improve Falls Prevention and Management, by supporting integrated care through improved care co-ordination and communication.

SmartCare was led by NHS 24, working in partnership with seven health and care partnerships in Ayrshire & Arran, Lanarkshire and Renfrewshire / East Renfrewshire.

Jointly funded by the Scottish Government and the European Commission, SmartCare has supported local communities and industry to co-design and develop three digital tools - a Person Held File, Care Coordination Calendar and a Falls Self-Assessment Tool, which enable the safe and secure sharing of health and care information including care at home appointments and medications. With the conclusion of the project phase, considerations on roll on and sustainability are progressing. See http://pilotsmartcare.eu/home for more.

As highlighted previously, our emphasis has now shifted to technology enabled service change, as opposed to service delivery with the addition of technology. This is supported by our own experiences and lessons learned, as well as a number of key research documents and reports from a number of recognised global experts (see appendix for a sample list of sources). It is also derived from our work with partners in Europe on developing the Critical Success Factors for Mainstream Adoption of Technology Enabled Care in Scotland. [7]

Our own self-assessment of activity across Scotland to date has also reinforced:

In 2013, York Health Economics Consortium were commissioned to evaluate Renfrewshire's use of Telecare to support people with Dementia in their own homes, demonstrating the significant benefits of utilising telecare in Scotland: 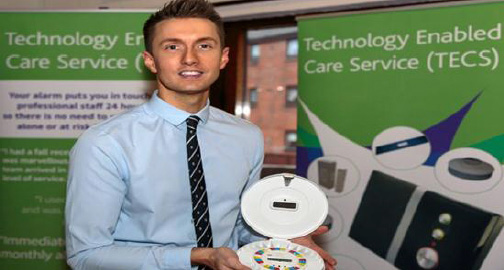