The Short-Term Rental Sector in Scotland

Self-catering accommodation provides a key supply of tourist accommodation in Scotland. Estimates from Scotland's Visitor Survey 2015 showed that just under one quarter of all tourists stayed in self-catering units (Frontline 2017).

The Association of Scotland's Self-Caterers (ASSC) commissioned Frontline to conduct research on the economic impact of short-term lettings on the Scottish economy (Frontline 2017). The research was conducted between July 2016 and March 2017 and used information from the Valuation Rolls of the Scottish Assessors Association, as well as Supercontrol booking records, an online survey of 669 visitors who used self-catering accommodation in Scotland during 2016, and additional data from 183 self-catering property owners. This analysis refers to traditional self-catering accommodation in Scotland and does not include sharing economy short-term letting via online platforms (Airbnb, HomeAway, HouseTrip, etc.), serviced apartments and apartment hotels (aparthotels).

The study found that, in 2016, there were around 16,160 self-catering properties in Scotland, with over half situated in the Highlands, followed by Fife, and Edinburgh and the Lothians (Table 1) (Frontline 2017).

As these figures are based on Scottish Assessors Association Rolls, they do not include properties that have not been assessed for business rates purposes, including, for example, some properties listed on Airbnb.

At town-level, the top 15 locations for self-catering businesses in 2016 are shown in Table 2. The majority of self-catering units were located in Edinburgh, significantly more properties than in any of the other locations.

Locations in Fife, where no town-by-town breakdown of properties was available, have been excluded.

Frontline (Frontline 2018) conducted a survey of traditional self-caterers in Scotland (including 268 ASSC members and non-members). Some key findings of this survey can be summarised as follows (Frontline 2018, p. 8):

From the above findings, it is clear that traditional self-caterers use, together with their own websites, collaborative economy platforms to advertise their listings, highlighting a shift towards these types of accommodation platforms.

Almost all self-catering units had fewer than 5 bedrooms, with properties in urban areas being smaller than those in small towns and rural areas. Just over half of all properties had capacity for up to five guests (Frontline 2017, pp. 7-8). Most bookings were for up to six nights (71%), while 23% of the bookings were for a week and 6% for eight or more nights. More than 30% of the bookings were made for the summer months, i.e. between June and August. Edinburgh and the Lothians received the biggest number of bookings made by overseas visitors, followed by the Highlands (Frontline 2017, pp. 9-10).

VisitScotland data (VisitScotland 2017b) confirms that bookings for self-catering accommodation showed a pronounced seasonal difference especially in rural areas, such as the Highlands and Orkney (Figure 1). The regions including Edinburgh and Glasgow showed relatively stable occupancy rates across the year.

In addition to traditional self-catering accommodation a range of collaborative platforms are now operating, offering tourist accommodation. Platforms acting for short-term lets include peer-to-peer and vacation rental platforms, as well as home swapping platforms, and represent the largest sector of the collaborative economy in Europe (Scottish Government 2018a).

According to a research report published in 2017 by Skift[3], the biggest peer-to-peer accommodation platforms with listings in Scotland (in November 2017) included:

Indigo House (Indigo House 2017) noted that hosts and accommodation operators may advertise their listing(s) using more than one online platform, so there is a risk of double-counting listings.

This section looks at Airbnb's activity in Scotland, as a representative of collaborative economy online accommodation platforms. It focuses on Airbnb for two reasons; firstly because of its dominating position among the peer-to-peer accommodation sector, and secondly because there are more publicly available data and reports on Airbnb activity compared to the activity of other similar platforms.

Airbnb has operated in Scotland since 2009 and is the largest peer-to-peer accommodation platform across the world. According to Airbnb, in 2017 the economic activity of Airbnb hosts and guests in Scotland was equal to £482.9 million (Airbnb 2018)[6]. VisitScotland estimated that Airbnb accounted for 5% of all tourism accommodation in 2016 (Scottish Government 2018a).

This section reviews reports published by Airbnb, academic findings, and research using data provided by intermediate agencies (Inside Airbnb and AirDNA), with the aim to drawing a general picture of Airbnb's activity in Scotland. It draws on information on the top destinations in Scotland for Airbnb guests, the number of Airbnb listings, type and length of accommodation provided by Airbnb, and information on hosts and guests.

The Open Data Institute (ODI), as part of the Institute's data innovation programme[7], studied the use of data on improving peer-to-peer accommodation[8] and concluded that even though there is a rich amount of data held by peer-to-peer accommodation platforms, access to these data is restricted (Open Data Institute 2018). Inside Airbnb[9] is an independent, non-commercial (open source) provider of data to explore how Airbnb is used around the world. AirDNA[10] is a market-based platform that tracks information on Airbnb listings by using publicly available data from the Airbnb website.

Airbnb disputes the accuracy of data scraped by Inside Airbnb and AirDNA. The Scottish Expert Advisory Panel on the Collaborative Economy pointed out "it is crucial that third party analysts focus on collaborating with platforms to access data at source, rather than relying on data-scraped information" (Scottish Government 2018a, p. 14). However, many academics and analysts use the scraped data to draw an overall image of Airbnb activity at national and regional level and argue that the outputs are accurate (Wachsmuth, Kerrigan et al. 2017). Caution is needed when drawing conclusions from scraped data analysis.

The focus of the section, besides Scotland, is on Edinburgh[11] for the following reasons. Firstly, it is the most visited destination in Scotland and receives the largest number of Airbnb guests. Secondly, it has the highest number of Airbnb listings, and finally, there is more research and evidence available about Airbnb activity in Edinburgh compared to other Scottish areas.

The top 5 Airbnb destinations (as measured by number of guests) in Scotland in 2017 were: Edinburgh, Glasgow, Inverness, Isle of Skye, and Oban (Airbnb 2018). The top 15 destinations are shown in Table 3 along with other information about the listings and hosts.

Figure 2 shows the growth in available (not necessarily new) Airbnb listings in Scotland between 2015 and 2017, using AirDNA data. There is an increase in the total number of Airbnb listings across Scotland of both entire homes and private rooms. 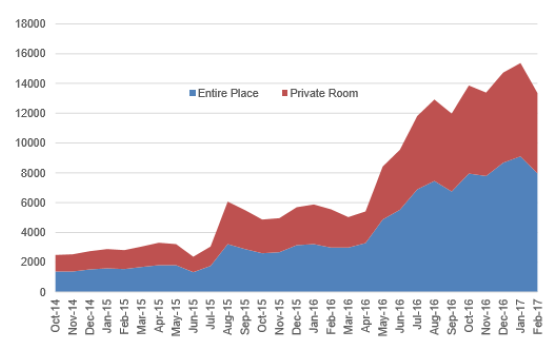 Based on Inside Airbnb data (retrieved from their website), there has been a notable increase in the number of listings in Edinburgh, with a total increase of +100.5% between July 2016 and July 2018 (Table 5). 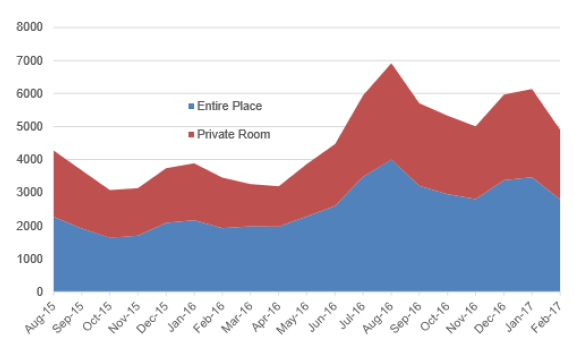 Edinburgh in 2018 had approximately 240 listings for every 10,000 people living in the city (SPICe 2019). Airbnb listings are spread unevenly across Edinburgh. In 2016, the city centre together with Leith Walk had the largest number of listings (Rae 2017) and also of new listings (Figure 4) (Indigo House 2017). "In the City Centre ward, there is one Airbnb listing for every 11 residents, with comparable figures of 23 for Leith Walk, 37 for Meadows/Morningside and 34 for Leith" (Rae 2017, p. 4). The Edinburgh City Centre ward had around 13,000 dwellings in 2018, with just over 2,000 Airbnb entire property listings, which means a ratio of 1:6.5 of entire property listings to dwellings (Chartered Institute of Housing 2019). There was also neighbourhood-based diversity regarding the number of Airbnb listings, ranging from 674 listings in the 'Old Town, Princes Street and Leith Street' (over 10% of all listings) and 4 in 'Barnton, Cammo and Cramond South' (Rae 2017, p.6). 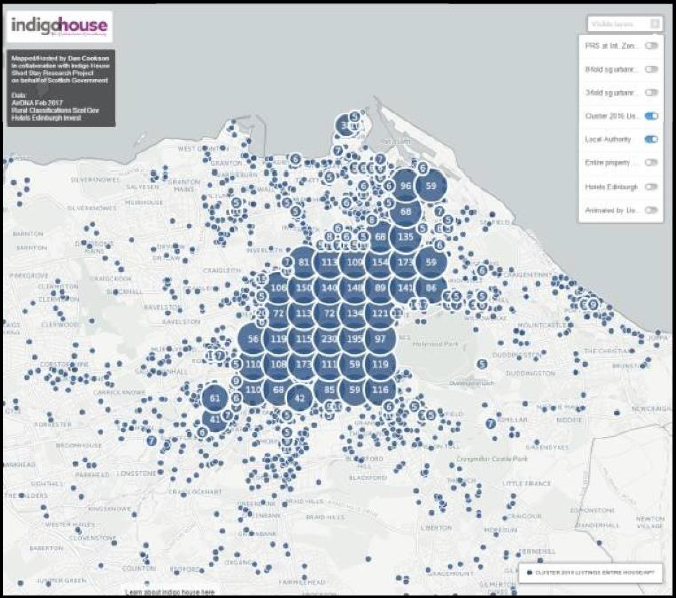 Figure 5 shows an Edinburgh map of the Airbnb listings (blue to red dots based on night price), the number of households that live within the private rented sector (PRS) (grey shading) and the number of Edinburgh hotels (yellow dots). Most of the red dots, which indicate the most expensive Airbnb listings, are located within the city centre (high PRS density) and very close to most of the hotels (Indigo House 2017). Areas with low density of PRS households (light grey) have very low or no concentration of Airbnb listings. Overall, the map shows an overlap between the private rented stock and Airbnb listings. 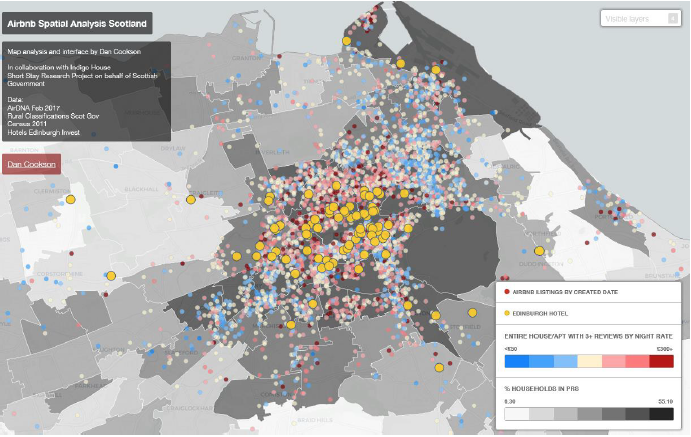 Renting out for short periods or renting out a spare room while the owners/occupiers remain in the property can be considered amateur activity and can be differentiated from running a business, which is typically operated by professionals, and from renting out an entire home/apartment for long periods. This section studies:

Entire homes, booked for long time periods, and multi-listings might potentially have a negative impact on housing stock and local communities. Wachsmuth et al. (2017) define these listings as the 'triple threat' listings[17].

Table 6 – Types of listing on Airbnb in Scotland

Table 7 shows an increase in the entire homes offered through Airbnb and, at the same time, a decrease in the renting out of private rooms.

Occupancy and Availability of Airbnb Listings

There are different types of participants in the collaborative economy (Scottish Government 2018a). In the peer-to-peer accommodation platforms, such as Airbnb, we find both occasional providers of tourist accommodation and professional operators. Professional hosts are more likely to be operating multiple listings compared to amateur hosts who are usually renting out a room or their main residence while they are away for short periods.

According to a July 2017 Airbnb report, in Edinburgh, Glasgow, the Highlands, Fife, Argyll and Bute, the majority of hosts had one listing (78%) on the platform and a further 14% had two listings (Airbnb 2017b). Just 2% of all hosts had 5 or more listings (Table 9).

* The top 5 destinations include Edinburgh, Glasgow, the Highlands, Fife, and Argyll and Bute.

Airbnb data suggests that, in September 2017, more than a third (2,030 of 5,474) of entire homes/apartments rented out through Airbnb in Edinburgh belonged to hosts with more than one entire home/apartment listing[20], who generated more than half of the revenue for this type of Airbnb listing[21]. Rae (2017, p. 2) highlighted that one host in Edinburgh had advertised 80 listings, while seven hosts had more than 20 and 28 hosts had 10 or more listings.

In 2016/17, just under half of guests (45%) arrived in Scotland between July and September, while 23% and 22% arrived between April-June and October-December respectively (Airbnb 2017b).