The numbers of authorised, active businesses and sites in operation are presented in Tables 3 and 4. Many sites held stock not yet ready for market, others were fallow, and some were positioned in remote areas where cost-effective production and marketing of shellfish proved difficult.

ACTIVE = FARMS IN A PRODUCTION GROWING CYCLE WHICH MAY CONTAIN STOCK OR BE FALLOW.
PRODUCING = PLACING ON THE MARKET FOR THE TABLE AND ON-GROWING

FIGURE 2
REGIONAL DISTRIBUTION OF ACTIVE SHELLFISH SITES IN 2011 (NUMBER PRODUCING GIVEN IN BRACKETS) AND NUMBER OF PRODUCING BUSINESSES BY AREA/SPECIES. 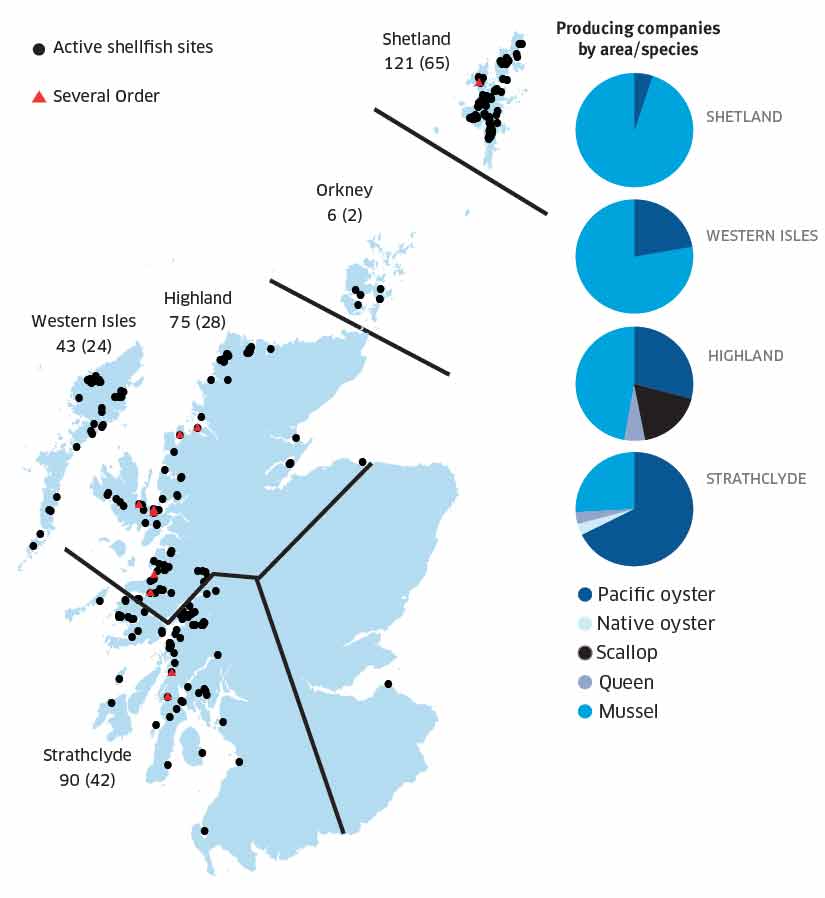 Ten Several Orders remain in place for scallop fisheries, two of which include native oyster (Fig. 2). Seven of these Orders are in the Highland region, two in Strathclyde and one in Shetland. The size of the Orders measure from 18m2 up to 31 ha.

Table 5 depicts the number of businesses by region and by species: A) in table production, B) in on-growing production and C) showing no production. Many businesses cultivate more than one species on site, a practice made possible by similar cultivation techniques. For example, scallop can be grown together with queen, Pacific oyster with native oyster, and mussel with Pacific oyster.

TABLE 5
NUMBER OF BUSINESSES BY REGION AND BY SPECIES 2011.

A) PRODUCTION FOR THE TABLE

B) PRODUCTION FOR ON-GROWING TO OTHER PRODUCERS