The survey indicates that the shellfish species cultivated in Scottish waters in 2011 were:

Production was dominated by mussel and Pacific oyster, although small quantities of scallop, queen scallop (queen) and native oyster were also produced. The 2011 production data for each species by region are given in Table 1.

TABLE = SALES DIRECTLY FOR HUMAN CONSUMPTION; ON-GROWING = SALES TO OTHER BUSINESSES FOR ON-GROWING.

Table production by species is illustrated in Figure 1 (see page 4), while trends in production for the table market and on-growing in Scotland are presented in Table 2.

Mussel production decreased by 3% from the 2010 total and survey responses attribute the cause of the decrease to include: environmental effects such as variation of spat settlement in time and place in recent years; the detection of toxins which hampered sales, and several businesses which ceased trading (see figure 1). The greatest contribution in regional mussel production was from Shetland, accounting for 4,567 tonnes or 65% of Scotland's total. Pacific oyster production increased by 4% from 2010. The Strathclyde region produced about 84% of Scotland's farmed Pacific oysters. Queen production fell by 85% since 2010, a contributing factor was reported as poor spat settlement, while production of farmed scallops increased by 22%, continuing to target niche markets. Native oyster production remained the same accounting for a small percentage of total oyster production, however, demand for this species continues to be high. 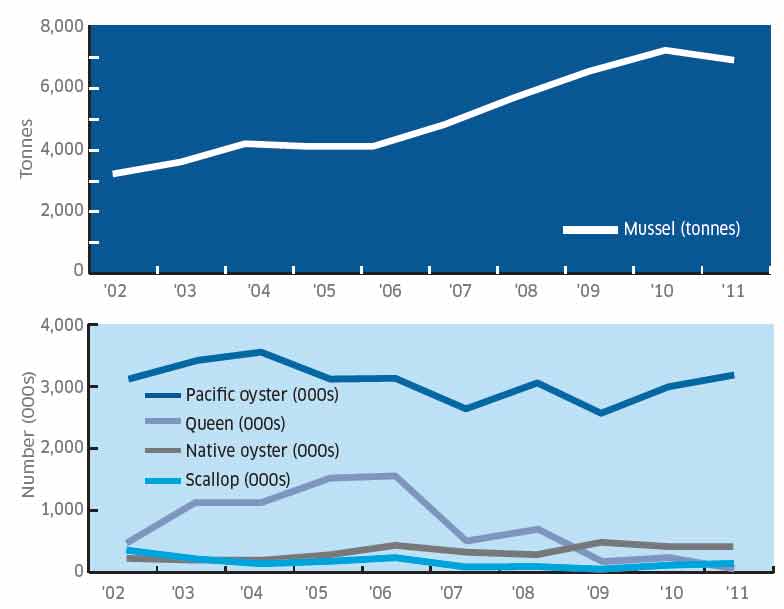 Prices of farmed shellfish fluctuated throughout the year. Their value at first sale was estimated from the following figures (Supplied by industry. These vary with demand, level of production and geographical area of orgin). The price of Pacific oyster was around £0.40 per shell; native oyster, £0.40 per shell; scallop, £1.15 per shell; queen scallop sold for approximately £0.10 per shell; and mussels from £900 to more than £1,700 per tonne. The value of the table trade is estimated from the production figures shown in Table 1.