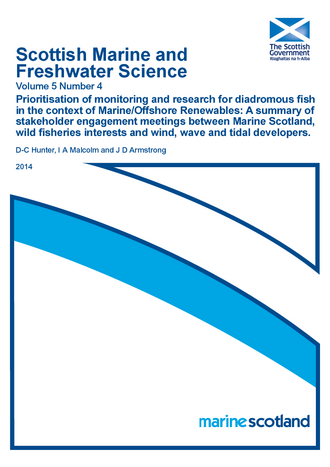 Two groups of stakeholders were identified by Marine Scotland as part of the consultation exercise, these were (1) managers interested in either target fisheries or the conservation of wild migratory fish and (2) wind, wave and tidal developers. Separate workshops were undertaken for these two groups. Stakeholder meetings were established by sending out invitation emails which provided background information and explained the purpose of the meetings. A total of 41 individual delegates attended the stakeholder meetings. Representatives of a further 4 wild fisheries groups provided information which was subsequently incorporated into this report although they were unable to attend in person. A list of invited stakeholders and a summary of all representatives are provided in Table 1 and Figure 1.

Figure 1: The contribution of all attendees by sector

Prior to the meetings all attendees were sent an agenda and relevant background papers:

Both meetings started by presenting the background and context for the NRMSD as identified by Malcolm et al. (2013), and the current MSS work program for which resource had already been committed. The morning session included presentations from Marine Scotland Science followed by facilitated discussions. The afternoon session was devoted to facilitated discussions, including the prioritisation exercise. The workshop was intended to give delegates an opportunity to identify and consider research and monitoring needs, but also consider options for delivery. A summary of the facilitated discussions and research prioritisation is presented below. At the close of each meeting, the chair summarised the priority areas to ensure that priorities had been appropriately captured during the consultation process.

Five questions were identified prior to the workshops to facilitate discussion and ensure that the main issues were considered. The following summarises the outcomes of both stakeholder meetings in relation to these questions.

A. Are the stakeholders satisfied with the priorities identified in the scoping document?

B. Are the areas of work identified for scoping by MSS in the current work plan also the priorities for the stakeholders?

The five preliminary priority areas proposed by MSS for discussion were;

2) Development of Acoustic arrays (Near river and Coastal)

4) Assessment of the affects of AC EMFs.

There was extended discussion on the preliminary priority areas. The overall outcomes from both stakeholder groups was that establishment of the spatial and temporal distribution and population status of the wild fish was important. Both these aspects were highlighted and explored in the scoping document (Malcolm et al, 2013). The wind, wave and tidal renewable energy stakeholder group emphasised that these priority areas are also important for other coastal developers such as aquaculture and it was felt that the burden of developing such projects should not fall solely on the shoulders of marine/offshore renewable developers. The wind, wave and tidal renewable energy stakeholders expressed caution over what could realistically be achieved in terms of research and monitoring that could support developments. Furthermore they highlighted that it was important to clearly identify the context of the work and how the resulting outcomes would be used for management and decision making, for example, in marine spatial planning and regional locational guidance.

Three other areas were also identified as important to both stakeholder groups:

These three aspects were also highlighted and explored in the scoping document (Malcolm et al. 2013).

The wind, wave and tidal renewable energy stakeholders discussed the potential types of local projects that could be undertaken to explore noise, electromagnetic fields and the risk of collision/strike. This aspect was felt to be important but it was not clear how or where this type of research would fit within the NRMSD. The wild fisheries stakeholders indicated that site-specific issues, such as those related specifically to the technology employed, for example the type of blade used or cabling arrangements on the renewable devices, should be dealt with by the developer directly and that the NRMSD should focus on national projects not individual issues such as these. So, for example, an overall understanding of the likely impact from noise in the construction and operational stages of the development should be explored in the NRMSD. Similarly the likely impact from electromagnetic fields to migration and the potential likelihood of strike/collision should be explored within the NRMSD.

The wild fisheries stakeholders suggested that it was clear that fish will be able to detect the noise produced from marine/offshore renewable developments at some distance, however the behavioural consequences of this are poorly understood. The wind, wave and tidal renewable energy stakeholders were aware of and appreciated the concerns of the wild fisheries stakeholders over the ability of fish to detect noise and subsequent behavioural effects that this had therefore this has been explored in their Environmental Impact Assessments. They felt a NRMSD to explore the noise aspects from all stages of construction, operation and decommissioning was important to ensure consensus in terms of actual impact in this area.

Both stakeholder meetings included detailed discussion of the potential effects of Electro Magnetic Fields. It was noted that experimental work was being undertaken by MSS to investigate the interactions between Atlantic Salmon and AC electromagnetic fields. The wind, wave and tidal renewable energy stakeholders indicated the importance of publishing results as soon as possible. Wild fisheries stakeholders also identified the need for rapid publication of results but also highlighted the importance of disseminating the research to as wide an audience as possible.

Finally the wind, wave and tidal renewable energy stakeholders suggested that research had already been undertaken (for example Thorley, 2013) and these published reports and their outcomes should be made widely available.

C. Is the stakeholder group satisfied with a work program focussed on a regional northern/east coast scale providing that findings are more generally transferable to the national level?

Both stakeholder groups confirmed that a NRMSD initially focussed on delivering transferable knowledge from work undertaken at a regional north/east coast scale would be appropriate. Scottish National Heritage noted the importance of ensuring that coastal waters in the west of Scotland were not excluded. It should also be noted that although all District Salmon Fishery Boards were invited to the stakeholder meeting, no west coast boards attended and only one west coast board provided comment (via telephone). The Wild fisheries stakeholders indicated that any regionally focussed work should demonstrate wider value and applicability for it to be included in the NRMSD. It is expected that as the NRMSD develops, projects will be undertaken in coastal waters across all regions depending on information requirements and opportunities

D. What are the local research priorities and is there potential to develop local issues into the national strategy

At both stakeholder meetings there was some discussion of local issues. Both stakeholder groups agreed that at this stage there were not any additional local research priorities that needed to be specifically included in the NRMSD beyond those common issues identified in the scoping document.

E. Is the stakeholder engagement strategy appropriate or are there alternative engagement processes that would be preferred?

3. Progress since the Stakeholder Meetings
1. Introduction