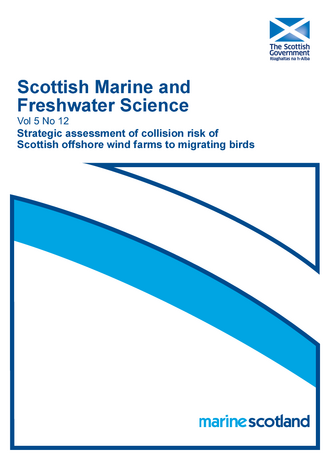 1.1. Development areas for offshore wind energy in Scottish territorial waters included in the Scottish Government's Blue Seas- Green Energy Marine Plan are also important areas for a wide range of bird species either in the breeding and wintering seasons or during passage migrations.

1.2. Offshore wind energy developments have the potential to impact on birds by displacing individuals from feeding areas etc., and also through collision of birds in flight with the rotating turbine blades and through barrier effects increasing the energetic costs associated with transit between locations. These interactions are most often discussed in the context of seabird populations at breeding colony Special Protection Areas ( SPAs). However, there is also potential to interact with a wide range of species that migrate to and from the UK. These include seabirds, wildfowl, waders, passerines and raptors. The primary concern in relation to these species is of collision with turbine blades.

1.3. The established modelling approach to estimating collision risk employed in environmental assessment of wind farms (the Band model) was developed by Band in 2000, updated in 2007 and has since been updated for use in the marine environment (Band 2012). For seabirds this now includes flight height distributions to further refine collision estimates.

1.4. For this study, UK seabird and non-seabird species populations potentially at risk from collision with turbines at Scottish offshore wind farm sites were short-listed, proportions of the populations likely to pass the wind farm sites estimated and collision risk modelling performed. Wind farms out-with Scottish waters are not considered, neither are the impacts of displacement and barrier effects, nor are in-combination effects with 'wet' renewables and other activities, nor impacts on populations outside of migration periods.

1.5. In total modelling was carried out for 27 species of seabirds and 38 non-seabird species. For seabirds, modelling sensitivity analysis was performed by assuming different migratory corridors and distributions within those corridors and species specific flying height distributions. It was not possible to apply a similar approach for non-seabird species, as their migration routes are typically less well known.

1.6. A number of assumptions were made in the analyses, including on migratory routes and bird distributions within those routes, flight heights and turbine avoidance rates (98% was used for all species). In addition, where contemporary population estimates were not available the analyses made use of historic population counts. The resulting outputs are sensitive to those assumptions and for most species improvements in the reliability of the estimates presented will require efforts to improve understanding of migration routes and avoidance rates.

1.7. Seabird collision mortality estimates were dependent on the proximity of passage routes to shore and the distribution (even or asymmetrical) of birds across the migration corridors. Collision mortality estimates were assessed in relation to an indicative threshold value of 1% of the passage population. Modelling estimates for two seabird species - great black-backed gull and herring gull, had collision mortalities of over 1% of the migrant populations (the latter were derived using the flight height collision model 'Option 3'). When the Option 1 collision model was applied six species had maximum total collision estimates which exceeded 1% of the passage populations: cormorant; common gull; lesser black backed gull; herring gull; great black-backed gull and common tern (derived using the far offshore coastal strip and uniform flight distribution). It should be noted that the 1% value has been used as an indicative threshold to guide interpretation and does not have a specific biological basis.

1.8. Notwithstanding the assumptions, risks and caveats outlined above, this report's primary value will be informing large-scale indicative strategic assessments. Overall, birds on migration through Scottish waters are not considered to be at risk of significant levels of additional mortality, due to collisions with Scottish offshore wind farms. Possible exceptions are large gulls, cormorant and common tern.