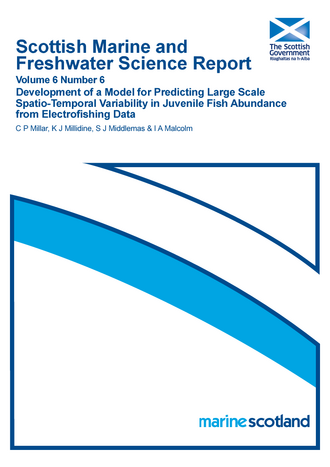 Models of juvenile salmonid abundance are required to inform electrofishing based assessment approaches and potentially as an intermediate step in scaling conservation limits from data rich to data poor catchments. This report describes an approach for modelling large-scale spatio-temporal variability in fish densities using GIS derived covariates. The technical challenges, modelling approaches and software developed during the project are described. The utility of the approach was illustrated by fitting models to data on Atlantic salmon fry.

Multi-pass electrofishing data was collated from fisheries trusts, fisheries boards, SEPA and Marine Scotland. Covariates describing spatial, temporal and habitat variability were obtained for each sampling event. A two stage likelihood based modelling approach was developed. Firstly, capture probability was modelled in relation to covariates. Secondly, densities were modelled in relation to covariates, conditional on estimated capture probabilities. A software package was developed for the R statistical programming environment to perform the analysis.

The modelling approach was illustrated using a case study of Atlantic salmon fry. Capture probability varied strongly with data provider, time of sampling (Day of Year: DoY), location and year and to a lesser extent with distance to sea, channel width and gradient. The risks of assuming constant capture probability were demonstrated by comparing modelled density estimates with those obtained by assuming a constant mean capture probability. Assumptions of constant capture probability resulted in considerable spatial bias in density estimates, but could also generate temporal bias. This illustrates the continued requirement for multi-pass electrofishing data and the constraints on the use of single-pass or timed data for quantitative assessments in the absence of adequate calibration.

Fry densities varied with catchment, and with habitat variables: distance to sea, altitude, upstream catchment area and to a lesser extent channel width, gradient, DoY and landuse. The potential of spatial covariates (catchment and river connectivity) to indicate deviation from an average national model and thus describe the relative performance of catchments or sites is illustrated as a potential assessment approach for management.

It is recommended that future work focusses on (1) quality control of site location data and identification of non-representative electrofishing samples ( e.g. fishing only marginal areas in wide rivers) through interaction with data providers and (2) further development of software to allow simultaneous consideration of multiple species (salmon and trout) and life stages (fry and parr) together with river network effects across multiple catchments.