2 LOCAL GOVERNMENT INCOME - WHERE THE MONEY COMES FROM

The main sources of Local Government income are 1:

The total amounts of ring-fenced revenue grants within TRF are determined in advance as part of the local authority finance settlement. As well as the ring-fenced revenue grants which form part of TRF, local authorities can receive other grants in addition to TRF. These grants are demand led and generally do not have an established means of distribution that can be applied in advance. Table 2.2 below shows a breakdown of the Revenue Grants received by local authorities and their growth over time.

In the 2008-09 local government finance revenue settlement, many formerly ring-fenced revenue grants were rolled up into GRF. A few examples 2 of these rolled up grants include the Supporting People Grant, the Strategic Waste Fund and the National Priorities Action Fund. These formerly ring-fenced grants would have been recorded as either Ring-fenced Revenue Grants or Other Grants and Subsidies for the financial years up to and including 2007-08. From 2008-09, the rolled up grants have been recorded as part of GRF. As a result of this change to grant distribution and recording, the level of GRF is showing a much larger than usual increase from 2007-08 to 2008-09, while both Ring-fenced Revenue Grants and Other Grants and Subsidies are showing corresponding decreases in their level of funding from 2007-08 to 2008-09.

Council Tax was introduced in Scotland on the 1 st April 1993 to replace the Community Charge system. It is a tax system based on dwellings. A dwelling is classified as any kind of flat or house that is used as a place of residence. Each dwelling is placed into one of the 8 council tax bands (A to H) depending on the market value of the dwelling as at the 1 st April 1991. Table 2.3 details the band boundaries, the ratio to band D council tax (the multiplier) and the number of chargeable dwellings in each band by local authority.

Each local authority determines its own level of council tax as part of their budget setting process, and is responsible for its billing and collection. Council tax is used as a source of funding to make up the difference between the amount of money a local authority wishes to spend, and the amount of funding it receives from other sources (such as GRF and ring-fenced revenue grants). The Scotland band D council tax level, and its change over time, can be seen in table 2.4.

1. In 2010-11, Council Tax rates were frozen in all local authorities at 2007-08 levels.
2. Real terms figures are calculated using GDP deflators
3. This average is taken over all chargeable dwellings and is affected by a number of factors such as the distribution of dwellings across council tax bands, discounts and exemptions.

Each individual bill is calculated by applying the multiplier for each band (see table 2.3) to the band D level, (and then any discounts are applied). Therefore, bills vary according to council tax band, but also by Local Authority as shown in Map 2.1. The changes in Band D council tax levels by local authority over time are shown in table 2.5. 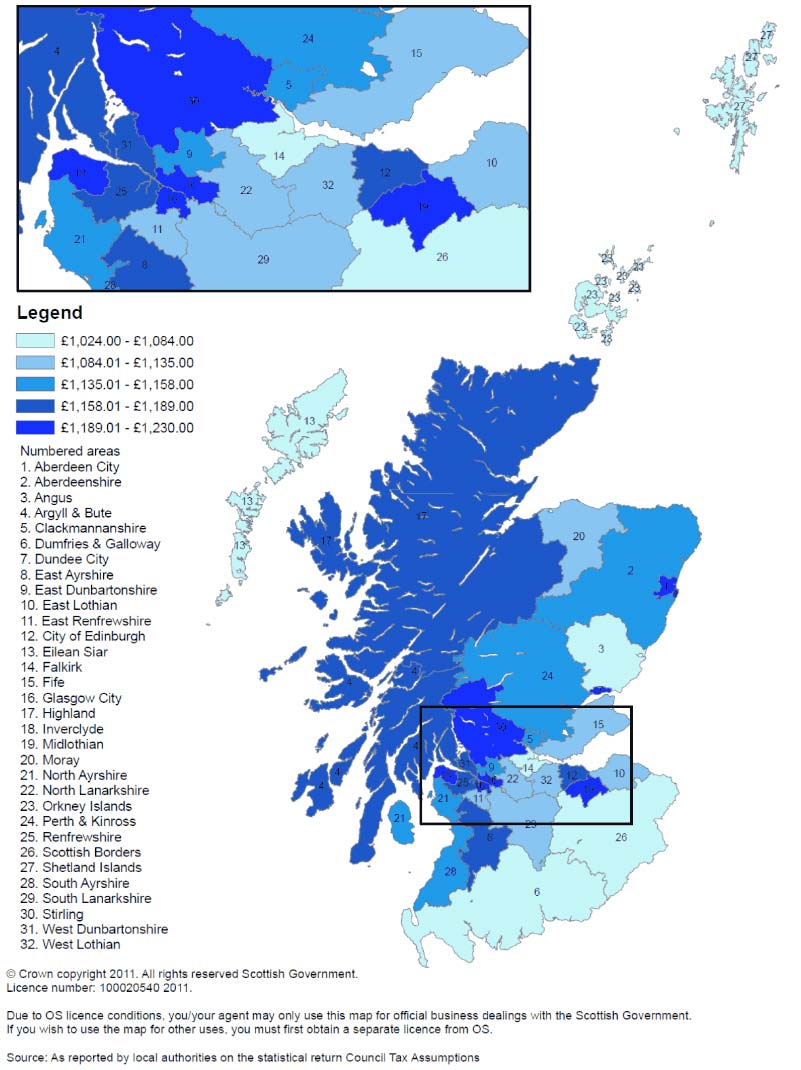 Not all dwellings are liable to pay full council tax. A dwelling may be eligible for a discount or exemption dependent on the personal circumstances of the persons resident in the dwelling. If a dwelling is exempt there is no council tax payable in respect of that dwelling. If a dwelling is eligible for a discount then the discount may range from 10% to 50% depending on the nature of the discount.

Where only one council tax liable adult resides in a dwelling they are entitled to claim a 25% discount on their council tax bill. Where a dwelling is classed as a second home or long term empty, that dwelling is entitled to claim a discount of between 10% and 50% depending on the Local Authority. Unoccupied dwellings may also be eligible for a 50% discount for the 6 months after the initial 6 month exemption.

A breakdown of council tax dwellings by classification as chargeable, discounted, or exempt from 2006 to 2010 is given below in table 2.6.

The principles of Non-domestic Rates ( NDR) were established in the Lands Valuation (Scotland) Act of 1854. This Act also provided for the appointment of Assessors, who are responsible for determining the classification of a property as domestic or non-domestic and assigning a valuation. A non-domestic property is an individual property used for non-domestic purposes. They can include businesses, public buildings and advertising hoardings. The value given to a property is called its rateable value. Assessors list each property on the Valuation Roll with its corresponding rateable value that is used to calculate its NDR bill. Tables 2.8 and 2.9 show the composition of the properties on the Valuation Roll by Classification, Local Authority and Valuation band.

Business rate revaluations normally take place every five years. The most recent revaluation came into effect on 1 April 2010. The purpose of revaluation is to ensure that the tax burden is distributed fairly by taking account of changes over time in market conditions and individual business circumstances. At each revaluation, the Scottish Assessors, who are independent of both the Scottish Government and local authorities, assess a rateable value for each non-domestic (business) property in Scotland by taking account of the type and nature of the property in question. The next revaluation is scheduled to take effect on 1 April 2015.

Table 2.8 - Non-Domestic Rates Properties by Classification (as at 1 April 2010)

NDR bills are calculated by multiplying the rateable value of a property by the poundage rate. The Scottish Government sets the rate poundage, which applies to the whole of Scotland. In 2006-07, Scottish Ministers committed to the equalisation of the Scottish poundage rate with that of England, and in 2007-08 this was achieved. The annual NDR Income, total Rateable Value, and Poundage Rate, as well as their changes over time, are shown in table 2.10. Due to the 2010 revaluation, the total Rateable Value of Non-domestic properties (the tax base) increased from £5.3 billion in 2009-10 to £6.6 billion in 2010-11, however, the overall impact on Non-Domestic rate bills will be zero over the 5 year revaluation cycle as the poundage reduction must be taken into account when calculating bills. Additionally, exempt properties (which do not pay rates), along with the impact of appeals and relief schemes such as the Small Business Bonus Scheme, will also significantly reduce the amount paid in bills.

1. The most recent business rates revaluation came into effect on 1st April 2010
2. A number of individual councils collect certain rates bills on hehalf of all 32 councils. For example, Fife collects rates for Scottish Water, South Lanarkshire for Electricity Companies and Renfrewshire for Telecoms.
3. Includes those with a zero rateable value.
4. Mid-year estimate.

The figures presented in Table 2.11 are shown net of reliefs. Relief 4 arrangements apply to properties including, but not exhaustively, qualifying village stores, post offices, petrol stations and public houses/hotels, stud farms, empty properties, properties owned by charities and premises used for religious worship. From 1 April 2008, the Small Business Rates Relief Scheme ( SBRRS) was replaced by the Small Business Bonus Scheme ( SBBS), both of which targeted properties with rateable values on the lower end of the spectrum. The cost of the SBBS scheme is much greater than that of the former SBRRS, resulting in a larger than usual increase in the gross amount of reliefs awarded from 2007-08 to 2008-09. In 2009-10 the mandatory element of reliefs for Sports Clubs were collected separately from the discretionary element for the first time. Table 2.12 shows the amounts of the main reliefs received from 2005-06 to 2009-10.

1. Provisional notified General Revenue Funding ( GRF) is guaranteed this means that any reduction in the amount of NDR collected is compensated for by a corresponding increase in GRF and vice versa.

estimate of relief expenditure for 2009-10
2. The mandatory element of Sports Club relief was not collected separately prior to 2009-10
3. From 1 April 2008, the Small Business Rates Relief Scheme was replaced with the Small Business Bonus Scheme.
4. Relief for Former Agricultural Premises was a time limited relief which ended at 31 March 2008

NDR income is collected by Local Authorities and pooled at the Scotland level. Each council, having collected its taxes, reports the Non-Domestic Rates collected to the Scottish Government to be included in the central pool. The amount to be re-distributed from the pool is known as the Distributable Amount ( DA) and is set by the Scottish Government before the start of the financial year in question and redistributed to individual local authorities on the basis of population shares. It is based upon a forecast of the NDR income and prior year adjustments, and is therefore not guaranteed to match the total contributions to the pool for that year.

The DA forms part of the Total Revenue Funding ( TRF), which represents the Government's revenue funding for core local government services. As the combined total of NDR income and

Local Authorities receive income from sales, rents, fees and charges as a result of providing services. These services are wide ranging in nature, as is the amount of income associated with each service, as detailed in Table 2.14 below.

Other revenue income consists of all other grants, reimbursements and contributions, some income from interest on revenue balances, and increases in revenue balances. All other grants, reimbursements and contributions consists of revenue income received to finance a project/function jointly undertaken with other non-government bodies and the value of the costs recharged to outside bodies (including other committees). Table 2.15 below details other income by fund or reserve.

1. These figures are those reported by local authorities in their 2009-10 Final Capital Return. The figures in this table may not therefore necessarily agree with the breakdown of capital grants detailed in Finance Circular 9/2010.
2. Figures include Housing Revenue Account

Capital receipts are capital income, normally generated by the sale or disposal of an asset. They may only be applied to capital expenditure or for the write down of capital debt.

Table 2.17 details capital receipts raised by service type from 2005-06 to 2009-10. As can be seen in the table, within General Fund services, the service area with the greatest amounts of capital receipts has consistently been Other Services. This trend is reflective of advice given to local authorities to manage surplus assets centrally, rather than in their original service portfolios, so that any sales of these surplus assets can be managed most effectively. A detailed breakdown of Capital Receipts by Service for 2009-10 can be found in Annex E.