193. Respondents’ views on their ability to keep warm in the winter and why this may be difficult is a useful context for understanding statistics on fuel poverty and energy efficiency in the home.

195. Of those reporting that their heating system keeps them warm in winter “only sometimes” or “never”, 22% report this to be “a serious problem”, 52% “a bit of a problem”, while 26% said it was “not very much” or “not a problem”. This distribution is similar to the results from the 2016 survey.

196. As shown in Figure 25 this means that, of all households, 4% reported their heating not keeping them warm in winter, and this to be “a serious problem”, while 10% said it was “a bit of a problem”, both which are at similar levels to 2016.

Figure 26: “Does Your Heating Keep You Warm Enough in the Winter?” by Household Type, Tenure and Primary Heating Fuel; SHCS 2017 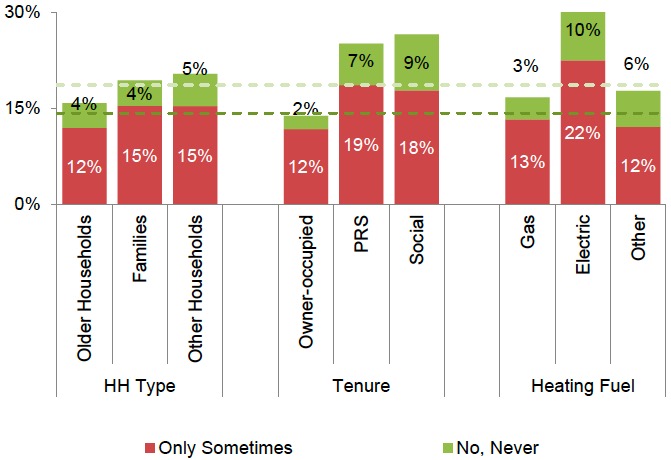 197. Figure 26 shows respondents’ views on how well their heating systems keep them warm in winter vary depending on household (HH) type, tenure and the primary heating fuel they use.

199. Householders with electric heating have high propensity to report that their heating systems does not keep them warm in the winter (32%).

200. Social and private renters also have increased likelihood to report that their heating does not always keep them warm compared to owner occupiers. For social sector tenants this is in contrast to the relatively better energy efficiency of the dwellings they occupy compared to the housing stock overall (as shown in Table 19).

201. Figure 27 shows how the proportion of householders reporting that their heating does not always keep them warm has changed over time, allowing for the margin of error. However, following the significant decrease in 2016, there was not a significant change in the proportion in 2017. 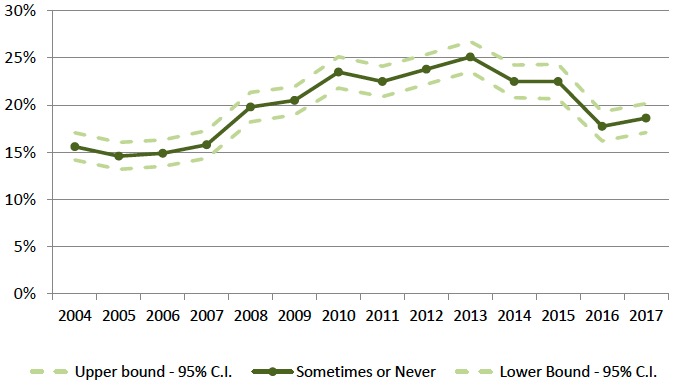 202. The reasons why people find their homes difficult to heat are shown in Figure 28 and Table 39. The most common reasons relate to poor energy performance of the dwellings: poor heating systems and draughts (14% and 12% respectively) followed by insulation and windows (7% each). About 5% of all surveyed householders consider it unaffordable to achieve the indoor temperatures they want. This is higher among private and social renters (9% each) compared to owner occupiers (2%). On the whole private rented and social sector tenants are more likely than owner occupiers to report difficulties. 68% of all interviewed households did not report any problems heating their homes.

Figure 28: Reasons Heating Home is Difficult by Tenure, 2017 (% of households) 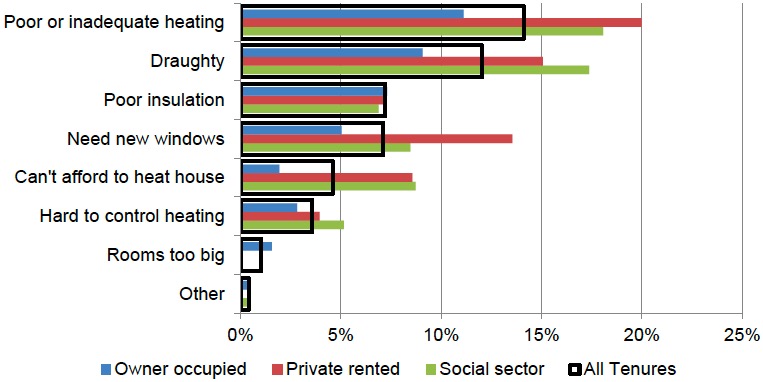 Note: responses have been grouped by theme, as described in section 7.9.5. More than one answer allowed so that the sum of responses can exceed 100%.

Table 39: Reasons Heating Home is Difficult by Tenure, 2017 (% of households)

Note: Respondents are permitted to select more than one response. For this reason the sum down a column can exceed 100%

205. Since 2008 the SHCS has asked respondents to what extent they monitor their energy use and whether or not they have energy monitoring devices.

207. However the proportion of those who report monitoring their energy use “fairly” or “very closely” followed a pattern of improvement. As shown in Table 41, the proportion increased from 44% in 2008 to 54% in 2012 and has remained around that level since (54-57%).