11. The Scottish House Condition Survey provides a snapshot of the Scottish housing stock in each survey year. This chapter sets out information on the basic attributes of occupied Scottish dwellings as captured in 2017. Subsequent chapters build on this and provide more details on energy efficiency, fuel poverty, housing quality and disrepair.

12. The following topics are included:

13. The age of construction and the built form of a dwelling has consequences for energy performance, the improvement potential, affordability and living conditions. For example, dwellings built since 1982 comply with standards for minimum levels of energy efficiency and airtightness.

14. More information on the main dwelling types used in the SHCS is provided in section 7.9.1.

15. At the same time, types of dwellings can differ in terms of the size of exposed areas: fewer exposed areas of wall, or shielding by dwellings above and below, lead to lower levels of heat loss than in buildings with fewer sheltered sides.

16. The Scottish housing stock is diverse and varies across the country and between rural and urban areas. However, some common types can be recognised in Figure 1:

17. These six broad categories account for 63% of the overall housing stock. However, there is also a good deal of variability within these groups; even among pre-1919 tenement flats of the type common in Edinburgh and Glasgow, there is a wide range of sizes, shapes and areas of exposure (for example in top floor flats the roof is exposed) which affects their energy efficiency and the living conditions they provide.

18. The proportion of the stock in each dwelling age band and type is provided in Table 1. Numbers of dwellings of each age group and type are shown in Table 2.

20. The size of the internal floor area has implications for the heating requirements of a dwelling. Larger dwellings require greater heat inputs and therefore cost more to heat. This has a direct impact on fuel poverty (see Chapter 4).

21. Pre-1919 dwellings tend to be larger than the other two age categories and this applies across all dwelling types with the exception of tenement flats which on average are comparable in size to more recently built ones (Figure 2). Detached and terraced houses built after 1919 are on average around three-quarters of the size of those built pre-1919. Semi-detached houses built after 1919 are on average around two thirds of those built pre-1919.

22. The overall average for post-1982 dwellings is somewhat higher compared to those built between 1919 and 1982. This is largely driven by differences in detached houses, which are both larger in size and more common in the post-1982 stock (see Table 2).

23. Rural dwellings are, on average, 44% larger than urban dwellings on average based on internal floor area, as shown in Table 3. The difference is smallest for dwellings built between 1919 and 1982 at 16%. Among older dwellings, rural properties are around 57% larger, while among the post-1982 stock the difference is 54%.

25. Connection to the grid allows households to use gas for heating and hot water. Gas is currently the cheapest of the major commercial fuels, so gas grid access can have a strong effect on the cost of heating a home.

26. Figure 3 shows the number of dwellings in rural and urban areas by type. 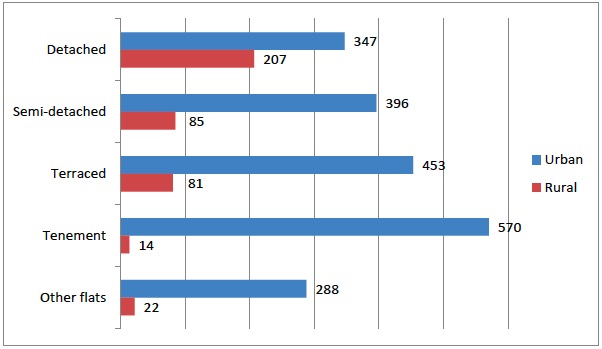 28. The most common dwelling type in urban areas is the tenement flat (570,000), accounting for around 28% of urban housing. Around 58% of urban stock is detached, semi-detached and terraced houses, in total accounting for almost 1.2 million of the 2 million urban dwellings.

29. The primary heating fuel affects the cost of heating and therefore the energy efficiency rating of the dwelling and the risk of the occupants experiencing fuel poverty.

30. The relationship between the type of fuel used, the energy efficiency rating and fuel poverty will be explored further in later chapters. This section examines the distribution of dwellings in terms of the primary heating fuel used and a range of other characteristics, such as age and type of dwelling.

31. Overwhelmingly the most common heating fuel is mains gas: 79% of Scottish households (around 1.9 million) use mains gas for heating, 12% use electricity and 6% use oil.

* denotes cases where attributes appear too rarely to provide an adequate basis for reporting. See section 7.1.6 for table conventions.

32. Gas and electricity are the main fuel types present in 93% of social housing. A further 5% (29,000 households) use some form of communal heating which is very uncommon in the private sector. Conversely, oil is rarely used to heat social housing but is the primary fuel of 8% of private dwellings.

34. Primary heating fuel also varies by type of dwelling. As shown in Table 6, households living in detached houses are least likely to use mains gas for heating: 69% of them do, compared to almost 79% of households for Scotland as a whole and 85% of those households living in terraced houses. This is largely because less than a third (30%) of pre-1919 detached houses use gas as their primary heating fuel; 11% use electricity and 58% use some other fuel source. As shown in Figure 3 this is due to the higher proportion of detached dwellings in rural areas and Table 4 demonstrates that dwellings in rural areas are less likely to be within the coverage of the gas grid.

35. “Other” fuels (than gas or electricity) are most commonly used in detached houses across all age groups. Flats have the highest levels of electricity as primary heating fuel (18%), especially among post-1982 dwellings (27%).

Figure 4: Primary Heating Fuel by Age and Type of Dwelling, 2017 (per cent of dwellings in age/type category using fuel type) 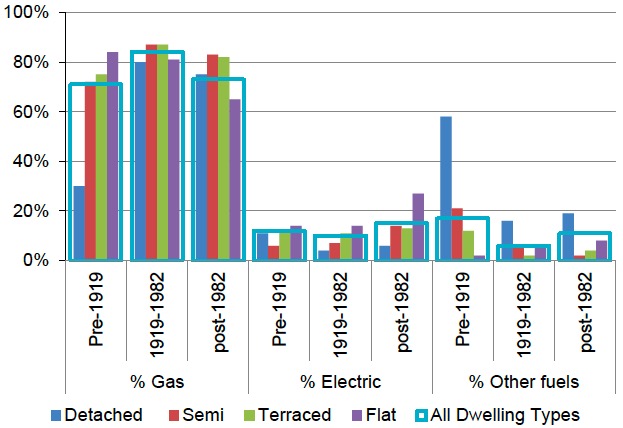 Table 6: Primary Heating Fuel by Age and Type of Dwelling, 2017

36. In this report we describe households in terms of three main types which are derived from the more detailed classification used in the Scottish Household Survey[7]:

37. More details about the definitions are provided in section 7.9.2. This grouping was introduced in the 2015 Key Findings report and is different from the one used in previous reports, where the pensionable age for women was 60 and 65 for men. From 2015 onwards, 65 is adopted as the common age threshold for both men and women for older households reflecting the gradual increase in the state pension age for women.

Figure 5: Proportion of Households in Each Dwelling Type and Age Band, 2017 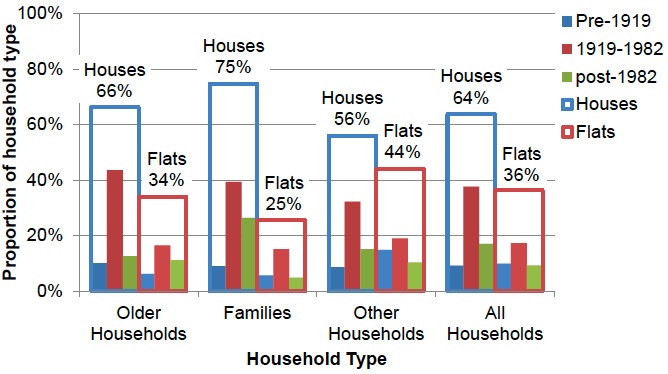 Table 7: Proportion of Households in Each Dwelling Type and Age Band, 2017

40. Statistics on tenure in the SHCS are based on the achieved sample of dwellings in the physical survey and are not calibrated against figures produced as part of the Scottish Government Housing Statistics for Scotland[8] publication or the Scottish Household Survey publication (which is based on a larger sample and different weighting methodology). For estimates of the total number of dwellings by tenure, readers are referred to the Housing Statistics for Scotland publication which uses information from social landlords’ returns which comprehensively cover the social housing sector and therefore provides more accurate estimates of the total stock.

41. In this section we explore data from the SHCS sample which provides more detailed information on the composition of each tenure type.

Figure 6: Proportion of Households in Each Tenure Group by Household Type, 2017

Note: Dashed lines represent the proportion of household type in Scotland as a whole.

42. There are some clear differences in household type across tenure, as shown in Figure 6.

44. The majority of those who rent from private landlords (PRS) belong to other households (61%) and only 12% are older households. Around a quarter of renters in both the private (27%) and the social sector (25%) are households with children, which reflects their share in the national population.

Figure 7: Proportion of Dwellings in Each Tenure Group by Age Band and Type of Dwelling, 2017 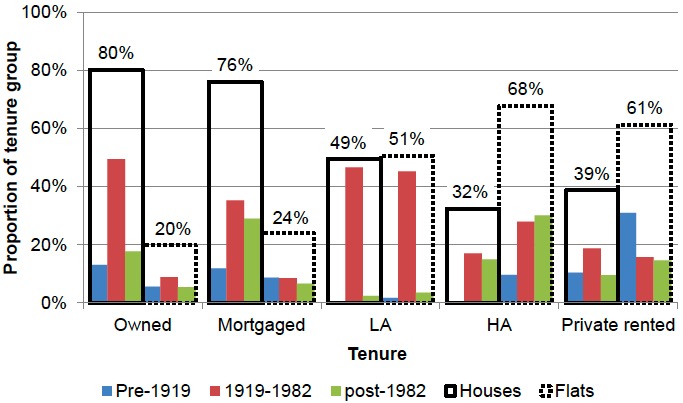 Table 8: Proportion of Dwellings in Each Tenure Group, by Age Band and Type of Dwelling, 2017

48. As we might expect, income and tenure are closely correlated. For social sector residents the distribution is skewed towards lower income groups, as shown in Figure 8, while households with mortgages have the largest share of higher income groups.

49. The distribution of households by income in the private rented sector (PRS) is broadly similar to that for outright owner occupiers. It is generally wider than the social housing sector, including significant shares of both higher and lower income band households.

Figure 8: Proportion of Households in Each Tenure Group by Weekly Household Income Band, 2017 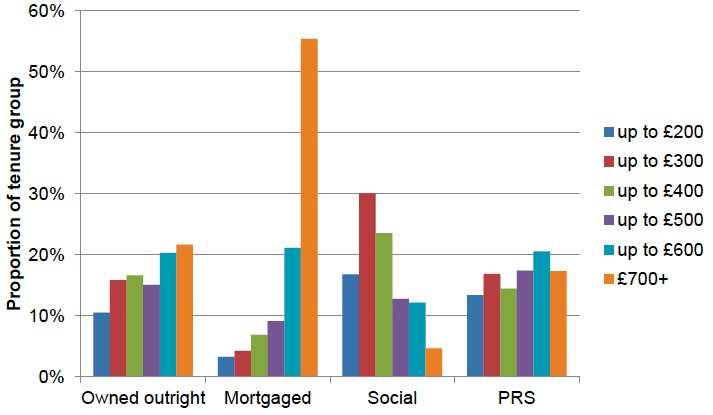