Requirements of the Act

Section 34 of the Act requires that, in respect of each greenhouse gas, the report must:

The report must also set out the aggregate amount for the target year of net Scottish emissions (subsection (2)).

If the method of measuring or calculating net Scottish emissions changes and that change is such as to require adjustment of an amount for an earlier target year, the report must specify the adjustment required and state the adjusted amount (subsection (6)). An adjustment must, in so far as reasonably practicable, be made in accordance with international carbon reporting practice (subsection (7)).

Table 2 provides data for each of the seven greenhouse gases covered by the Act. This includes details of:

The basket of greenhouse gases consists of carbon dioxide, methane, nitrous oxide, and hydrofluorocarbons ( HFCs), perfluorocarbons ( PFCs), sulphur hexafluoride ( SF 6) and nitrogen trifluoride ( NF 3). Greenhouse gases are weighted by Global Warming Potential ( GWP) and presented in carbon dioxide equivalent units. The GWP for each gas is defined as its warming influence relative to that of carbon dioxide, as specified by the Intergovernmental Panel on Climate Change ( IPCC).

Greenhouse gas emissions estimates are provided by Ricardo Energy and Environment and Aether under contract to the UK Government and the devolved administrations. Reports are published on the National Atmospheric Emissions Inventory ( NAEI) website [11] and the latest figures for Scotland are published in the Official Statistics publication Scottish Greenhouse Gas Emissions, 2015 [12] , which is based on data published at the same time in Greenhouse Gas Inventories for England, Scotland, Wales and Northern Ireland: 1990-2015 [13] .

Most emission estimates are compiled by combining activity data (such as fuel use) with a suitable emission factor (such as amount of CO 2 emitted per unit of fuel used). Estimates of emissions from the industrial sector are often compiled based on plant-specific emissions data. Emissions from some sectors are based on more complicated models - such as the model used to estimate emissions from landfill, and the model used to estimate the carbon dynamics in soils when trees are planted. Much of the data on net emissions from agriculture and related land use, land use change and forestry emissions are based on modelled data for Scotland, which are consistent with, but not constrained to, the UK totals and thus are known as "bottom up" estimates.

Many of the remaining emissions sources within the inventory have been collated on a "top down" approach where estimates of emissions have been apportioned to Scotland using proportions of energy use in the UK Department for Business, Energy and Industrial Strategy publication " Digest of UK Energy Statistics ( DUKES)" [14] . This approach is prompted by data availability on emissions being more limited at the sub- UK level.

Scottish greenhouse gas emissions are reviewed every year, and the whole historical data series is revised to incorporate methodological improvements and new data. As a result, both net Scottish emissions and the net Scottish emissions account for each target year are revised every year. The latest published Scottish greenhouse gas inventory (1990-2015) represents the best available data and supersede any previous data, which should be disregarded.

The Scottish greenhouse gas inventory is a subset of the UK inventory, which is assembled using international guidelines that require countries to keep it under review and take account of amongst other things:

All of the revisions to the 1990-2015 Scottish and UK inventories were for one of the reasons above.

Despite the recent downwards revision, there has been an overall upward revision to the baseline to 77.1 MtCO 2e, which is 6.9 MtCO 2e higher than estimated at the time annual targets for 2010 to 2027 were set based on the 1990-2008 Inventory.

Detailed information on revisions are published in the Official Statistics release Scottish Greenhouse Gas Emissions 2015 (Section D) [15] . The most notable revisions are:

Forestry is a carbon sink which means that it removes emissions from the atmosphere. Methodological revisions to the forestry data show that the size of the forestry sink has reduced by approximately 30 per cent over the whole time series compared with previous estimates. Despite these revisions, the forestry sector remains a significant carbon sink in Scotland.

Adjustment of an amount for earlier target years

REASONS FOR REVISIONS. These are described above and in more detail in the Official Statistics Release Scottish Greenhouse Gas Emissions 2015 [19] 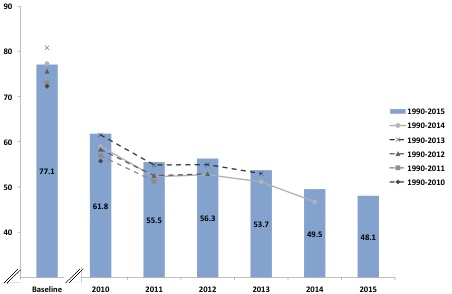