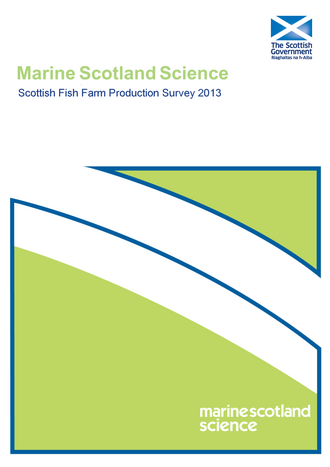 The annual production survey of fish farms in Scotland for 2013 was carried out by Marine Scotland Science ( MSS). This survey collates annual production data from Scottish fin fish farm sites operated by authorised aquaculture production businesses. Surveys conducted by other organisations are produced independently of MSS and may not be directly comparable. The production tonnage obtained is for the wet weight of fish at harvest.

Responses to questionnaires from Scottish fish farming companies covering the period 1 st January to 31 st December 2013 are summarised in this survey. The questionnaires are given in Appendix 1a-d. The survey is structured to allow readers to follow industry trends within the trout, Atlantic salmon and other farmed species sectors. Data from previous years have been reassessed and updated where necessary. To allow direct comparison to data provided in previous surveys, production information by region is presented in defined areas.

The cooperation of the Scottish fish farming industry in completing the questionnaires is gratefully acknowledged. The authors also acknowledge Alan Christie, Sandy Murray, Keith Mutch, Nabeil Salama, Mhairi Sinclair, Ronald Smith and Amanda Walker for their contributions to the production of this report.

L A Munro
A L Warwick
I S Wallace