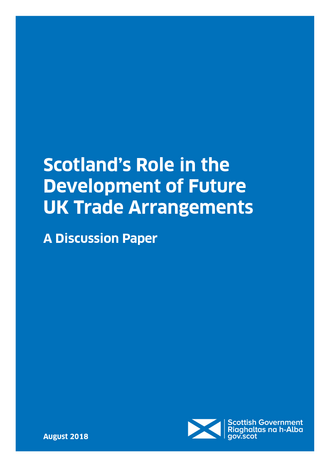 In June 2016, the people of Scotland voted overwhelmingly to remain inside the European Union.

Despite this vote, and the fact that only two of the UK's nations voted for Brexit, the Prime Minister announced in early 2017 that the UK would be leaving not just the EU, but the Single Market and Customs Union as well.

The Scottish Government, notwithstanding our continued support for EU membership, has therefore consistently argued that, if Brexit is to happen, then both Scotland and the UK as a whole should remain inside the Single Market and Customs Union.

The economic facts are clear. The EU is the largest single market for our international exports, with exports worth £12.7 billion in 2016, supporting directly and indirectly hundreds of thousands of jobs across Scotland. Trade with the EU represents 43% of our total international exports, more than our exports to North America, Asia, South America and the Middle East combined. In 2016, a further 12% of Scotland's international exports - £3.7 billion - were to countries with which the EU has a trade agreement.

Leaving the world's largest market-place (which by population is eight times the size of the UK alone) and customs union makes no sense. It is clear that any benefits from the ability to pursue new trade deals would be far outweighed by being outside the Single Market and Customs Union.

However, the period since the EU referendum has been characterised by uncertainty and political turmoil at Westminster. There seems little likelihood of that turmoil abating, and therefore the Scottish Government has to prepare for all exit possibilities.

That includes preparing for an eventuality that means the UK is outside of the Customs Union, however unwelcome and damaging that would be.

Outside the Customs Union, we would lose the EU's negotiating power and expertise and operate in a context in which the UK itself would be responsible for trade deals.

This paper sets out the need for a radical overhaul of the arrangements within the UK for developing, scrutinising and agreeing trade deals. Such an overhaul is required even in the UK continues as an EU Member state and a member of the Customs Union, but is particularly urgent in the context of a 'hard Brexit', in which the UK leaves the Customs Union and Single Market.

The primary aim in all circumstances must be to put in place a decision-making process that protects Scotland's economic and social interests.

Given the instability at Westminster, that protection is more important than ever. It would clearly be unacceptable, for example, for a UK Government to impose trade deals that opened up Scotland's NHS to private competition, or opened up our markets to chlorine-washed chicken or hormone-injected beef.

Trade agreements have changed considerably in the last 40 years, and now affect a wide range of devolved interests, which impact on the interests and daily lives of Scotland's businesses and citizens. The conduct and content of future trade policy and agreements will therefore have very important implications for Scotland. Future trade agreements will almost certainly involve devolved issues. Scotland and the rest of the UK could have very different interests in some negotiations, best addressed before reaching the negotiating table.

Against that context, the way trade agreements are developed within the UK cannot simply remain the same. Scotland wants to be a constructive partner to the other nations of UK and a constructive and fair trading partner to countries around the world. The UK Government's approach so far – which appears to place the interests and involvement of the devolved nations on a par with sectoral interests – must change, and roles and responsibilities realigned, to ensure the interests and priorities of all in the UK are properly represented, protected and promoted.

This paper therefore makes the case for a guaranteed role for the Scottish Government and Scottish Parliament in all stages of the formulation, negotiation, agreement and implementation of future trade deals to protect those interests and priorities. Such an approach would ensure better, more transparent trade policy, which would benefit all nations of the UK, and provide reassurance to future negotiating partners that agreements will endure.

This will require a fundamental change in attitude and approach from the UK Government that has not been in evidence so far during the Brexit process. Instead of undermining devolution, the UK Government has the opportunity to demonstrate that Scotland is an equal partner in the United Kingdom and that the views of the Scottish Parliament are respected.

The main purpose of this paper is to encourage a wide ranging discussion about the best way to protect and enhance the interests of Scotland in the development of future trade deals. We urge as many people as possible to take part in that discussion.

This paper complements the work the Scottish Government is doing to boost exports. We are updating our export promotion strategy in the light of Brexit and other developments, and will have more to say on that in the coming months.