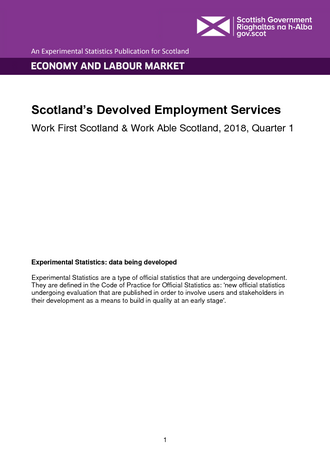 Following the Scottish Independence Referendum in 2014, the Smith Commission set out a range of new powers for Scotland which included devolution of contracted employment support, previously delivered by the Department for Work and Pensions ( DWP). Powers in respect of employability have been enacted through The Scotland Act (2016).

In using the newly devolved powers, the Scottish Government ( SG) made the decision to implement a year of transitional employment support services, commencing April 2017, before the introduction of the new service, Fair Start Scotland, in 2018. Work First Scotland replaces what was Work Choice, the Department for Work and Pension’s disability programme. Work Able Scotland does not replace an existing service, but is a new service supporting eligible individuals with a health condition. Together, Work First Scotland and Work Able Scotland aimed to provide continuity of support and help up to 4,800 people with disabilities and health conditions towards and into work.

Work First Scotland and Work Able Scotland are voluntary services that aim to provide tailored and coherent employment support, via access to a range of specialist services that respond flexibly to the needs of both individuals and their employers.

This experimental statistics release provides information on the first fifteen months of the two services.