No One Left Behind (Experimental Statistics)

No One Left Behind is a strategy for placing people at the centre of the design and delivery of employability services. The transition to this new approach, delivered through a partnership agreement between Scottish and Local Government, commenced on 1 April 2019.

The No One Left Behind approach moves away from funding and delivering a number of separate and distinct employability programmes, to a more flexible approach. Scottish and Local Government are working with third and private sector to deliver support which aims to be more joined-up and responsive to the needs of individuals of all ages and to local labour market conditions.

Since April 2019, a range of Scottish Government funding has been made available to Local Government partners as the scope of delivery under No One Left Behind expands over time. This includes funding for the initial phase of No One Left Behind, from April 2019, the Parental Employability Support Fund, from February 2020, and the Young Person's Guarantee, from November 2020. Since February 2022, the experimental statistics in this publication have included people supported by the totality of these funds. The funding aims to provide support for people of all ages, with a range of differing characteristics and circumstances, including parents, who need help on their journey towards work.

Note that the experimental statistics in this publication relate only to Scottish Government funded activity and do not report on the entirety of employability related activity in each local authority area.

The support provided may vary from short, focused interventions or longer term support, dependent upon individual circumstances. Participants can access the support they require on an ongoing basis and can engage and disengage at times that best suit their needs. Individuals can self-refer to No One Left Behind support, or be referred through a variety of channels, including educational providers, local authorities, third sector organisations, Jobcentre Plus, and other local services.

Reach of services: How many people accessed employability support delivered under No One Left Behind?

The number of people accessing support has varied over time across age groups (Figure 11), with a generally increasing trend from the second quarter of year 2 (July – September 2020). The large jump for the under 25 age group in year 2 (from 811 in October – December 2020 to 1,483 in January – March 2021) corresponds with the introduction of additional funding to support young people in late 2020. The 25 and over group also steadily increased, peaking at 1,444 in the most recent quarter (January to March 2022).

Figure 12: Percentage of people supported through No One Left Behind, broken down by equality characteristic group, April 2019 - March 2022 [37] 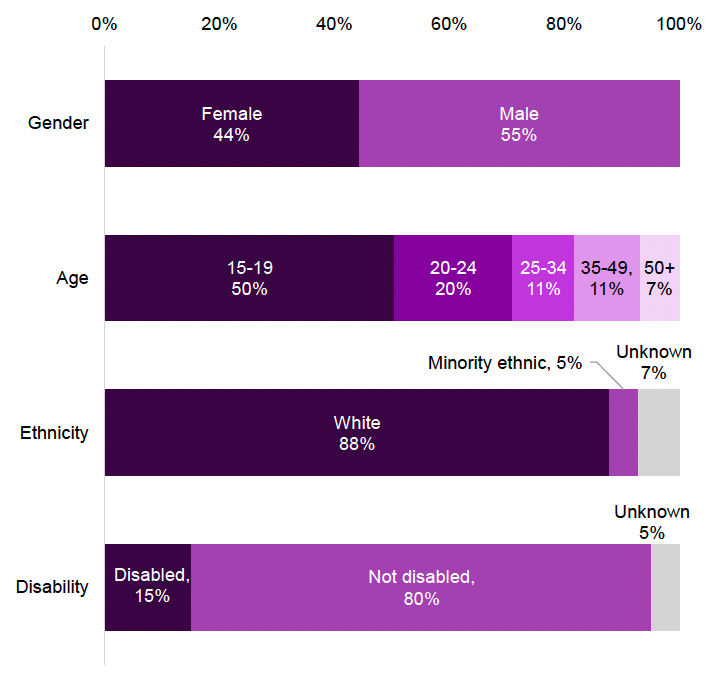 Please note that parents are a subgroup of participants supported during the period April 2020 to March 2022 (year 2 and 3[38]) and so the number of parents is not additional to the number of under 25s and those aged 25 and over. Rather they are distributed across age groups, with 18% being aged under 25 and 82% aged 25 and above.

Parents as a proportion of all people starting to receive support has fluctuated somewhat over the period reaching a peak of 25% in the period October 2020 to March 2021. While there were decreases following this, the proportion has increased from 19% in July to September 2021 quarter to 22% last quarter and 23% in the most recent quarter.

The breakdown of equalities groups for parents is shown in Figure 14. The majority of parents are aged 35-49 years (41%) and this has been consistent over the full reporting period. The proportion of parents was lowest for the youngest (15-19 year olds, 3%) and oldest (50 and over, 8%) age groups.

The gender difference is reversed and more pronounced in the parent subgroup (77% female) than all participants (44% female). Females outweigh males considerably in the parent subgroup across the period; however the proportion of male parents accessing support has generally increased over time, from 17% in April to June 2020 to 26% in January to March 2022 (the latest quarter).

12% of parents accessing support were from minority ethnic groups. The proportion fell to a low of 7% in October – December 2020 and since then steadily rose to peak at 16% in January to March 2022 (the latest quarter).

Overall, just under two thirds (62%) of parents supported were single parents while 13% of parents were mothers under 25.

43% of all parents had one child, 30% had two children, 25% had three or more children, with number of children unknown in 2% of cases. Whilst there has been some variation across the period the pattern is broadly similar; parents with one child represent the greatest proportion of all parents in each period. The proportion of parents with two children has risen slightly in year 3 (32%) compared to year 2 (26%).

The first SMF publication was released in April 2022[40]. The initial data recommendations built on existing data collection practice and activity currently in place between Local and Scottish government, and formalised a number of key data items which we currently collect[41] on the theme of 'progression'. Therefore, it is an appropriate time to start to publish experimental statistics based on that data, aligned to the progression theme.

The flexible, person-centred support No One Left Behind seeks to put in place means that participants may experience support differently, based on their individual circumstances and needs – for example, being able to disengage and re-engage in support as required. As a result, participant journeys will differ in nature and pace, and progression and achievements will vary based on what a positive outcome for the individual would be. This means broadening our understanding of success from a focus on job outcomes to that on the actual steps taken and progress made towards work.

The SMF publication is not a final product and more work is required to develop certain areas and themes. We will gradually develop and align our statistics reporting to the recommendations made by the Framework over time. They will be particularly important to help us understand the journeys and achievements of those who are furthest away from the labour market and to develop the range of data that we publish. The experimental statistics presented here on the progression of participants supported by No One Left Behind represent the first step in that process.

We first published statistics on the achievements of those supported by No One Left Behind in February 2021 for year 1 participants, derived from the aggregate data that was collected during that period. Since then we have developed year 1 data and combined it with data currently collected for subsequent periods, which has allowed us to provide more detailed information for year 1 participants, including their achievements[42].

Progression of participants: What are the achievements of those supported by No One Left Behind so far?

We continue to publish data on people receiving employability support delivered under the No One Left Behind strategic approach. Publishing these statistics will contribute to understanding the impact of the approach, by providing information over time about participant journeys and achievements.

As part of our plans to develop these statistics, in this publication we have expanded the scope of our data to include the achievements of those people who are receiving employability support delivered under the No One Left Behind approach. This has been possible as a result of the development of the previously limited year 1 data, as described earlier.

As delivery under No One Left Behind is expanded over time (see the Delivery Plan) and we learn more about which data are important to report on to describe the journeys of the people who receive support, we will develop a range of statistics that are appropriate. Whilst we expect to produce some statistics that are similar to those for FSS, the range of data that we use and how we present them is likely to change and evolve over time, building a picture of the whole user journey. As already described, a key product to help us realise that ambition will be the Shared Measurement Framework.

To ensure the statistics are developed in a way which is useful to users, we will be asking for views on a range of topics as the development work described above is taken forward. If you have comments or questions in the meantime please contact: employabilitydata@gov.scot.