Scotland's journey to become a Hydro Nation is directly linked to the strategic vision set out in the Hydro Nation Prospectus document published by The Scottish Government in 2012 and subsequently underpinned by the duty placed on the Scottish Ministers in the Water Resources (Scotland) Act 2013. The duty on Ministers to "take such reasonable steps as they consider appropriate for the purpose of ensuring the development of the value of Scotland's water resources" is the touchstone of the overarching Hydro Nation agenda.

The Hydro Nation vision is one of maximising the economic and non-economic value of Scotland's water resources and seeks to draw together and develop the many different threads that make up Scotland's water sector. It ranges from one of the largest and most successful water utility companies in the UK, through an impressively innovative and diverse supply chain, to the academic specialists that support our industry and help develop policy and practical solutions, we have an industry to be proud of. Ours is a vision that seeks to build on the strengths of the sector identified together with our partners, to help deliver against our ambition for Scotland to be a world leader in the responsible management of water resources.

In this first phase of the Hydro Nation journey our focus has been on helping the sector to grow sustainably contributing to the domestic economy and increasing our water profile on the world's stage. We work closely with our enterprise agency partners to better define and understand the sector, providing increasingly sophisticated and better networked support that specifically recognises its needs, but we have not lost sight of the fact that the ultimate beneficiaries must be the people of Scotland. A strong focus on the performance of Scottish Water is central to that, but we also work with other partners to address domestic challenges such as the sustainable provision of rural water and wastewater services.

Hydro Nation recognises the critical importance of innovation in developing the sector. Undoubtedly, a major milestone in Hydro Nation's evolution has been in establishing the Hydro Nation Water Innovation Service ( HNWIS). Demand for the service has been encouragingly high with good progress being made and the new Development Centres operated by Scottish Water Horizons at Bo'ness and Gorthleck hosted their first HNWIS client companies for testing and evaluation in winter 2016.

Scottish Water continues to report on its own excellent progress meeting the highest standards of quality and service in supplying the people of Scotland, and doing this in ever more cost-effective, energy- and water-efficient ways to consistently deliver amongst the very lowest average charges across the UK. As Scotland's single publicly-owned utility it is right that Scottish Water sits at the heart of our eco system. But as Hydro Nation evolved so has there been increasing focus on the wider constituent parts of the eco system; early-stage businesses, entrepreneurs and new and established innovators, and we expect this aspect to develop further as we move forward.

We have also sought to evolve and develop an appropriate strategy to guide Hydro Nation's international activities to ensure they meet Scottish Government objectives in respect of international development and complement the efforts of Scottish Development International in providing support for the Scottish water sector through spotting opportunities at government level in key territories. For example, we have refined our support via the Climate Justice Fund in sub-Saharan Africa to focus almost entirely on Malawi, to help provide access to clean water and sanitation. In India, we are working with a range of official partners to help address some of India's most pressing water problems through the application of Scottish research and technology and we have established relationships with official bodies overseeing the massive River Ganga clean-up project which is expected to provide commercial opportunities for the Hydro Nation by demonstrating our capability while helping improve lives.

In summary, in a relatively short space of time, Hydro Nation has begun to establish a clear identity and constituency involving a wide range of partners across Scotland and beyond. The next stage in the journey must be to build on our networks to widen our community of engagement, ensure that we are doing everything we can to connect the sectors' members and supporting them to grow and deliver partnerships and innovation that can help consumers at home as well as others around the world.

Timeline of the Hydro Nation Journey 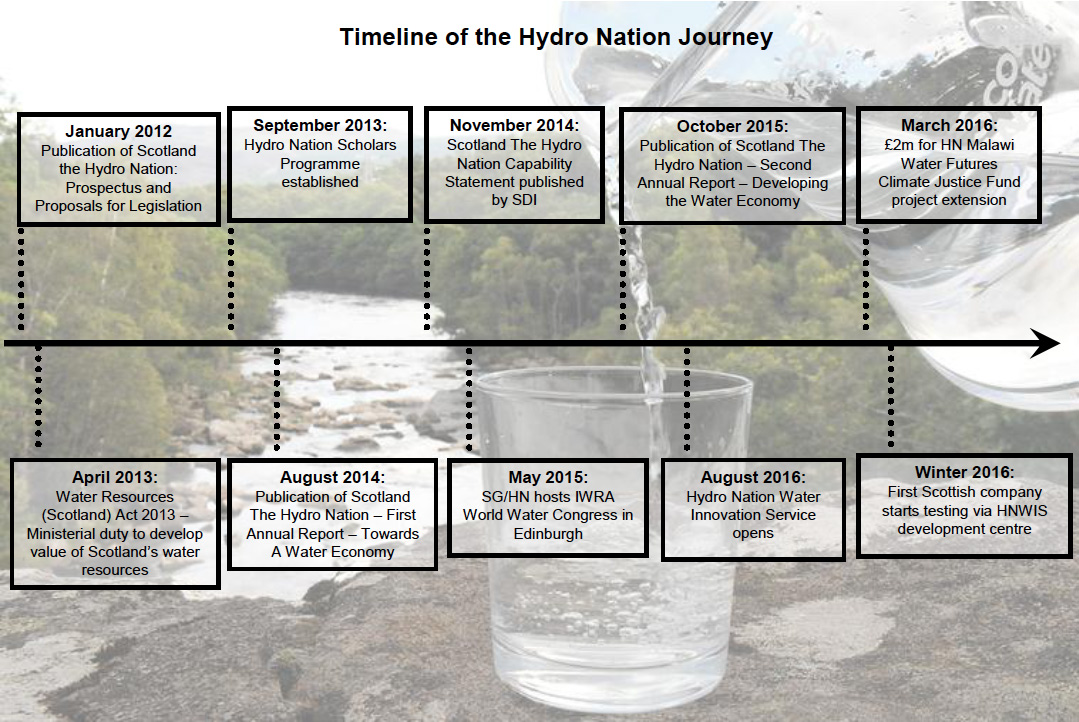