Broadly speaking a property into which a household moves can either be a new let - meaning that the property is new and/or being let for the first time - or a re-let.

SCORE also collects information on the reasons that re-let properties into which households moved during the year were left vacant by their previous inhabitants.

Over a third of all vacancies (34.1%) were created from transfers within social housing (17.4% transferred to another property owned by the same RSL, 9.9% moved to a local authority owned house and 6.8% moved to a property owned by another RSL). This compares to 25.9% of vacancies arising from the previous tenant moving to private sector or other accommodation. 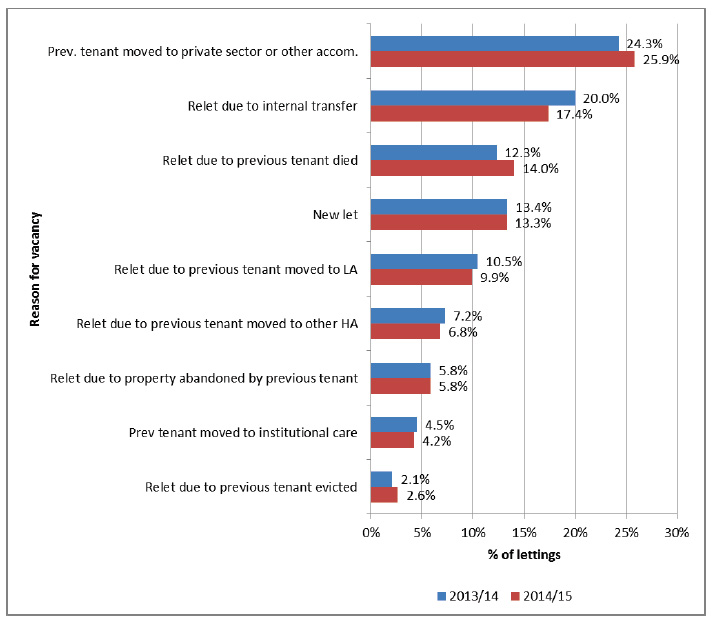 Dwelling Type and number of bedrooms

Chart 8 and table 2 show that almost three quarters (73.8%) of dwellings let out during the year were flats. Amongst these 12.7% of all properties were multi-story blocks, 12.3% were 4 in a block and almost half (48.8%) were tenements or some other type of flat not covered by the other categories. 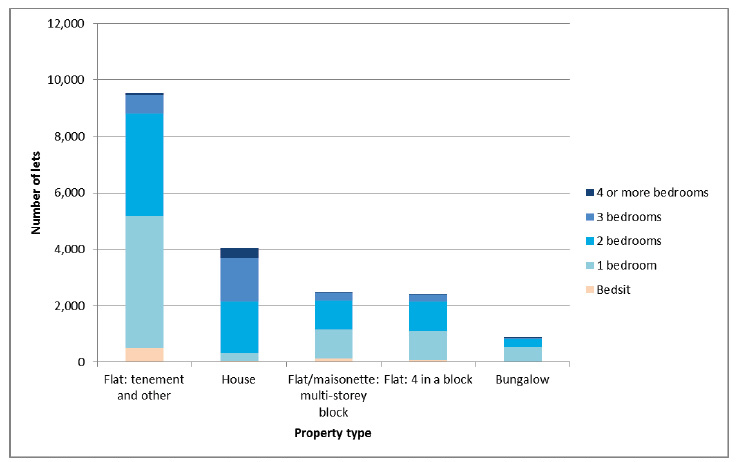 Note: This chart shows the number of lets in each category but please note that this does not represent all lets in Scotland.

A property may be designed for general purpose use or, alternatively, for a specific housing group, such as older people.

The majority of properties let during 2014-15 were general purpose dwellings (85.0%). Housing specifically designed for older people accounted for 13.8% of lettings. Within this 10.0% were sheltered properties - these provide a number of features in addition to the standards for general needs housing (such as an emergency call service and possibly a warden). A further 3.8% were amenity or alarm properties which are either similar to sheltered housing but without the warden or are not adapted but have a community alarm.

A Common Housing Register (CHR) is where Local Authorities and some (or all) housing associations in the area share a single housing list meaning that a household may be allocated to the housing of any participating social landlord. In 2014-15 over two-fifths (41.9%) of households housed obtained their tenancy through a CHR - a 3.9 percentage point increase from 2013-14. This continues the increasing trend in the proportion of households allocated in this way (see Chart 9).

Choice Based Lettings (CBL) is a type of allocation system which allows households to actively apply for properties that match their assessed requirements. Around a quarter (23.5%) of households used a CBL allocation system in 2014-15 - a 1.7 percentage point increase on the 21.8% in 2013-14. As chart 9 shows the proportion of lettings allocated in this way has generally been on the increase. 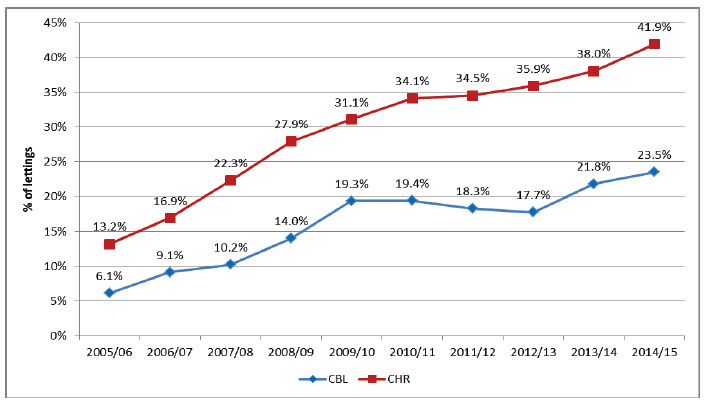 The void period of a property is the period for which it was available for letting but did not have a tenant (i.e. generally the period between the previous let ending and the current one beginning). The void period is derived from the tenancy start date, the vacancy date and, if applicable, the repair completion date provided by the housing association. Details of the calculation are included in the Annex.

The average time for which a property was vacant between the end of one tenancy and the start of the next was 24 days, three days less than in 2013-14. 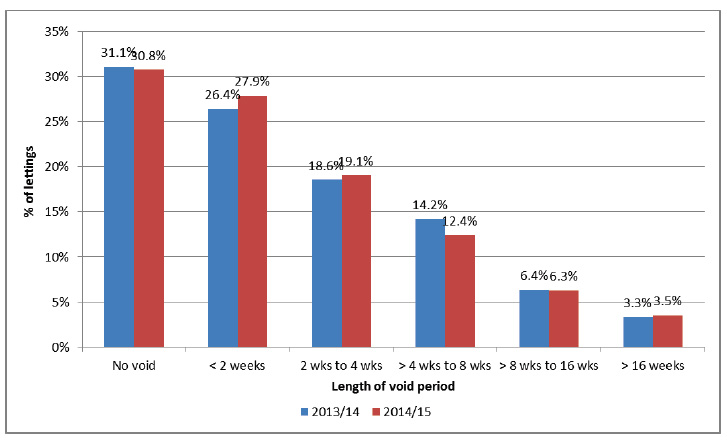