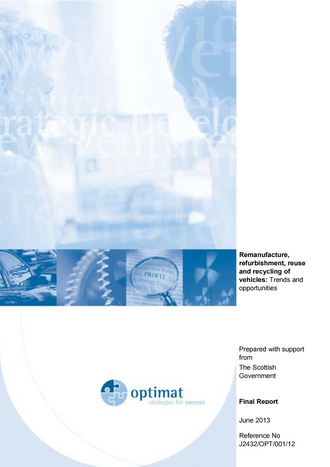 The automotive sector plays an important role in the Scottish economy, despite the lack of passenger vehicle production facilities. Vehicle production continues to be a feature of the Scottish economy in the bus and heavy plant sectors with supporting supply chains. A large number of people are also employed in vehicle sales, service and repair. There are a number of examples of companies that remanufacture and refurbish vehicle parts, such as automatic transmissions and engines. At the end of life of the vehicle, dismantling, parts reuse and material recycling enterprises also contribute value and employment to the Scottish economy.

Long and short term trends faced by the automotive sector

The automotive sector is a significant user of materials and energy in production. Similar to other production sectors, it faces considerable challenges arising from a growing global population which is expected to increase from six billion people today to around nine billion by 2050. In addition to the growth in overall population numbers it is also predicted that consumption per person will increase as developing nations become richer. The combination of these two trends will result in greater demand for resources and subsequent price increases and issues with security of supply (of both energy and scarce materials).

The issue of increasing energy use (with the obvious link to fossil fuel use and resulting carbon dioxide emissions) and broader increasing pressure on finite resources is attracting interest from governments, business and civil society around the world. This is resulting in new policies and regulation relating to resource efficiency and climate change. There is also evidence of businesses taking action to address these strategic challenges and some consumers changing their buying behaviour.

Technological change will also result in vehicles becoming ever more complex, with a shift from mechanical parts to increasingly hybrid mechanical/electronic (mechatronic) parts. These will have higher residual values, meaning the economic case for reuse, repair, refurbishment and remanufacture improves against the alternative of material recycling.

Medium to long term opportunities for the Scottish economy

Figure 1, below, compares and summarises the alternative linear and circular material flows.

Moving to a circular model of material flow is recognised by many leading industrial countries as a potential source of competitive advantage. For example, China, United States and Singapore all have (or intend to introduce) either high level policy commitments and/or research centres of excellence in this area.

A recent report has highlighted the automotive sector as being the largest beneficiary of total net material cost savings of between USD 340 billion - 630 billion per year. This cost saving is predicted to be made, by a range of complex durable products with medium life-spans, through a shift to an economic model where material is circulated in the manner described above [2] .

Figure 2, below, simplifies and summarises the wide range of potential opportunities to generate value and create skilled employment opportunities in Scotland.

This research report identifies a number of opportunities which would be present in such future supply chain, including:

1. Development of refurbishment, service and repair operations at the vehicle level

2. Development of remanufacturing operations at the part, component and sub-component level

6. Development and delivery of education and skills training aimed at schools, colleges, universities and businesses

8. Development of reverse logistics services taking into account concerns over the increasing need for safe handling, storage and transportation of parts and components with increasing electronic composition

9. Development and maintenance of ICT systems for information sharing between different parts of the supply chain about vehicle and part design, disassembly, quality checking, sub-component sourcing, remanufacture and testing

Each part of the potential future automotive supply chain is described in greater detail in section seven along with further discussion on the areas of opportunity.

In addition to the medium to long term trends and challenges faced by the wider automotive sector, this research report highlights the short term challenges faced by parts of the sector involved in reuse and recycling of parts and components (vehicle dismantlers and shredders).

There are around 140 registered end of life vehicle dismantlers (or Authorised Treatment Facilities) based in Scotland and four large mechanical shredders. These enterprises are estimated to process a minimum of 100,000 end of life vehicles per annum, in addition to other metal containing products, such as waste electrical and electronic equipment. Some of these dismantlers work with compliance schemes operated on behalf of passenger and light van producers and importers to report on performance against targets set within the End of Life Vehicle Directive. Section three provides more details about the relevant legislation and market structure.

One of the key issues for the sector is how the extra 10% reuse and recovery will be achieved. Currently the materials not reused or recovered are contained within waste output from shredders known as Automotive Shredder Residue or simply Shredder Residue (as it contains residue from other input materials such as waste electrical and electronic equipment). Currently, in Scotland, the most economic way to treat this residual material is typically to send it to landfill. It is estimated that total shredder residue produced in Scotland is around 60,000 tonnes per annum which represents a significant disposal cost to shredders and a loss of material to the economy. To achieve the 2015 End of Life Vehicle Directive target of 95% reuse and recovery (with 85% being reuse and recycling) the use of landfill must be reduced. This can be achieved by either increasing reuse and recycling or sending more material for energy recovery (or a combination of both).

During the research carried out for this report, dismantlers highlighted several current issues that impact on their business. The key issues reported include:

Further details on the current state of the dismantling and shredding sectors in Scotland, comparisons with end of life vehicle practices in other countries and markets for dismantler and shredder outputs, can be found in sections three to six of this report.

In response to the short term issues identified for the dismantling and shredding sectors, a number of opportunities were investigated and their economic and environmental impacts assessed, relative to a business as usual scenario. Under the business as usual scenario, it was estimated that the economic value generated through parts reuse and material recovery from end of life vehicles, in Scotland, (net of residue disposal costs) was around £32 million per annum in 2011, rising to £45 million per annum by 2030. Net environmental benefits of material recycling were estimated at around £9 million per annum in 2011, rising to over £13.5 million per annum by 2030. The research project created a model to estimate these figures and then compared against three potential short term opportunities.

Figure 3, below, summarises the estimated economic and environmental impacts of the scenarios relative to the business as usual impacts.

The above estimates suggest that the increased economic returns from a 50% increase in reused parts and components represents a good return on the initial investment. This does not quantify the time and effort required by dismantlers, insurers, service and repair garages and others in setting up the necessary infrastructure.

It should also be highlighted that there are investment risks in establishing either a Post Shredder Technology plant or plasma gasification merchant plant to treat shredder residue. These risks relate to the medium to long term trends highlighted earlier where less material would flow through the sector for recycling and energy recovery. If the automotive sector shifts to a model where there are higher levels of reuse, repair, refurbishment and remanufacture then the available feedstock for recycling and energy recovery plants will reduce. The shredding sector is unlikely to enter into long term supply contracts with the types of facilities described in scenarios 1 and 2, above. This means such facilities could face difficulties in obtaining both initial investment and input material in the medium to short term.

The use of Post Shredder Technology and/or energy recovery facilities will, however, play an important role in achieving the 2015 End of Life Vehicle Directive target of 95% recovery. A number of these facilities have already been developed in England and it is not yet clear how the situation will develop in Scotland. One of the potential policy actions, developed as part of this report, proposes funding for a technical study(s) to investigate the feasibility of shredder residue recycling plant as an add on to existing shredder operations or at a merchant plant scale that could be commercially feasible at the estimated Scottish arisings of shredder residue of around 60,000 tonnes per annum.

In response to the issues and opportunities identified during this research project a number of potential policy actions have been developed. These are summarised in figure 4, below, and discussed in greater detail in section nine.

These potential policy actions have been developed in response to issues, opportunities and potential solutions identified by representatives of a cross section of the Scottish automotive supply chain (including dismantlers and shredders), downstream material users, regulators, policy makers.

Consideration of this research report is intended to inform the automotive sector supply chain and government in Scotland of the opportunities arising from short, medium and long term trends. The potential policy options are designed to support the development of these opportunities for the economic, social and environmental benefit of Scotland. The research suggests there is a significant opportunity in the medium to long term to generate value and create jobs through a move to an economic model where fewer resources are used. The research also highlights the short term need to support the UK 2015 End of Life Vehicle target of 95% reuse and recovery by diverting more shredder residue from landfill. The potential policy actions address these key challenges and opportunities.