Contents
Regulation of felling and restocking: consultation
Exemptions to the requirement to have a permission to fell trees 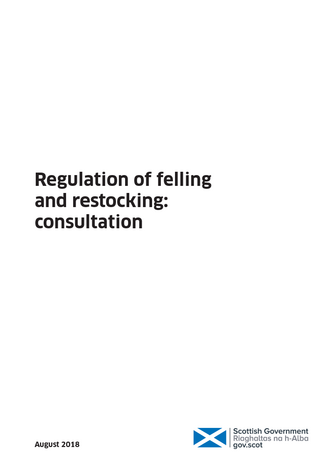 Exemptions to the requirement to have a permission to fell trees

Exemptions describe situations, or types of felling, for which you do not require permission from the forestry regulator. This is to ensure that the regulator is primarily involved in regulation of felling which could lead to the long-term reduction of woodland cover in Scotland through deforestation.

The proposals set out below would be the situations, or types of felling, for which you would not need a permission from the Scottish Ministers and are primarily based on the current list of exemptions from felling licence requirements under the Forestry Act 1967.

We are proposing changes where discussions with stakeholders have indicated that improvements can be made, or where the way in which the 2018 Act is drafted requires some adjustments. Each proposal is described in terms of whether we are proposing a change.

The 1967 Act exempts the felling of trees

It specifies that the diameter is measured over the bark at a point 1.3 meters above the ground level.

Our proposal is that an exemption is created for the felling of trees of a diameter of 8 centimetres or smaller. That diameter should be measured over the bark at 1.3 meters above the base of the tree, where the base of a tree is ground level when the tree is standing.

This would continue to allow the felling, coppicing and thinning of small or young trees up to 8cm in diameter without the need for a permission. Our proposal is not to reproduce the further 10cm exemption ‘to improve the growth of other trees’ or the 15cm exemption for coppice or underwood as both those activities will be captured by the 8cm exemption. Reducing to only one diameter threshold simplifies understanding for all parties. Further, we believe that a separate coppice threshold is not really relevant in Scottish conditions.

The 1967 Act exempts the felling of fruit trees or trees standing or growing on land comprised in an orchard, garden, churchyard or public open space.

Trees growing in these situations do not, generally, constitute a woodland. They may be subject to other protections, such as Tree Preservation Orders, and exempting them from felling regulation does not affect that protection.

Our proposal is that trees in the following places are exempt:

Public open spaces will be defined as those that are:

This could include open areas within public gardens, parks, urban greenspace and trees that form part of the built environment (e.g. those lining streets).

This essentially maintains the current exemption. We are proposing to clarify the term ‘public open space’ as we have heard from stakeholders that this would be helpful. We are proposing to include burial grounds specifically as they are currently only partially catered for by virtue of churchyards being listed.

The 1967 Act exempts the topping or lopping of trees and the trimming or laying of hedges. These activities are not, for the most part, caught by felling as defined in the 2018 Act as they are unlikely to kill the trees. Where they will kill trees a permission will be required.

Our proposal is therefore not to maintain these exemptions as they are not necessary.

The 1967 Act exempts felling where:

(i) the aggregate cubic content of the trees which are felled does not exceed five cubic metres in any quarter; and

(ii) the aggregate cubic content of the trees which are sold by that person does not exceed two cubic metres in any quarter.

Section 9(6) of the 1967 Act defines a quarter as the period of three months beginning with the 1st January, 1st April, 1st July or 1st October in any year.

The exemption is in place to allow low level removal so that the owners of small woodlands can use their resource (e.g. for firewood). It also allows for some management to take place and for the benefits associated with this to be realised without interaction with the regulator as, if good practice is followed, it does not reduce woodland cover.

Our proposal is to maintain the effect of (i) so that felling that does not exceed five cubic metres in any quarter be exempt. For the purposes of this exemption, a quarter is a fixed period in the calendar defined as three months beginning with the 1 January, 1 April, 1 July or 1 October.

We do not propose to maintain a separate limit, (ii) above, for the proportion of those felled trees can be sold as we do not believe that the restriction delivers a tangible benefit in terms of maintaining woodland cover.

We propose however that this exemption will not apply to felling in woodland between 0.1 ha and 0.5 ha and where 50% of the canopy is comprised of the following species:

This is in order to protect woodlands of high environmental value which are likely to be most at risk of being gradually removed by consecutive five cubic meter fells.

Our proposal is to create an exemption for the felling of any trees that pose an immediate danger to people or property, including infrastructure. This exemption would avoid delays in felling where there is an urgent need.

We do not propose to maintain an exemption for nuisance trees, such as trees which are overhanging a driveway, trees which are causing leaves to block gutters, or trees whose roots are damaging pavements, as they are unlikely to require urgent action, meaning that a person could reasonably apply for a permission from the Scottish Ministers.

Compliance with Acts of Parliament

The 1967 Act exempts felling which is in compliance with any obligation imposed by or under an Act of Parliament. It ensures that people who are required to fell in order to comply with another law, are able to do so without first seeking permission from the Scottish Ministers.

The 1979 Regulations exempt felling where the Secretary of State for Defence or the Secretary of State for Trade has certified that the tree obstructs the approach of aircraft to, or their departure from, any aerodrome or hinders the safe and efficient use of air navigational or aircraft landing installations. Aerodromes are defined as any area of land or water designed, equipped, set apart or commonly used for affording facilities for the landing and departure of aircraft.

Our proposal is to create an exemption for the felling of any tree that:

Aerodromes are defined as any area of land or water designed, equipped, set apart or commonly used for affording facilities for the landing and departure of aircraft.

This would maintain the ability to fell without permission, but removes the need for the obstruction to be certified first.

There are several exemptions relating to the building or maintenance of infrastructure in the 1967 Act.

The 1967 Act exempts felling which is carried out by, or at the request of, an electricity operator, because the tree is or will be in such close proximity to an electric line or electrical plant which is kept installed or is being or is to be installed by the operator as:

The 1979 Regulations exempt felling by ‘statutory undertakers’ of trees on land in their occupation which obstruct the construction of any works required for the purposes of the undertaking of those undertakers or of trees which interfere with the maintenance or operation of any works vested in those undertakers. Statutory undertakers are defined as persons authorised by any enactment to carry out any railway, light railway, tramway, road transport, water transport, canal, inland navigation, dock, harbour, power or lighthouse undertaking, or any undertaking for the supply of hydraulic power or water, and public gas transporters within the meaning of Part I of the Gas Act 1986.

The 1979 Regulations also exempt felling by, or at the request of, a water authority established under the Water Act 1973, or an internal drainage board for the purposes of the Land Drainage Act 1976, where the tree interferes or would interfere with the exercise of any functions of that authority or board.

We have been made aware of concerns relating to the consistent interpretation of the infrastructure exemptions and will be working with interested parties to review the existing guidance, with a view to improving or supplementing it.

The 1967 Act exempts felling which is immediately required for the purpose of carrying out development authorised by planning permission granted, or deemed to be granted, under the Town and Country Planning (Scotland) Act 1997.

Scottish Planning Policy states that the planning system should protect and enhance ancient woodland as an important and irreplaceable resource together with other native or long established woods, hedgerows and individual trees. It is expected to be reviewed in parallel with preparation for National Planning Framework 4, which is expected to commence in 2018 with a view to adoption in 2020.

The Scottish Government’s policy on The Control of Woodland Removal, which places a strong presumption against the removal of any woodland including ancient woodland, is how these principles are articulated. It sets out that approval for woodland removal should be conditional on achieving significant net public benefits and this is reinforced in Scottish Planning Policy.

Therefore in light of this our proposal is to maintain this exemption.

The 1979 Regulations exempt felling of any tree of the genus Ulmus which is affected by the disease in elms caused by the fungus Ceratocystis ulmi and commonly known as Dutch elm disease to such an extent that the greater part of the crown of the tree is dead.

A dedication agreement is an agreement, between a landowner and the Forestry Commissioners, that the land it applies to will be managed for forestry purposes.

The 1979 Regulations exempt felling on land which is subject to a dedication agreement and:

The 2018 Act does not provide for new dedication agreements to be entered into, however under section 80 existing agreements will remain in place after the 1967 Act is repealed.

Therefore our proposal is to maintain this exemption for existing dedication agreements.

The 1967 Act requirement for a licence only extends to the felling of growing trees. This means that no licence is required to cover the felling of trees that have been uprooted or those that are dead. The 2018 Act relies on the ordinary meaning of felling (with the addition of intentionally killing a tree, for example by ringing or poisoning) which means that, if there is no exemption, cutting down dead trees will require a 2018 Act permission.

Our proposal is that an exemption is created for the felling of dead trees. This is new and a direct result of the way that the 2018 Act defines felling. To ensure no inappropriate deforestation occurs the clearance of trees that are seriously compromised but still alive would require a felling permission. This includes those that are partially uprooted or have suffered damage as a result of wind, those that are diseased but not yet dead, been damaged by fire, or been damaged by a person (for example by machinery being used in the area

1. Do you agree with the proposed exemptions?

2. Would you like to see any of the proposed exemptions removed from the proposals?

If yes: Which ones and why?

3. Would you like to see adjustments made to any of the proposed exemptions?

4. Would you like to see any other exemptions added to the proposals?