5. Putting recorded crime in context – A comparison with the Scottish Crime and Justice Survey (SCJS)

The preceding sections of this bulletin contain information on the volume and types of crime recorded by the police in Scotland in 2018-19. As highlighted earlier in this report, crime in Scotland is also measured by the SCJS, a national survey with adults (aged 16 and over) living in private households, which asks respondents about their experiences of crime.

The SCJS and police recorded crime cover different populations and different timescales, and the SCJS does not cover the entire range of crimes and offences that the police are faced with. These and other differences mean that making direct comparisons between the two sources is not straightforward. However, the two sources present complementary information on crime occurring in Scotland, so it is therefore helpful and informative to look at these sources together[10]. This chapter will look at police recorded crime and SCJS findings in two ways:

Chart 19 highlights the scale of the difference between the number of crimes estimated by the SCJS and the level recorded by the police. There are a range of reasons for this difference, however the main factor is that the SCJS captures crimes that do not come to the attention of the police, and therefore are not included in recorded crime figures. Therefore while the SCJS is useful for estimating the likely range of crime in the underlying population (and the level of uncertainty around such estimates), the police recorded crime data highlights the level of crime with which the police are faced. 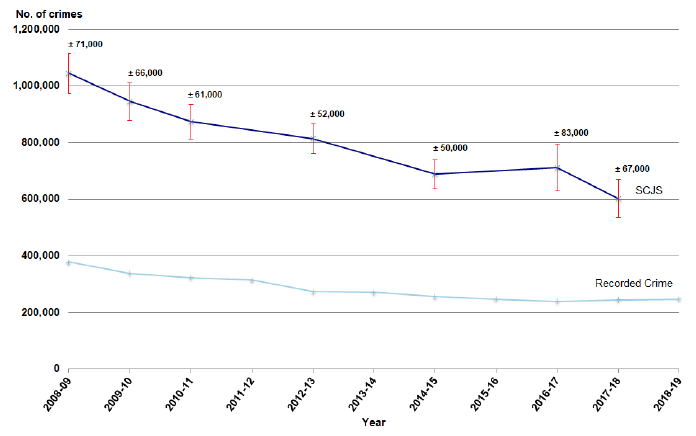 The 2017-18 SCJS estimated that of the 602,000 incidents of crime, 35% came to the attention of the police. In 2017-18, where crime was not reported to the police, the most common reasons SCJS respondents gave for not reporting crime were that the victim perceived the incident to be too trivial to involve the police (35%), or that the victim felt that the police could have done nothing (24%). Where crime was reported to the police it was mostly because the victim felt that it was the right thing to do (40%) or in the hope that offenders would be caught and punished (31%).

There are a number of reasons that the SCJS crime categories do not match the recorded crime groups: principally this is because the SCJS is a victimisation survey and does not collect data on all of the crimes and offences that the police are faced with (e.g. homicide, crimes against business i.e. shoplifting, and motor vehicle offences). This means that making direct comparisons is not straightforward. Comparisons can be made by examining a broadly comparable subset of crimes which are covered by each source and can be consistently coded in the SCJS in the same way as the police would do. Comparisons are made in the following three broad crime groups:

The following section provides an overview of the level of crime and trends in the comparable subset from 2008-09 to 2017-18. Note that this data does not use the most recent year's recorded crime data in order to allow 'like-for-like' comparison with the SCJS.

This analysis has been extended further in the 2017-18 SCJS report, 'Bringing Together Scotland's Crime Statistics', available from: https://www.gov.scot/publications/scottish-crime-justice-survey-2017-18-main-findings/pages/9/

The acquisitive comparable crime group includes bicycle theft, housebreaking and theft of a motor vehicle. In 2017-18, the SCJS estimated that there were 51,000 Acquisitive crimes (+/- 13,000, meaning that the true number of Acquisitive crimes in the underying population is estimated to be between 38,000 and 65,000[11]).

Recorded Acquisitive crime fell by 35% between 2008-09 and 2017-18 and by 2% between 2016-17 and 2017-18. No statistically significant changes were identified in SCJS acquisitive crime across either of these time periods, however this is likely in part due to the smaller sample sizes involved.

Violent comparable crime includes serious assault, common assault and robbery. In 2017-18 the SCJS estimated that there were 172,000 violent crimes (+/- 47,000, meaning that the true number of violent crimes in the underlying population is estimated to be between 125,000 and 219,000, while the police recorded 63,835 violent crimes.

Table 4 shows that the two sources of comparable violent crime data both show large decreases over the longer term, but broadly stable figures since 2016-17. Between 2008-09 and 2017-18, both SCJS estimates and recorded crime violent crime figures have shown a decrease (by 46% and 23% respectively)[12]. Since 2016-17, recorded violent crime has increased by 1%, while the SCJS has found no change in violent crime.

This chapter has brought together the two main sources of crime statistics in Scotland: the Scottish Crime and Justice Survey and Police Recorded Crime statistics. Although each source has a different purpose, by comparing them where possible we can provide a more accurate picture of current crime levels in Scotland.

The latest results from both sources point towards a downward trend over the long term in overall comparable crime, with a more stable pattern over the shorter term.

Table 5: Strengths and limitations of Police Recorded Crime and the SCJS