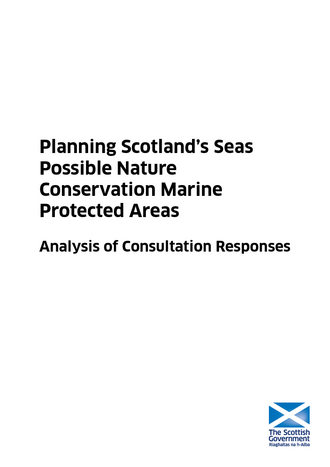 4.1 Several key themes emerged from responses and these are outlined below:

4.2 There were some species that, many respondents felt, had been overlooked and these included: seabirds; whales; dolphins; and porpoises. Support for protecting these species came through a very large number of campaign responses as well as in standard consultation responses; particularly from individuals and the environment/conservation group. There were comments that the proposed network would offer protection to only 39 of the 6,500 species and habitats in Scotland's seas. This would mean that the network was not ecologically coherent and therefore not meet the duty under the Marine Act as well as failing to meet international commitments.

4.3 Seabirds were the focus of many responses and respondents commented on recent data predicting that some colonies could soon become extinct.

4.4 Increasing threats such as lack of food and climate change have affected a variety of species such as common guillemots, razorbills and puffins and respondents reported that other species such as in Arctic skua and black-legged kittiwake had seen significant declines in their populations. A large number supported the sites designated for the protection of black guillemot but many also commented that this is only one out of 24 species that could and should be protected. However, it was not clear from responses how Marine Protected Areas would directly protect seabirds from threats such as lack of food or climate change.

4.5 The feeling that the network should protect more species was the main reason given by those who said that the proposed network is not complete or ecologically coherent.

4.7 Environment/conservation respondents said that the management measures proposed support the status quo rather than making every effort to regenerate biodiversity across the proposed MPA network.

4.8 A number of respondents commented on existing protected areas such as SACs and SPAs and wanted to see effective management in these areas and, where there is an overlap or sites are close to a p MPA, for the management of the MPA to refer to, and align with, the objectives of the existing site.

4.9 There were concerns over conflicts between Government targets for renewables and its goals for the marine environment. Allied to this, respondents from the energy and public sector groups asked for clarification and more certainty over the interaction of MPAs with existing and proposed installations and assets, for example pipelines and cables for oil and gas, renewables, and telecommunications sectors. There was some concern that uncertainty over management measures would discourage investors.

4.10 The international fisheries respondents voiced concern over the economic impacts to their fleets from the proposals and suggested alterations that would still meet environmental objectives.

4.11 Responses from the Scottish fishing sector came from both static and mobile fishing interests.

4.12 The static fishing respondents wanted to see what they feel are non-damaging forms of fishing, such as creeling, shellfish diving, and angling allowed to continue within the p MPAs, but supported a ban on bottom dredging and trawling. Many individuals as well as some from the tourist/ recreation and environment/conservation groups also wanted to see methods such as bottom dredging and trawling removed from MPAs.

4.13 Mobile fishing respondents commented that their methods have been in use for many years without evidence of damaging the environment; many individuals said they believed the opposite to be true.

4.14 There was surprise, mainly from aquaculture and mobile fishing respondents, over the number of p MPAs and the size of the proposed areas; these respondents suggested smaller more localised areas would be more appropriate, targeting more specifically the habitats and species designated for protection. Respondents commented that a lack of knowledge about the extent or location of a species should not be used to create a larger area. There was also some disappointment that more alternative sites had not been identified.

4.15 A number of respondents wrote in support of the Skye to Mull search location being designated.

4.16 Mobile fishing respondents expressed concern over what they termed a lack of regard to both legislative and policy frameworks, which had led them to be unable to support many of the proposals. Respondents felt that these had not been adhered to in relation to network design, OSPAR obligations and replication in particular. This group felt that the resulting impact on mobile fishing would have disproportionate consequences for both individual concerns and on coastal communities as well as for food security.

4.17 Some of the mobile fishing respondents included a list highlighting the species and habitats that do not appear on the OSPAR Threatened/Declining List that they said should not, therefore, appear as a supporting item for MPA designation. These respondents mentioned the black guillemot, in particular, as not being on the OSPAR list of threatened species.

4.18 Several respondents commented on the need for more data and for all decisions to be science-led and based on up-to-date, verified data. Others also called for an external review of the quality and use of evidence used to underpin the p MPA recommendations.

4.19 Robust management and involving all stakeholders, in particular local communities, in managing MPAs was seen as important.

4.20 Many of the comments above were made in relation to one or more of the individual p MPAs. Respondents commented on particular species to include at each site or commented on the size or boundaries or the particular needs of those who live, work or visit the area.

4.21 Overall, there was broad support for the possible Marine Protected Areas.