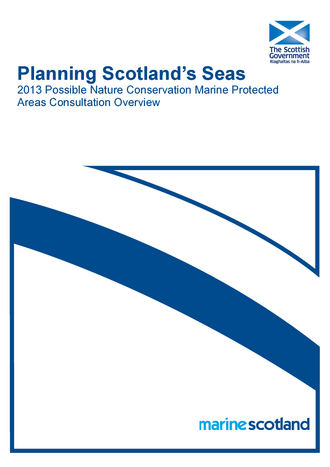 4.1 Figure 6 sets out the process for identifying and selecting possible MPAs. The purpose of this section is to set out the way in which reasonable alternatives have been identified and assessed in the course of this process.

4.2 The process has used a science-led approach. Science has been the primary consideration in the selection of sites. Socio-economic evidence will be considered when the ecological coherence of the network has been met. Ministers also have a power to take account of socio-economic impacts that may arise from a MPA designation.

4.4 The OSPAR criteria have been a key component of the process:

4.5 Key decisions have been undertaken all the way through the process described in Figure 6. These include:

4.6 Further details are provided in SNH/ JNCC's advice to the Scottish Government. Stakeholder engagement has been a key part of this aspect of the MPA process.

4.8 There are also alternatives based around scientific alternatives and pMPAs which are considered to ecologically equivalent. These are described in paragraphs 4.21-22.

4.9 It has been suggested that identification of a coherent ecological network should be delayed, at least until the assessment of the four search locations is complete. The challenge of taking forward the network in the light of existing gaps in the scientific evidence is acknowledged. However, it should be noted that an iterative approach (including refinement of the pMPAs) is a cornerstone of this work, and that the six-year review cycle will facilitate the continued collection of environmental data and activity information. It will also facilitate amendment of pMPA boundaries in response to pressures and changes resulting from both natural variability and human activities. In addition, such a delay would result in significant uncertainty for the marine economic sector. Scottish Ministers are of the view that this work should be progressed, noting that it has taken a precautionary stance.

4.10 The focus of the possible MPAs is to either:

4.11 An alternative to this approach would be to restore and/or enhance features. This possibility was reviewed in the early stages of the process. It was felt that there is insufficient clear evidence to support an objective to "restore". For example, changes to features are not always the result of anthropogenic pressures: natural processes, which are inherently variable ( e.g. in the weather) play a significant role in this. In addition, a "restore" objective would require information about the historic condition of a feature, and this evidence is rarely available. It was therefore decided to utilise the "conserve" and "recover" objectives, as appropriate and on a site-by-site basis, for each of the features.

4.12 The alternative proposals include:

4.13 For certain features there are options and alternatives to represent them in the network. The consultation seeks views on the following choices.

4.15 Therefore the following are the choices as to the representation of offshore subtidal sands and gravels, ocean quahog and shelf banks and mounds in OSPAR Region II:

1. Firth of Forth Banks Complex;

4.16 Irrespective of decisions on alternative representation of offshore subtidal sands and gravels, ocean quahog, and shelf banks and mounds in OSPAR Region II, Turbot Bank remains a possible MPA recommended for the protection of sandeels.

4.17 JNCC identified science-based alternatives to the Central Fladen proposal for the representation of the burrowed mud search feature in the Fladen Grounds in OSPAR Region II. The Central Fladen proposal represents two component features of the burrowed mud habitat: seapens and burrowing megafauna, and the tall seapen ( Funiculina quadrangularis). Western Fladen and South-East Fladen options have been identified as science-based alternative proposals for the representation of the seapens and burrowing megafauna component only.

4.18 All three pMPAs for the seapens and burrowing megafauna component of burrowed mud habitat have been assessed and are considered to be of equivalent ecological value. The tall seapen component of the burrowed mud feature within the Central Fladen pMPA is the known location that adequately represents that component within the Fladen Grounds.

4.19 JNCC concluded that representation of the burrowed mud search feature in offshore waters in OSPAR Region II could be achieved by either taking forward the Central Fladen proposal in its entirety, or taking forward just the part of Central Fladen containing the tall seapens together with one of the two alternative locations for the seapens and burrowing megafauna component.

4.20 Therefore the following are the choices as to the representation of the burrowed mud feature in the Fladens:

2. The tall sea-pen component of Central Fladen, plus Western Fladen; or

3. The tall sea-pen component of Central Fladen, plus South-East Fladen.

4.21 In offshore waters JNCC identified pMPAs with the potential to make an equivalent contribution to the network for representation of features. Atlantic-influenced slope offshore subtidal sands and gravels, offshore deep sea mud, burrowed mud, and an area of the Hebridean continental slope at the northern extent of the range of these features in OSPAR Regions III and V could be represented by either the South-West Sula Sgeir and Hebridean slope or the Geikie slide and Hebridean slope.

4.22 Therefore the following are the choices as to the representation of the offshore subtidal sands and gravels, offshore deep sea mud, and burrowed mud in OSPAR Regions III and V:

4.23 Four areas that have yet to be assessed fully against the Scottish MPA Selection Guidelines remain as MPA search locations ( Figure 2):

4.24 This is to enable further work to be completed on one or more of the relevant MPA search features before SNH provides its formal advice to Scottish Ministers in 2014. The remaining work relates primarily to mobile species features including minke whale, Risso's dolphin and basking shark. The Southern Trench MPA search location also encompasses the burrowed mud feature.

4.25 Shiant East Bank has been identified for the shelf banks and mound feature and finer resolution seabed habitats. Survey work was carried out within the MPA search location in November 2011; however, further information is required before the detailed assessment against the Scottish MPA Selection Guidelines can be completed. This will include information on the habitats and species associated with the shelf bank and mound and also on the functional role that it plays within the North Minch. SNH will provide its formal advice on the Shiant East Bank MPA search location in 2014.

Work on cetaceans and basking sharks

4.26 In July 2012 SNH and the University of Exeter launched a basking shark tagging project, focused on the Skye to Mull MPA search location. The aim of the project is to understand more about the fine-scale use of the search location by these animals. Alongside this, habitat modelling is underway for basking sharks and the three cetacean MPA search features, minke whale, Risso's dolphin and white-beaked dolphin.

4.27 The aim of the habitat modelling is to help understand more about the importance of the Eye Peninsula to Butt of Lewis, Skye to Mull and Southern Trench MPA search locations. The focus in identifying these search locations was on areas considered to be essential to key life stages ( e.g. as nursery or feeding areas), based on the use of effort-corrected sightings data complemented by information on species behaviour/use of these areas. The habitat modelling will combine the sightings/tagging data with relevant environmental data to improve our understanding of what is driving the use of these areas by the different species. Following completion of this work, SNH will consider the results and provide advice to Scottish Ministers on whether these areas should be taken forward as nature conservation pMPAs.

4.28 Twenty-seven proposals for third-party Nature Conservation MPAs were received (Figure 8; a detailed list is provided in Appendix 2). Many of these overlapped with search locations that had already been identified. Others were taken forward, as part of the overall process, and assessed using the Scottish MPA Selection Guidelines.

4.29 Twelve proposals met all the relevant guidelines, and have contributed to the development of eight possible nature conservation MPAs. Twelve proposals were not recommended for further consideration, as these could not meet the test of importance or were not considered to make a significant contribution to the network for the features for which they were proposed. The remaining three have had their assessment delayed / deferred to enable completion of further work by SNH in 2013.

4.30 Alternatives were identified during the MPA identification and selection process, both in terms of the approach utilised and in terms of alternative pMPAs. Alternatives were refined and decisions on the appropriate way forward were made throughout the process. In consequence, the 33 pMPAs identified in Table 2 are considered to be the reasonable alternatives that will achieve an ecologically coherent network. The SEA has therefore focused on assessing the pMPAs as they currently stand, as these are considered to be the reasonable alternatives. SEA of the search locations will be undertaken, as required, once further evaluation is complete.

5.0 Environmental Baseline
3. Approach To The Assessment