The Provision of Courses

4. Scotland is known worldwide as the home of golf. The game was first played in the 16th century on the east coast links and history has endowed the country with many famous courses. As well as serving the domestic market Scotland's courses are top golfing holiday destinations. The tradition of golf, the enjoyment of playing, tourism and media attention all serve to attract and inspire a growing number of players which are the keys to the growth in demand for golf.

5. Today there are over 450 golf courses in Scotland (of which over two-thirds are 18-hole). The provision of 18-hole courses per head of population (1:12,900) is higher than any other part of the UK and most of the world. The vast majority of private clubs are run with modest facilities, and particularly in rural areas and at off-peak times they maintain a tradition of being open to the golfing public. In their capacity as open spaces, golf courses perform other valuable amenity functions, including refuges for wildlife. 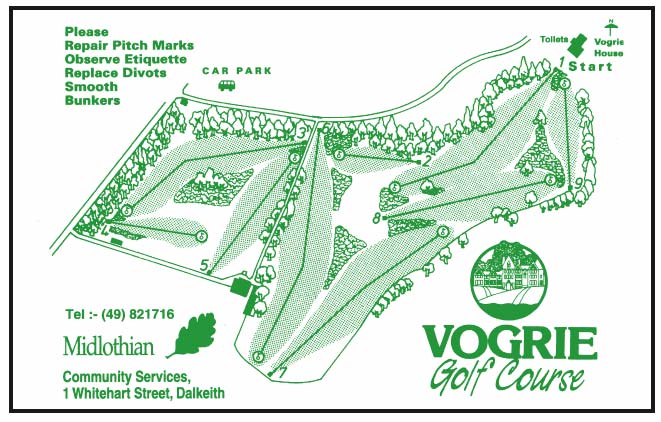 6. Of the 18-hole courses, 263 are private and 49 are municipal. 120 9-hole courses are private and 19 are municipal. In Borders, Dumfries & Galloway and in the Highlands and Islands (including Argyll and Bute) there are over 110 golf courses, just over half of which are 9-hole but there are only four municipal courses; three in Borders and one in Highland. In the central lowlands, Tayside and Grampian regions, there are 340 golf courses, three quarters of which are 18-hole. Even where public provision is high supplemented by current public access to private courses, demand cannot be satisfied around Glasgow, Edinburgh, Dundee and Aberdeen. Overall provision needs to be assessed relative to population, the participation rate, the frequency of play and the physical capacity of courses.

7. SSC surveys undertaken in 1990 indicated that in both urban and rural areas, 15 per cent of the Scottish adult resident population had played golf at least once in the past 12 months (compared to 12 per cent in 1973). Therefore it is in the cities, especially Glasgow where demand is greatest. In particular some city courses are over-subscribed indicating a need for new facilities. Given the density of development in cities it is likely that much of the unmet demand can only be found beyond the built-up area. Within the older urban areas, the scale of vacant or derelict land may offer opportunities for 9-hole courses and practice facilities including driving ranges. This would assist in improving the environmental quality of an area as well as providing a much needed sports facility.

8. Provision of 18-hole units varies from region to region as shown in Table 1. In the four main cities provision per capita is considerably lower than in their respective regions and other areas, although the city figures understate potential access to courses in adjoining districts.

9. In February 1990 the Association for the Preservation of Rural Scotland carried out a survey of proposals in Scotland. Their findings, updated to April 1993, are summarised in Table 2 and illustrated in Map 1. Some of the proposals were only tentative; in others planning applications had not yet been determined but some 70 had received planning permission although progress on construction has been varied.

10. On the whole it has been the proposals for stand-alone (i.e. without related development) and pay-as-you-play courses which have been developed. Forty have been approved and 15 (38%) are under construction or already built. Of the 30 recreational/tourist led projects which have been approved only 3 (10%) are known to be under construction. There are indications that developer interest in the latter type of project has peaked while interest in stand-alone and pay-as-you-play courses is continuing. Even so, fewer than five new courses open each year and it is likely that this will be the order of future development. An 18-hole golf course can cover some 50 hectares, illustrating the significance of each new proposal.

Course Use and Capacity

11. The 15 per cent of adults who regularly play golf could be expected to play 2 to 3 times a month. Consequently as participation rates do not vary greatly across Scotland, course use varies widely. Rural courses may see as few as 12,000 rounds a year but many municipal courses have to withstand the wear and tear of up to 70,000 rounds. Many private clubs in or close to urban areas operate on about 25,000 rounds and in general about 40,000 rounds is a prudent maximum. It is relatively easy to book a game outside the central lowlands of Scotland, but there may be significant over-subscription near the conurbations. The greatest pressure is felt on certain public courses which are fully booked most of the time.

12. The SSC report showed that nearly two-thirds of all golfers travel less than 8 km. to courses, about the same distance travelled by club members. But access to municipal courses, driving ranges and 9-hole courses finds non-members travelling on average 19.5 km. Variations within this range mean that for planning purposes, a 10 km average journey length provides a suitable yardstick. 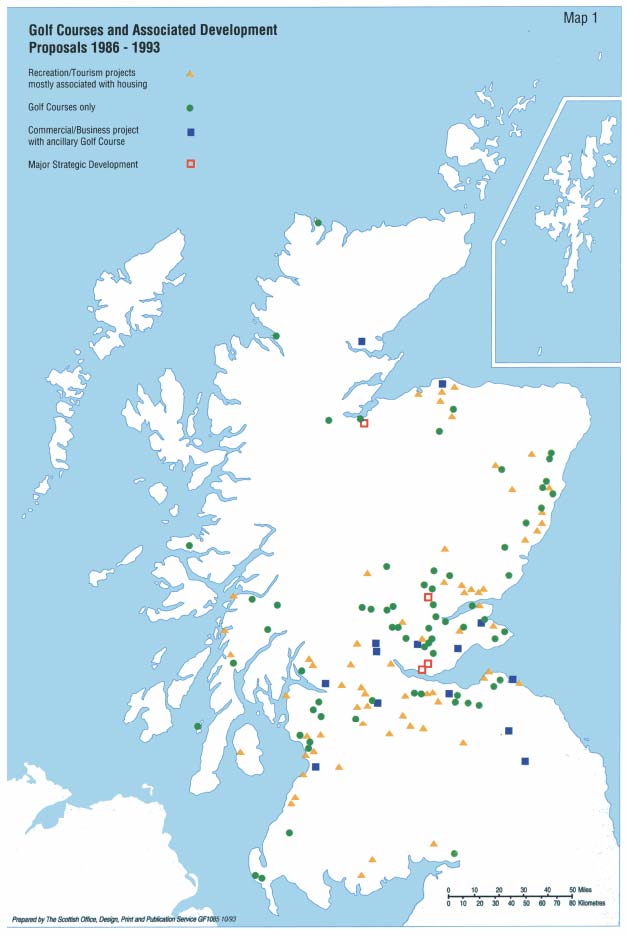 13. The SSC study examined levels of participation in areas of Scotland where the waiting lists, use and capacities of the courses were found to be in balance. Through this approach it established an expected level of the demand for golf. By matching this level of demand against the available supply across Scotland the SSC has been able to review the "Sport 2000" * estimates of golfing provision and has identified an unmet demand equal to the capacity of about 60 18-hole municipal courses in and around Glasgow, Edinburgh, Dundee and Aberdeen.

14. Map 2 illustrates the SSC's priority areas for developing additional provision in response to unmet demand from potential golfers assuming an ideal maximum journey of 10 km. Most of the demand will need to be met on new courses but also through some spare capacity on existing courses and on new practice grounds and driving ranges. Most of the unmet demand arises from the major centres of population.

15. The closer that new courses can be located to major centres of demand, the less distance people will need to travel. The greatest aggregated demand is for the equivalent of over 20 9-hole courses in and around Glasgow. But the areas of opportunity for the construction of new courses extend beyond the immediate centres of demand, in some cases into areas where no specific local deficiency in golf course provision has been measured, for example in north east Fife in relation to demand arising in Dundee.

16. Opportunities for new golf courses are also influenced by other land use and transportation factors and by the greater distances some golfers are willing to travel. Ideally new courses should be distributed so that most golfers have less than 10 km to travel to a golf course. Outside the shaded areas in Map 2, new facilities are less likely to meet the demands of potential golfers. Map 2 should therefore be seen as a guide to the locations which could satisfy the majority of the unmet demand and taking into account the views of the SSC, structure plans could give strategic guidance.

17. Fewer than a third of the club or municipal courses have arrangements with hotels or tourist boards for allocating spare tee-off times to visitors or for participating in package arrangements. Where there is spare capacity, some of the unmet demand could be met on existing municipal and club courses given the will to ensure its release.

18. Map 1 shows that the distribution of the 151 proposals in Table 2 is not confined to the areas where the SSC has identified unmet demand. In areas where provision is already satisfactory, new courses might widen choice locally or offer improved facilities for tourists. In areas of unmet demand however, the SSC will usually endorse new courses and practice facilities.

19. Furthermore the SSC report suggests that demand from golfers to use "country club" style facilities is limited. At existing courses only half the golfers use the bar or changing facilities and a quarter use none of the facilities at all. Sixty per cent of golfers spend less than an hour at the course after the game. Consequently, relatively modest proposals can make a significant contribution to meeting demand. 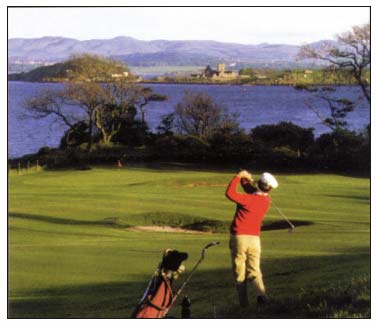 20. Interest in the development of new courses in rural areas arises also from Scotland's golfing heritage and is likely to remain strong. Such demand is generally focused in the vicinity of the famous courses which attract growing numbers of tourists. Tourism development is promoted by the Scottish Tourist Board ( STB), local area tourist boards and the Scottish Enterprise and Highlands & Islands Enterprise networks and is an important employment generator in the diversification of the rural economy. In some cases a foundation of local need for proposals will help to deal with low tourist patronage in the off-season and other factors which beset tourism. In relation to demand for new or enhanced tourist facilities planning authorities are advised to consult the SSC and where appropriate the STB, particularly in rural areas.

21. The likelihood of new prestige golf courses breaking into the championship circuit is relatively remote although they could attract other economic benefits to the area. Already 4 of the 7 British Open courses are in Scotland but access and accommodation difficulties at Carnoustie would need to be resolved before its reinstatement on the Open circuit. In addition Gleneagles hosts the Scottish Open, has good transportation links and hotel accommodation and continues to attract new business activity to the area.