The Challenge set out above is sobering and intentionally stark in setting out the scale and range of mental illness and its impact on both individuals and on society as a whole. It is a challenge to which the Scottish Government, working with the NHS, local government, the voluntary sector and service users and carers has responded effectively over time. There is more to do and the challenge remains great, but the Scottish Government has prioritised mental health and worked to give it parity with other health conditions.

Some high level examples of the improvements that have been made include:

Readmissions - We have seen a steady reduction in the number of people being discharged and then readmitted to services, following work on inpatient and community settings and better discharge planning. Being admitted to an inpatient service has economic and social implications and so reducing readmissions is a necessary quality target. The number of patients who had a psychiatric readmission within one year of a previous psychiatric admission decreased steadily from 4,576 for the year ending 31 December 2004 to 3,426 for the year ending 31 December 2009. The reduction from the baseline figure at December 2004 was 25.1% for those discharged up to December 20096.

Scotland: Number of psychiatric readmissions (7 days or more) within 365 days of discharge (with an index admission of 7 days or more from)

Suicide - the number of suicides reduced by 13.8% between 2000-02 and 2008-10. We have also delivered the HEAT target to train at least 50% of all frontline staff in understanding suicide and being able to work safely with people at risk of suicide. The number of suicides in 2009 was the lowest since 1991 and the number for 2010 also one of the lowest. The graph below shows the change over time using three year rolling averages7.

Dementia - based on work taken forward from 2008, NHS Boards in Scotland now have the highest level of diagnosis in the UK and are the most improved. The Alzheimer Society report 'Mapping the Dementia Gap: Progress on improving diagnosis of dementia 2010-2011' showed that NHS Scotland has nine of the top twelve performing health areas across the UK for dementia diagnosis8. Faster diagnosis of dementia continues to be a HEAT standard and work to increase diagnosis is continuing. Diagnosis allows access to treatment and support, including for carers. We will say more about our work on dementia later in 2012 when we launch the consultation on the next dementia strategy. The map illustrates the rates of dementia diagnosis across the UK. 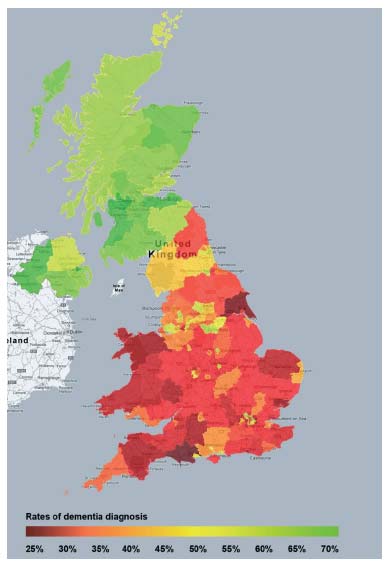 Access to Psychological Therapies - we have introduced a HEAT target to deliver faster access to mental health services by ensuring access to a psychological therapy within 18 weeks by December 2014. Work with NHS Boards on antidepressant prescribing demonstrates that GPs in Scotland are more likely to be working to clinical practice and guidelines than elsewhere9. The gap in prescribing rates between Scotland and England appears to be reducing.

Child and Adolescent Mental Health Services - we are on target to deliver the HEAT target to ensure access to specialist Child and Adolescent Mental Health Services (CAMHS) treatment within 26 weeks by March 2013 and by 18 weeks by December 2014, reflecting a significant service improvement and reduction in waiting times. Data suggests a reduction from over 1200 waits of over 26 weeks when we began this work to around 300 currently. We have further work in hand that will assure delivery of the target. There has been a 34% increase in the size of the specialist CAMHS workforce between the end of 2008 and March 2012.

What these achievements tell us is that it is possible to make significant improvements in the quality and availability of mental health services and that those improvements produce better outcomes for people with mental illness, their families and our communities. These improvements have been delivered through service improvement, redesign, strong leadership and the hard work of NHS, local government and voluntary sector clinicians and staff. That approach is sustainable even as we face economic challenges and we will commit to a similar or greater rate of improvement over the period of this strategy.

The position we are in 2012 is very different to the challenge we faced in 2003 when the new mental health legislation was agreed by the Scottish Parliament. At that time Dr Sandra Grant was invited by the then Minister for Health and Community Care to undertake a review of services within Scotland to assess their readiness for implementation of both the terms of the legislation and the expectations that were placed upon it. Her report identified deficiencies in services across Scotland and made a range of recommendations for improvement10. We have acted on the basis of what that report found and we continue to seek further improvement.

Commitment 1: The Scottish Government will commission a 10 year on follow up to the Sandra Grant Report to review the state of mental health services in Scotland in 2013. The review report will be published in 2014.