We want the behaviours and practices that will support a circular economy to be increasingly mainstream within Scottish society and our economy - ending our 'throwaway culture' and allowing people and businesses to see the inherent value in the products and materials they use. We want people to be motivated to make changes in their lives and for Scotland to be recognised as a global leader.

The circular economy can appear complex or abstract and there is a need to bring the concept to life so we can appreciate its potential for reducing the drain on our planet's resources, and its benefits for business and communities. Throughout this document, we have highlighted public-facing initiatives that can play an important role in communicating this message.

Making the transition to a circular economy will require some significant changes to how people and organisations operate. The more that high profile brands embrace a more circular approach and bring new products and services to market that are as desirable or aspirational as previous versions, the greater the opportunity for consumers to change their habits.

To achieve the level of influence needed across society our approach must be to build a wide coalition of interests, including businesses, the public sector, communities, and NGOs.

To build on the opportunities provided by the Scottish Household Recycling Charter, we will work with local authorities and others in the recycling supply chain to deliver high profile, national communications to drive increased levels of high quality recycling and re-use.

We will build on the success of the #MakeThingsLast initiative and develop new ways to engage people in the benefits of a circular economy, and in particular continue our work with Young Scot to empower young people to help drive this agenda.

The power of attaching a value to goods previously seen as disposable will continue to be our focus for engaging the public and helping them to understand their responsibilities as citizens, building on the success of Scotland's carrier bag charge in sparking high levels of public engagement.

We will further support community-based initiatives which facilitate the circular economy, including through sharing and the exchange of goods and services, and help to make alternative modes of consumption common-place, such as leasing or performance-based models.

Reflecting the priority given to addressing circular economy opportunities in Scotland's Economic Strategy we will work with the Enterprise Agencies, Business Gateway, local authorities, Innovation Centres and others to embed it within their mainstream economic development functions.

Our Scottish Circular Economy Business Network will develop business-led initiatives to promote the opportunities of a more circular approach.

The environment is seen as a complex issue and many Scots believe they are doing all that can be expected of them to help, and many believe that recycling household packaging is doing their bit. However, a survey carried out on behalf of the Scottish Government has found that around half of Scots acknowledge that climate change is an urgent problem, 8 in 10 Scots say they could do more to care for the environment.

Unfortunately being aware of the climate change problem doesn't always lead to action and for many Scots adopting greener lifestyle choices is perceived as being much harder than the reality.

To encourage people to take up greener habits, The Scottish Government launched a climate change campaign. Our aim is to shift the attitudes and behaviours of more Scots to make better lifestyle choices for tackling climate change. The campaign focusses on four accessible behavioural actions: Washing clothes at 30º; Leaving the car behind and walking shorter journeys; Avoiding and recycling food waste; Turning down the thermostat dial by 1°. 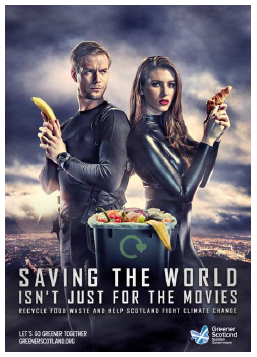