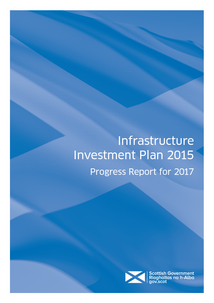 The Scottish Government is firmly committed to infrastructure investment as a key factor in securing economic growth and our focus is on stimulating growth, protecting and creating jobs and promoting Scotland as a great place to do business.

The Government Expenditure and Revenues Scotland ( GERS) publication provides details of capital expenditure for Scotland beyond that invested by the Scottish Government and can be found using the following link:

The Infrastructure Investment Plan includes both programmes and projects. Programmes co-ordinate, direct and oversee the implementation of a set of related projects. Projects have defined start and end points (usually time-constrained and often constrained by funding or deliverables) and are undertaken to meet unique goals and objectives. Projects can be part of a programme but are not always.

The Infrastructure Investment Plan - Project Pipeline is based on the 2015 Infrastructure Investment Plan and is updated on a six-monthly basis. It details projects with a capital value of £20 million or more where the Scottish Government has a lead role in procurement or funding. It also includes school and health projects being taken forward through the Scotland-wide 'hub' initiative which form part of the Scottish Government's current revenue funded £3.5 billion NPD/hub investment programme. A summary of the IIP Project Pipeline at March 2018 by funding type and sector is provided at Annex A.

In addition to publishing the IIP Project Pipeline, the Infrastructure Investment Plan - Major Capital Projects Progress Update is published on a six-monthly basis which provides information on projects with a capital value of £20 million or more which are at the Outline Business Case (or equivalent) approved stage or beyond.

The latest versions of both the IIP Project Pipeline and the IIP Major Capital Projects Progress Update publications can be found by way of the following link:

Major infrastructure improvements have been delivered and significant progress continues to be made. In total over the course of 2017 and up to March 2018, the following infrastructure projects worth £3 billion opened to the public or completed construction within our project pipeline:

Particular highlights in this progress report include:

Projects within the IIP are funded from several funding sources: capital DEL, NPD/hub revenue financed and Regulated Asset Base ( RAB) (for rail projects). The Scottish Government also has the power to borrow up to £3 billion, with an annual cap of £450 million for capital purposes. Borrowing is added to the total capital grant funding available to determine the overall availability of capital, therefore we do not distinguish between capital grant funded projects and those funded by borrowing.

In order to ensure choices are sustainable the Scottish Government has in place a 5% affordability cap, whereby annual revenue commitments will not exceed 5% of the total block grant from HM Treasury. Committed projects plus planned projects and planned borrowing currently peak at 4.3% in 2020-21 and therefore there is headroom within the 5% ceiling.

It should be noted that following the reclassification of Network Rail from a private to public sector organisation, the funding regime will change from 2019-20 and rail projects will become entirely grant-funded. HM Treasury will take on responsibility for debts accrued by Network Rail in Scotland. In the interests of maintaining comparability current modelling of commitments contain estimates of the Network Rail investment as if it had been RAB funded.

The Scottish Government has disbursed a total of £1.8 billion in FTs to 31 March 2018 with a further £1.5 billion available over the period 2018-19 to 2020-21, excluding recycling of any repayments. Our repayment profile, as agreed with HM Treasury and updated annually, incorporates our first repayment of £51 million by March 2020. For the financial year 2020-21 onwards we anticipate a fairly even re-payment pattern based on at least an 80% repayment rate which reflects known and anticipated repayments. The majority of FTs to date have been allocated mainly to support housing and regeneration schemes, support for businesses through Scottish Enterprise and investment in energy efficiency measures over the medium to long-term. There have also been short-term allocations to support farmers which, in general, are repaid the following financial year and made available for re-cycling.

Infrastructure Investment contributes to economic development and supports jobs. The contribution made by the individual projects is detailed in the IIP Major Capital Projects Progress Report on a six-monthly basis. This includes, where possible, the number of jobs supported, the number of sub-contracts awarded to Scottish firms and the number of graduate, apprenticeships and work experience placements positions created.

Publicly funded social housing and mid-market rented ( MMR) attracts matching private investment across the housing programme. There will be variations for individual projects but social housing grant pays approximately half the unit build cost with the remainder being funded by lenders. For many of our innovative MMR schemes supported by loan funding, the private finance leverage can be much higher, generating significant investment at scale into affordable housing in Scotland.

The IIP Project Pipeline includes the capital value of revenue funded projects through NPD and hub. These projects may also have a capital funded element. The revenue funded element is paid through unitary charges for a period of 25-30 years once the project is completed and is funded from resource budgets. The annual estimated unitary charges are published on the Scottish Government website by way of the following link:

The graph provided at Annex B shows the total unitary charges payable each year in nominal and real terms. The nominal values represent the cash payments that will be made and the real figures remove the effect of inflation. The largest elements of the unitary charge relates to construction and financing which, under the terms of the NPD and hub contract, are not linked to inflation therefore in real terms these costs reduce over the period of the contract.

The Net Present Value ( NPV) is calculated here as the value of all future cash flows over the entire life of the project, discounted to the date each contract was signed. In accordance with the established HM Treasury Green Book principles, the discount rate applied to calculate the NPV removes the effect of inflation and adjusts for social time preference. The future cash flows and therefore the net present values for each project reflect the capital, financing costs, project company running costs and contracted maintenance costs for each project. With the exception of the two major roads projects which have an operational period of 30 years, the future cashflows for each project cover an operational period of 25 years.

The table provided at Annex C provides the total unitary charges payable for each project and the associated NPV value.

This overview summarises the approach to infrastructure investment that Scottish Government is following to support the economy and deliver high quality public services. Investment is maximised through not only utilising capital grant but delivering infrastructure through revenue financed methods, capital borrowing and levering in additionality from the private sector and other sources. The IIP Progress Report and associated IIP monitoring reports set out in more detail the scale and diversity of the infrastructure programme, use of a variety of funding routes and the associated economic benefits.