This information is drawn from statistical information and is intended to provide a summary of the information about pupils with additional support needs.

The most common additional support needs are (see Annex A for further info on this): 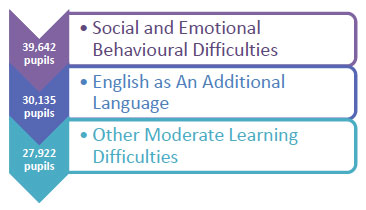 A disability under the Equality Act 2010 is if you have a physical or mental impairment that has a ‘substantial’ and ‘long-term’ negative effect on your ability to do normal daily activities.  There is a clear interaction between the disabilities and additional support needs, but the terms are not interchangeable.  Annex A sets out further information on the this.  The image is the design developed by Grace Warnock as part of her campaign to recognise invisible disabilities https://twitter.com/warnock_grace 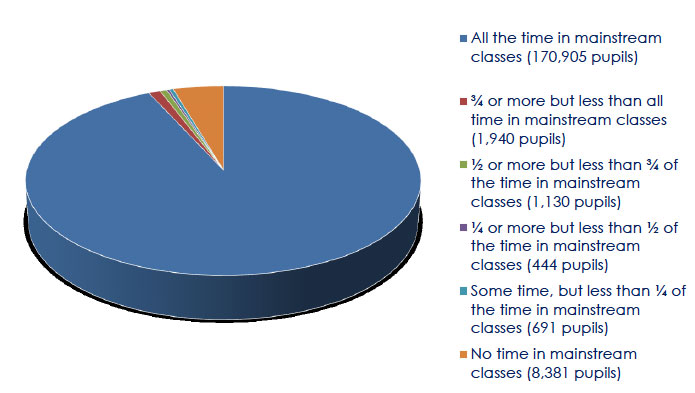 Areas where there is little change include that boys continue to be more likely to have additional support needs, and those learning in special schools continues to be relatively static.

2017-18 has been a significant year for the development of implementation in additional support for learning and related policies.  Consequently, there have been a significant number of public consultations from the Supporting Learner’s team.  These have related to:

Regulations on Complaints to Ministers (section 70), Data Collection on Additional Support for Learning, and Dispute resolution

Non-Statutory Guidance on assessment of capacity and wellbeing

Guidance on Complaints to Ministers (section 70)

Guidance on the presumption of mainstream education, and

Guidance on the provision of healthcare in schools

A number of these consultations related to the extension of rights to children under the Additional Support for Learning Act.  This significant development came into practice on 10 January 2018 and is the largest extension of rights to children and young people in this field across Europe.  Rights are extended to children aged 12-15, who are able to use their rights.  Those rights are almost the same as those enjoyed by young people and parents, the exceptions being that the right to make a placing request, the right to be a party in mediation (although children’s views are now required to be sought and provided as part of mediation processes).

The code of practice for additional support for learning, was updated, and published on 20 December 2017, alongside non-statutory guidance on the assessment of capacity and adverse impact on wellbeing.

In support of children using their rights the Scottish Government established the My Rights, My Say service.  This service which is delivered through partnerships between Enquire, Partners in Advocacy, and Cairn Legal offers:

The service was established on 10 January 2018.  Importantly, an MSYP was part of the process of evaluating the bids for the service and in selecting the preferred suppliers.  Demonstrating our commitment to ensuring that children and young people are enabled to influence key decisions on policy delivery.

There were also further developments with the transfer of the Additional Support Needs Tribunals for Scotland into the new first tier tribunal structure.  The Tribunal will look and feel very similar for those who use it, but will benefit from consistency of approach across other Tribunals.  The specialism of the Additional Support Needs Tribunal’s functions and its staff have been recognised and preserved as part of this change.  This change came into practice on 12 January 2018.

The consultation on guidance on the presumption of mainstream education ran from 2 November to 9 February and drew 362 responses.  The analysis of these responses will be drawn together with the outcomes from the research in the experiences of pupils, families and those who provide support in schools and authorities.

The Young Ambassadors for Inclusion have an important role in shaping and developing policy and its implementation.

The Young Ambassadors for Inclusion are young people with additional support needs who have been nominated by their local authority to join a network which provides an opportunity for them to share their views and experiences of Scottish education. A total of 26 local authorities have been represented since the network began.

Through discussion and activities, the Young Ambassadors have identified the ways they feel schools are doing well in their provision of inclusive education and also where improvements could be made.  Their views have influenced the development of policy, and have shaped the guidance to children about the Tribunal, and how Tribunals should work for young people.

The Inclusion Ambassadors met with John Swinney, Deputy First Minister and Cabinet Secretary for Education and Skills on 21 June 2017.  The Ambassadors spoke to Mr Swinney about work they had done on the themes of Friendship and Belonging, Positive Attitudes, Awareness, Asking for Help and Support (see below).

A significant development in this year has been their film 'Ask Us, Hear Us, Include Us'.  The Young Ambassadors were keen to share their views on what works in inclusive education. They decided to create a film which could allow their views to be heard and help staff understand how to support young people with additional support needs.  As you will see from the film, they were involved in all aspects of its development.

In March 2017 the Education Committee considered the implementation of Additional Support Needs.  The Committee reported on 15 May 2017 and John Swinney, Deputy First Minister and Cabinet Secretary for Education and Skills responded to the Committee’s recommendations on 26 July 2017.  A number of the actions highlighted above are reflected in the response to the Committee.

This report sets out a range of information to provide an overview of the implementation of the additional support for learning Act during 2017 and early 2018.  The report highlights that there are strengths but also challenges for implementation, and as we strive for continuous improvement, we will seek to build on strengths as we address challenges.  It is fitting that the final word in this report is given to the Young Ambassadors for Inclusion.  These are the conclusions on ‘Support’ that they presented to John Swinney, Deputy First Minister and Cabinet Secretary for Education and Learning on 21 June 2017, and which we seek to embody in our further work on implementation.